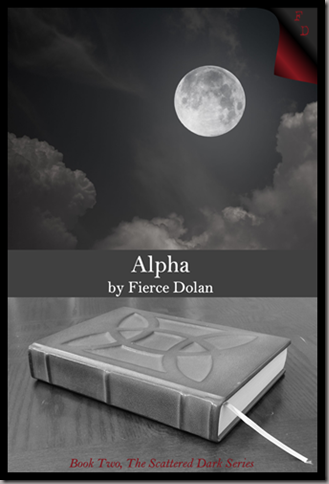 Alpha The Scattered Dark Series Book Two Fierce Dolan Genre: erotic horror, hardcore paranormal erotica, BDSM Publisher: Fierce Desires Date of Publication: 23 October 2013 ISBN: 978-0-9860165-6-1 ASIN: B00G4V1ETU Number of pages: 53 Word Count: 15,857 Cover Artist: Fierce Dolan Amazon Book Description: When domme Alaine Dunham meets beautiful, young werewolf Seth, she dreams of training him to be the perfect bottom to fill her Alpha needs. She quickly finds that gentling the wild wolf is one thing; subduing the rebellious human is another. Tensions mount as the full moon pushes them to consummate their bond before relationship concerns are soothed. After a strange book falls into Alaine's hands she begins to doubt her relationship, her instincts, and the moon. Book One, Journal of a Lycanthrophile , is free on Amazon starting December 2 Alpha by Fierce Dolan   Chapter 1 A wolf. Alaine Dunham didn’t have to see him for that familiar life force to course through hers, for her body to ache to be near his—the telltale signs. Several years had passed since those sensations last sizzled up her spine, thudded behind her ribs, pooled hot and wet at her cunt, and she relished them. Scouting him from her vantage point on the stage, seeing his wild allure, got her even hotter. The dark man clutched the hand of Hostess Kisha. Her rainbow-plaited head bobbed, a kaleidoscope beacon glinting under the strobing lights as she squinted and guided them through the fray on the glittering dance floor. The shifter pressed through the crowd with his shoulders squared and jaw jutted forward. A lock of wavy black hair obscured his eyes. His swagger betrayed that he was young, anxious, needy, though the power that emanated from him told her he was not newly made. Dancing clubbers parted and stared in his wake. Alaine jumped down from the stage and waited for him to find her, as he most certainly would. She busied her trembling hands by slapping a cat-o-nine against her thigh. The welts that rose on her skin distracted her from the aching want between her legs. Licking her lips, she sighed and slowed her slamming pulse. If she was half the top she and the patrons of Malice in Fundaland thought she was, he’d be trained to knot in no time. Finally, a worthy conquest. Shaking her ponytail down her back, she pulled her shoulders up and greeted Kisha. The waifish hostess clasped Alaine’s hand and kissed her cheek, conservative affection considering they had tribbed all afternoon, culminating with the caramel-complexioned beauty creaming on her face around sundown. Fraternizing amongst staff was forbidden, so they kept their bennie trysts secret. Smiling, she tucked a colorful ringlet behind Kisha’s ear and nodded to the lovely man. “Mistress,” Kisha started, “this is Seth. He’s a regular on the scene, though it’s his first time in Malice.” His gaze roved over Alaine as the smaller woman spoke. “He asked for you. He knows the best when he sees it.” “Ah.” She resisted the urge to rap his thigh with the flail handle. “I’m booked out several nights. Hostess Kisha can get you on the books for another evening.” The wolf’s piercing gaze met hers, though his long lashes fluttered and his voice wavered. “Nice to meet you, thanks. For now, I’ll watch.”