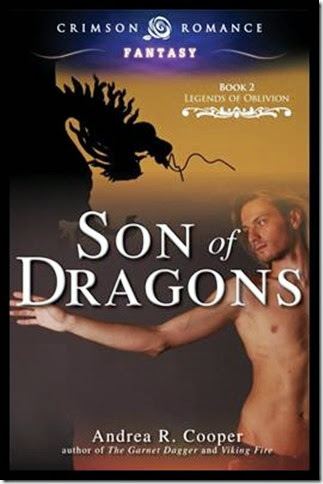 In a time of false peace, the dead rise as soldiers for the Warloc’s scheme. For thousands of years he has stood ready for the final battle. Though the witch and her cursed Elvin have destroyed his physical body, now with his protégé, he has honed a new way to wage war.

Shunned by her own people and weary-hearted from centuries of lost loves, Elvin warrior Mirhana scours the land to silence the undead. Her heart has turned as cold as the sword she wields, until a prince seeks her aid.

Never has Prince Landon met a woman like Mirhana. Both beautiful and deadly, she haunts his dreams. The battle at hand becomes more enchanting than fighting to remain true to his unseen betrothed.

When a traitor emerges, new alliances are tested and the only remaining hope is to follow the prophecy and find the ... Son of Dragons.

Books in the Legends of Oblivion Series

Clean from the bath, Landon let the air from the open window dry his hair. Dressed only in trousers, he leaned against the windowsill.

He thought he smelled the hint of roses and heat on the breeze. Movement from the street below caught his eye. He leaned out, squinting into the night.

Torches lined the cobbled street corners. A cloaked figure waited. Then the innkeeper rushed outside. His hands flew in gestures as the figure nodded.

Then he pointed to the window where Landon watched. At the same instant, the cloaked figure followed his finger’s path to Landon. Green eyes that seemed to glow met his.

Landon jumped up and cursed when his head hit the bottom of the window. When he looked back, both figures were gone.

Thinking the innkeeper would send guards, he waited with his sword in hand and his stare riveted on the door. No one came. He must be getting paranoid, thinking there was a ghost or enemy around every corner. His eyelids grew heavy as he waited for a fight that failed to materialize. Finally, he rolled his shoulders back to ease out the tension.

Still, he couldn’t stop thinking about those piercing emerald eyes. They’d belonged to a woman; he could tell. There was intelligence and cunning in them. Her stare felt as though she saw through the façade he often wore as prince and to please others, and into his kajh.

A woman who was not afraid, but used to being feared. It unnerved him, yet excited him. His pulse quickened and his loins tightened at the thought of those eyes filled with passion for him.

Better get some sleep before the night was gone. Tomorrow, he’d tell Gillespie about what he saw. He doubted he could explain those captivating green eyes that continued to haunt him even now.

“We are introduced to new and wonderful creatures, and meet up with those we know and love from the first book, as each character's unique role and journey begins to intersect... and each will have a pivotal role in the outcome of an epic battle that is about to take place. Deception, self discovery, and sacrifices will be made, as each character's true role is uncovered... and in these magical lands, nothing is at it seems…Still, the book builds on the last with new and enchanting worlds, exciting creatures, and breathtaking originality. ..A really fun read, and a complimentary addition to the Legends of Oblivion series!”

Character Bio: Landon has been sheltered in the palace his entire life. He yearns to be free, yet wants to earn the respect of his people and father in battle rather than in blood and title. That I would give my life to see Mirhana and my kingdom safe.

That I have had dreams of making love to Mirhana in the clouds.

I am afraid of being in a loveless marriage with Kavith, my betrothed. Her letters leave me feeling empty inside. She is full of conceit and arrogance.

I want to love Mirhana and roam the countryside with her.

I cannot give away too much, but I am betrothed to Kavith at the beginning of the book and I fall in love with Mirhana.

I usually have a servant who picks out my clothes and dresses me. It was an adventure when I had to wash my own clothes in a hot spring.

Rebel enough to leave my palace behind in search of a woman whose description from my liegeman made my mind fantasize about her. However, her inner and outer beauty when I met her far outshined my imagination.

Loving Mirhana – or rather convincing her that she loved me.

Being in love with Mirhana and being able to marry her without starting a war with Kavith’s kingdom.

I worry about the deadwalkers threating my kingdom. I worry about the Warloc and his protégé that is determined to raise him from the dead. I am worried about my betrothal with Kavith and my love for Mirhana.

My dragon pendant, because it was given to me by my grandmother.

My determination to complete something.

The Warloc’s protégé because she has infested the land with the deadwalkers and it will be worse if she brings the Warloc back from The Forgotten Lands.

Following my father’s last order of my betrothal before he succumbed to an illness that leaves him unable to move or communicate.

Since I am a man, it would loyalty.

There are many … how can I pick just one? Kindness to those who need it.

Richard Cypher/Rahl from the Sword of Truth series. I admire his determination to be with his love despite all the obstacles.

Stephen King – how he can create all of the stories he does and still sleep through the night amazes me.

I would change that I was born a prince. I would rather be a normal person.

Live life to the fullest. 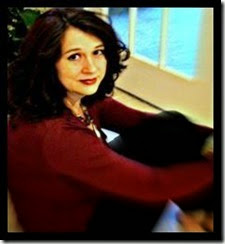 Growing up in Houston, Texas, Andrea has always created characters and stories. But it wasn't until she was in her late twenties that she started writing novels.

What happened that ignited the writing flame in her fingers? Divorced, and disillusioned by love songs and stories. They exaggerate. She thought. Love and Romance are not like that in the real world. Then she met her husband and realized, yes love and romance are exactly like the songs and stories say. She is now a happy wife, and a mom to three kids (two boys and a girl).

Andrea writes paranormal and historical romance. When not writing or reading, one may find Andrea dancing in Zumba.