What began as a half-baked scheme to help his brother win the man of his dreams has become a tailspin Joss can’t escape. His actions and secrets have kept him from making any real claim on the woman who captured his attention months ago.
But secrets have a way of coming to light.
Maddox has known from almost the beginning Joss has been playing games with his life. What he doesn’t realize is how deep the man’s deception runs. When Cade and Dylan’s wedding reception brings everyone together in one place, the entire story is revealed with a little help from Benton.
And Hell hath no fury like a man with nothing left to lose.
The implosion Joss has braced for has finally come to pass, changing everything forever. With Jamie and Hawke in another country, enjoying their happily ever after, Maddox is about to teach Joss a valuable lesson in toying with other people’s lives.
What happens when bad decisions, manipulations, good intentions, and misunderstandings combine? It’s an Ugly Eternity.

How the pair didn’t feel all the eyes upon them, Benton couldn’t explain. They were standing close enough Benton could make out every letter of Jamie’s name spelled out in permanent ink across the inside of Hawke’s forearm. Knowing Jamie, as he did, the man couldn’t care less who was watching them. He didn’t relent until Hawke was laughing so hard no sound emerged. Benton went back to watching Maddox. There was something about the entire situation niggling at that back of his mind. Something slightly off. Maddox was so focused on the pair he’d yet to notice Benton, leaving him free to puzzle it out.

This man had cheated on Hawke, throwing everything away. By all accounts, he should’ve let this go a long time ago. He’d broken things off and moved another man in. His expression said none of those things. Benton glanced around, Hawke and Jamie were still dancing. Sophie and Joss were in the corner having an up-close discussion. How had Joss came to be with Sophie over the last few months? None of it made any sense. If Maddox had put Hawke out and moved Joss in, why would Maddox watch Hawke instead of Joss? Benton’s gaze returned to Maddox. Maddox smiled at the sight of Hawke’s laughter and Benton knew. It was exactly like someone ripped back the curtain, revealing the real story.

Maddox visibly startled at Benton’s cry. He couldn’t stop. The truth slammed into him with such power Benton couldn’t contain it. It brought him to his feet. Maddox lifted his glass to his lips, taking a sip. Benton wondered if the man was attempting to hide his emotions before focusing on him.

“Didn’t see you there,” Maddox said after a moment. Benton ignored Maddox’s statement of the obvious.

“Oh my god,” Benton repeated, pointing at him. He didn’t care if he looked like a madman. 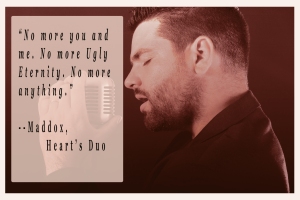 $5.00 USD Amazon gift card
a Rafflecopter giveaway
This tour has been Organized & Hosted by