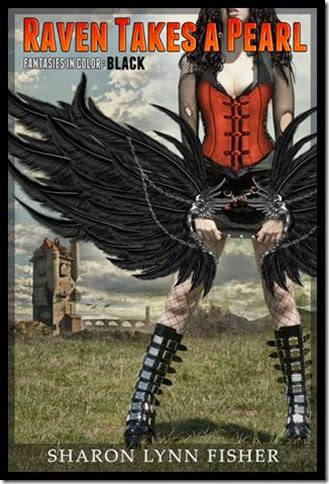 Pearl knows it was Raven who stole her mama's heart -- a beautiful quartz stone given to her by Pearl's father right before he died. She sets off alone to the crow-man's keep determined to bring back the stone, but she's caught by a servant and taken to the tower.

The dark-winged ruler of the keep isn't at all what she imagined, and he isn't about to let Pearl go before unlocking all her mysteries -- mysteries she never dreamed her body possessed.

Available for $1.99 at AerBook

We pass through a corridor lit by more of the strange lamps, most notably an octopus with an arm span of a dozen feet and a large green light bulb for a head. A clock is mounted just under the bulb, and as it strikes the hour, the arms begin to adjust their position along the wall, accompanied by the unmistakable sound of grinding gears.

Wilkes catches me eyeing it and says, “Master makes them all himself.”

“Who is ‘Master’?” I reply, fear sharpening the edges of my voice. “Where does he come from? Who made him like that?”

“Same as makes us all, Pearl. The Maker.”

“You mean to say he was born like that?”

“Are any of us as we were when we first separated from our mothers’ bodies?”

This sounds like something my pa would say, and is not at all the sort of chat I want to have right now.

“What makes him do it?” I demand. “Why does he steal things?”

“Master Raven acquires objects for his inventions. Cast-off things, or things the owner will not long miss.”

“Ha,” I grunt, “and what would a silly old crow-man who has no use for other living souls know about that?”

Wilkes follows me down the corridor, so he can’t see it’s not only anger that’s choking me up. But also I can’t see what he thinks of my answer.

At the end of the corridor we climb a dizzying number of steps that wind upward like a corkscrew. We rise up through a hole in the floor into the “workshop.”

Workbenches line the walls, and every surface is covered with what look like machines in various states of repair or assembly. There are heaps of “acquired” objects up here as well, and I steal a quick look around the room for Ma’s stone.

The tower has but one large window fitted with amber-tinted panes, so it’s only moderately brighter than the rooms below. More lamps range around the perimeter, but these mostly use clear light bulbs so it feels less like being in a submersible — or at least what I’d imagine a submersible to feel like. Near the window is a tall easel holding a stack of parchment. Symbols and numbers and diagrams have been scratched over almost every inch of the first sheet. I notice now that many sheets, similarly scrawled upon, have been hung along the walls. Some of the diagrams seem to be carefully labeled drawings of Raven himself.

“Here, Wilkes,” he calls, and Wilkes takes me by the arm and leads me over to the easel. Next to it is a sort of stand, shaped like an X, with a system of straps and buckles.

I jump as the manservant pushes me toward the stand, and the moment my back touches it I begin to fight him in earnest.

“What are you doing?” I demand, shoving at his chest.

Wilkes doesn’t reply, but he uses his body to seal me against the stand. His eyes bore into mine, transmitting something hot and alive, as he raises my arms over my head.

Raven joins us, and I cry out as he fits leather cuffs over my wrists and ankles.

As Wilkes withdraws, Raven steps back, cradles his elbow in one hand, and props his head on the other, watching me.

“What do you want from me?” I shout, straining against the cuffs.

His brow furrows as his eyes move over me. I’m not sure he’s heard me.

He drops his arms and moves to stand directly in front of me. We regard each other, my heart vibrating my chest, and I become aware that the fear that grips me is changing — in a way I don’t understand well enough to explain to anyone, including myself.

My heart still hammers. My breaths come faster. I am afraid. But something warm and velvet is awake and moving low in my belly.

Raven reaches for a lever and tugs it gently. The X-stand tilts backward, angling my body.

He draws nearer, reaching a gloved hand to the top fastening of my corset. I gasp as he runs a finger from the hook, along the ridge of the corset, tip grazing the soft, rounded flesh above. His finger passes back and forth, my breath increasing with his momentum, until finally his fingertip stops just above my nipple. He presses into the soft flesh and then suddenly tugs upward.

My nipple pops free of the corset. Heat builds between my legs and my mouth waters. He meets my gaze, and my lips part, short puffs of breath moving in and out. His fingertip slides down, and with the soft leather of his glove he begins to slowly rub.

He ducks his head closer, positioning the magnifying device over his eye and focusing it over my nipple. I feel the cold metal of its tip pressing against me, surrounding the small red flower.

“Hold very still,” he says, and I try to stop breathing. But it’s not possible.

Character Bio: Pearl is a young woman who’s grown up in a small steampunk town. She lives in a simple cottage with her mother. Her father died in a mining accident, and his last gift to her mother has just been stolen — a large chunk of rose quartz that Pearl refers to as her “mama’s heart.” She believes it was taken by a part-man, part-crow creature everyone calls Master Raven. 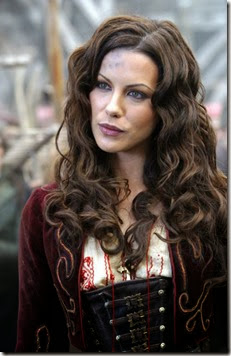 Best: There’s not much I’m afraid of. Worst: “Stubborn as the kettle is black” (says my ma)

I prefer other folks keep their distance and only know what I see fit to reveal.

If I tell you, it isn’t much of a secret, now is it? But if you really want to know, it’s that I want a bigger life than the one I’ve got. Don’t ask me what that means exactly, because I don’t know yet.

That I’ll lose my ma, too. Or that someone will hurt her. Or that I might hurt her.

To walk up to that tower, confront that winged nightmare, and take back my mama’s heart. I’m going to do it, too.

I got my ma, and that’s all I need. Though I’d give my right arm if I could get back my pa.

Oh I do like a bit of shiny. Red ribbons in my corset. Emerald lace trimming my petticoat. Bright silk neckerchiefs. My pa even gave me a peacock feather for my favorite hat.

I don’t know for sure what you mean by that, but I don’t stand for anyone crossing me or taking what’s mine. And there’s nobody who can make me do anything I don’t want to.

Ask me again when I get back from the keep.

That’s a word I don’t understand. You’ve got a roof over your head or you don’t, see? Folks that love you, or not. I’ve been luckier than most. I don’t think I’ve ever been happier than waking up on a chill morning to the sound of a crackling fire and Mama kneading bread dough and humming to herself.

I’d say that’s a question for folks who’ve got more time than sense. But I AM mad as hell at that Master Raven.

Now you’re the one asking me all these questions. You tell me.

People who nose into my business.

Our Mayor. My pa’d be alive if not for him, I know it.

That my pa had to die because I didn’t fancy that greasy old man.

My pa was the best man alive, and he was gentle and kind and smarter than anyone I know.

She uses the sense The Maker gave her instead of pretending she hasn’t got any.

My pa once read me A TALE OF TWO CITIES. There was a fellow who gave his life to save another man from the cabbage chopper.

I’d like to be better to my ma. I frustrate her sometimes, and I’m sure to bring her to sorrow someday.

Never trust a person who gets you to answer questions you never intended to. 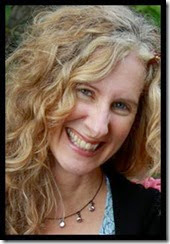 An RWA RITA Award finalist and a three-time RWA Golden Heart Award finalist, Sharon Lynn Fisher writes stories for the geeky at heart — meaty mash-ups of sci-fi, suspense, and romance, with no apology for the latter. She lives where it rains nine months of the year. And she has a strange obsession with gingers (down to her freaky orange cat). In addition to her erotica stories, she’s authored three science fiction romance novels for Tor Books: Ghost Planet (2012), The Ophelia Prophecy (2014), and Echo 8 (2015).