Book Blitz and Giveaway: Cursed Ever After Ever After Series Prequel by A.C. James 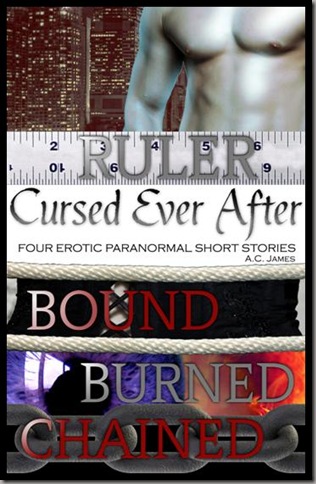 Cursed Ever After
Ever After Series Prequel

Arie is having a bad night but what else is new? When vampires deal with demons nothing less can be expected. He heads to the Hellfire Club to report back to his sexy boss, Tessa Green, anticipating that she’ll be less than satisfied with the details of his night. Instead he finds a hot new hire waiting in her office. Alone in the office, she offers him an intriguing opportunity to improvise.

Luna is always tied up in difficult situations. Obsessed with someone she can never have. From the moment Luna first met Victoria, she knew she was different—hot, dangerous, and unlike anyone she’s ever known. Luna can't stop thinking about her. Can't stop fantasizing about her. Can't stop craving the one thing she knows she can never have. The one she wants—the vampire she wants abstains from blood and sex.

To distract her from her obsession, Luna begs Tessa to find an appropriate diversion. Bound and gagged in her dungeon at the Hellfire Club (HFC), Luna gets an unexpected visit from a sibling that leaves her feeling conflicted and heartbroken. Arie steps in when Luna is vulnerable. Is there more to this hot alpha vamp than his hard-ass facade?

Victoria has a sordid past and this macabre tale is woven with lies, blood, betrayal, and vengeance. In the far north of France in the 1700s she took care of a young girl and her ailing mother. She never planned on falling for Henri in the process—except she fell in love with the wrong man. She fell in love with a monster. Sometimes evil hits too close to home. And when you trust the wrong person you might just get burned.

Outside the club gunfire erupted. It was probably just a gang shooting. But the cops didn’t give a rat’s ass. This part of the city was like a third-world country at war but as long as it didn’t interfere with business, we wouldn’t get involved. The Hellfire Club was situated on the South Side of Chicago. It operated as a Goth club downstairs and an underground sex club on one of the upper levels. In a world where the supernatural commingled with humans largely unbeknownst to humankind, the club provided a perfect cover. Of course, our high-class clientele and the few humans on our staff knew about our kind.

I inhaled deeply and prayed for patience. Tessa wasn’t going to like the price increase the med tech at the blood bank required to keep us in supply. What was I supposed to do? The half-demon masquerading as a human had stood there with that twisted-as-fuck-smile and when I tried to dazzle him, he seemed completely immune to my tactics. I’d come here to report back to Tessa and it wasn’t likely she’d let this one go.

Muttering obscenities, I walked across the black marble and Luna looked up from her post behind the bar.

She pursed her lips but didn’t respond to my mercurial mood. It was probably for the best under the circumstances. Throw in any of my primal instincts—sex, violence, blood-hunger—into the mix, and it would turn ugly for her. If not for this business with the blood bank, I’d screw her despite my preference for human partners. But for her I’d make an exception.

Luna had pale, luminous skin that almost matched my own and a stream of silvery beams trailed behind her. Even her hair, including her eye lashes sparkled silver. Usually she batted her eyes at me appreciatively but at the moment she just looked disgusted and I didn’t have time to deal with a pissed off faerie.

The elevator button lit up when I pressed it and after a few moments the door slid open. I took the elevator to the third floor and made my way down the dimly lit hallway to Tessa’s office. Someone was having sex in the building. At any given time someone was screwing in the club but as I walked, the scent of arousal grew stronger, making my body tighten and my balls throb. Damnit, resistance was growing increasingly hard and painful, as my dick was at this moment.

I brushed past the stony faced guard outside Tessa’s office. He was bigger than me, nearly as tall, and his short blond hair stood in spikes. Growling, I brought my fist up when he grabbed me with a muscled arm bearing a tribal tattoo that ran its length. My fist made contact with his jaw and he let out a curse.

tour wide giveaway of 1-$5.00 Amazon Giftcard (image attached) and 1-E-book Copy of Cursed Ever After: 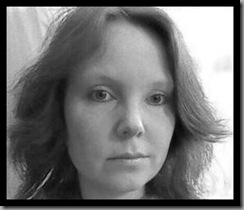 Wife, mother, and storyteller extraordinaire. She resides in northeast Pennsylvania drinking large vats of coffee while taming two toddlers by day and writing by night. She enjoys wine, sushi, sake, and curling up with a good book. A.C. loves to hear from readers!