Author Interview with Jen Minkman author of The Waves. 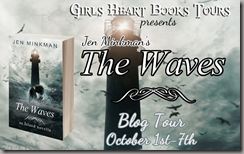 Today on the blog we have author Jen Minkman for an interview. Her new release The Waves was just released. Let’s find out more about her and her novel.

I dreamed of becoming an astronomer when I was little. When it turned out I needed to be a maths whizzkid for that, I had to let go of that dream, but I always thought I could write cool stories about space travel and stars later in life :) So far, I haven’t written a real sci-fi book yet, but I’m working on one.

When I found a publisher in the Netherlands willing to take on my manuscript (in Holland, I am trade-published).

Oh, quite long! I queried for a full year before my current publisher e-mailed me and asked me to call him. (In Holland, we don’t work with agents; writers query the publishing houses directly)

I teach English and Dutch at a secondary school in The Hague and I love it! I like languages and I always try to make the kids enthusiastic about them too.

What is the name of your latest book, and if you had to summarize it in less than 20 words what

My latest book in English is called The Waves, and the summary would be something like:

‘When Walt discovers his world isn’t quite what he always believed it to be, how much is he willing to let go? And does he need to?’

In Holland, I’m represented by Ellessy Publishing House. Across the border, I self-publish my books (which I translate to English myself).

I usually write paranormal/romantic stuff, so more of that is definitely coming up in the near future. My next book (‘The Boy From The Woods’) is slated for release in English in December 2013 (and in Dutch in January 2014), and I have yet another paranormal romance that needs to be converted into an English book and will be called ‘The Space In Between’.

They all fall into the YA/NA category, whether they be dystopian (like The Island series, of which The Waves is part 2), paranormal, sci-fi or contemporary.

Reading Stephenie Meyer triggered me to write a paranormal romance with a Native American theme. (because I like Jacob very much!). After that, the paranormal stories just kept bubbling up and I kept writing. I love YA, because it’s somehow more innocent and less gritty than adult fiction.

I like all my characters, but I think two of my favourite ones are Josh (the brooding hero in Shadow of Time) and Saul (the bad guy in The Island and The Waves). I loved writing them.

I wrote my first story on my dad’s typewriter when I was ten, and I haven’t stopped since. I guess reading inspired me to write: I was a real bookworm when I was a kid, so I was always engrossed in some exciting fantasy story (my favourite genre as a child).

I can basically write anywhere as long as I have my laptop with me: in my study, in the living room, in coffee bars, on trains… Once I start writing, it’s kind of hard to stop me, really! I don’t have a routine, but I do have to feel relaxed and undistracted. That’s when I can switch on my ‘hyperfocus’ (courtesy of a light form of ADD) and have a go at it for hours on end.

Yes, I do. It’s always nice to see what people thought of one of your books, even if they hated it. I might learn something from bad reviews, but they don’t stop me from writing stuff I like to write.

Both! In the case of The Boy From The Woods, the title came first, but in the case of Shadow of Time, I had to think for a long time before coming up with that title. The Island wasn’t very hard to come up with, and The Waves was an easy choice too.

Mostly, I just go with the first name that comes to mind. I think you subconsciously pick a name that suits the character you’re about to create. In the case of some character names in the Island, as well as place names in Shadow of Time - they are inside jokes for my sister, who reads all my stuff. :)

Do you decide on character traits (ie shy, quiet, tomboy girl) before writing the whole book or as you

As I go along. The characters manifests themselves as I write them. I hardly ever decide on someone being like such-and-such before I start writing a book, unless a certain character trait has a pivotal part in the plot.

Are there any hidden messages or morals contained in your books? (Morals as in like Aesops Fables

No, I’m not that preachy. But people somehow always take away something from my stories, even if I’m not consciously aware of putting messages in there.

I’m not a big fan of hardbacks. I love buying ebooks, but I always want the paperback version if I like a book enough to read more than once. I call them the ‘keepers’ and my bookshelves are full of them :)

I love way too many books to have one favourite, but there are a couple of books I keep re-reading: The Tricksters by Margaret Mahy, The Power of Five book series by Anthony Horowitz (the old edition), The Mother Earth Trilogy by Thea Beckman (a Dutch author) and The Martian Chronicles by Ray Bradbury.

Some books transfer very well to movie. I liked what they did with Beautiful Creatures, but I hated what they did to one of my favourite Dutch childhood books called ‘Letter to the King’. That movie was LAME. :(

Remember to check out today’s spotlight to find out where you an find Jen and The Waves.

Email ThisBlogThis!Share to TwitterShare to FacebookShare to Pinterest
Labels: Interview