Book Blitz and Giveaway: Martuk ... the Holy by Jonathan Winn 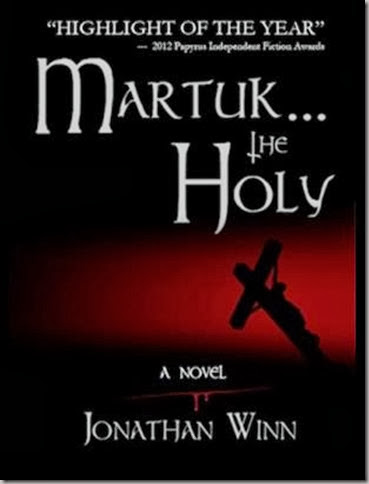 Martuk ... the Holy
Book One
Jonathan Winn
Genre: Horror, Literary Horror
ISBN: 978-1480035690
ASIN: B007HPQPV4
Number of pages: 446
Word Count: 89,000
Cover Artist: Timothy Burch
Amazon BN Smashwords
Book Description:
In a crowded Left Bank cafe, an immortal man sits, the phantoms crawling near, the heat of their whispers stinging his cheek ...
and Martuk ... The Holy begins.
One thousand years before the birth of Christ, a golden god damns Martuk with a kiss. In a land ruled by a wounded king, life everlasting steals his mortality from the bottom of a golden cup. Finally, generations later, a Messiah who has the power to heal breaks under the weight of Martuk's demons, stumbling to his death defeated by darkness.
From his home in modern Paris, he writes, his memories lush, his words evocative. Revisiting his impossible life, he vents his rage and shares his loneliness. From bloody battles with a demon he cannot escape to the ghost of a beauty who haunts him still, this is his story.
This is Martuk ... The Holy.

5 ebook copies of  Martuk ... the Holy by Jonathan Winn
a Rafflecopter giveaway


Posted by authorkarenswart at 11:00 AM