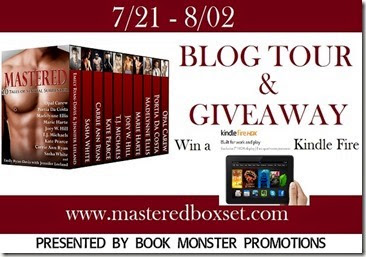 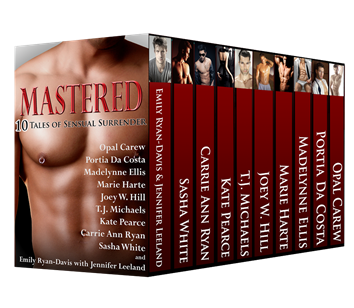 “I know what I like.”
“Let me guess. You want a man to tie you up, spank your arse and make you call him Sir.”
“There’s nothing wrong with any of those things in a consensual relationship.”
“I agree, but I don’t play those kind of games.”
“I’m not sure I believe you. You said—“
He held up his hand. “I said I liked giving my lovers what they wanted.”
“So if I asked you to tie me up and flog me, you’d be okay with that?”
His eyes were cold. “I don’t play games.”
I studied his calm face. “Then what do you do?”
“If you really want to know I suggest you have dinner with me.”
“You’re relentless.”

“A lot of people hate it when they achieve their dreams.”
“Not me.” I returned his stare. “Are you waiting for me to feel ashamed of myself or something?”
“I’d hate it if you did.”
“Good, because I’m not ashamed of a single thing.”
He clicked on the remote, and an image of me standing naked appeared on the screen.
“My ass looks big.” I commented.
“Your arse is fine. Why are women so critical of themselves? I don’t think a single man in that room was thinking that.”

Excerpt from Remastered by Madelynne Ellis

“I’ve been broken,” he replied, gently brushing stray threads of hair from her upturned face. “You might think I’m still broken given the sorts of things I like.”
“What kind of things?” She wished he’d be plainer spoken instead of so cryptic.
Spook moved his hand from her temple and instead splayed it across the front of her throat. Alle’s breath immediately hitched. She felt vulnerable with his palm covering her windpipe and his thumb and forefinger tucked against the ridge of her jaw, but at the same time, arousal bloomed inside of her, leaving her breasts feeling heavy and a mellow throb drumming between her thighs.
“Do you like pain, Alle? I do, I enjoy inflicting it. I like seeing women tied up. I like photographing their skin when it’s been reddened by numerous smacks.”
Dear God, had he really said that? Her mouth turned dry. It wasn’t what she’d expected. Hoped for, yes, but never anticipated.
“I like to wrap the strap from my guitar around their wrists and bind their hands behind their backs.”
She could picture him doing that to her, winding the long strap round and round, and then up between both hands. She’d be naked at the time, and on her knees, and oh so dreadfully aware of what came next.
“Do that to me,” she blurted.

An Excerpt from WORKING OUT, by Marie Harte

The knock came again.
“Hold on,” she called out and tossed off her blanket. She trudged to the floor in wool socks and peered through the peep hole. She froze. After a moment, she opened the door. “Yes?”
Mac Jameson stood in the communal hallway of the aging Victorian looking edible in jeans and a black leather jacket. In the hall lighting, his bright blue eyes glinted with some indefinable emotion.
“Here. These are for you.” He held out a bouquet of pink roses.
“Ah, what?”
The intensity on his face faded, and a smile took the place of his frown. “That is one ugly robe.”
“Hey!”
He stepped forward and would have trampled her if she hadn’t moved back. Before she knew it, he’d entered her apartment and closed and locked the door behind him.
“Nice trick.”
“It’s called being persuasive.” He put the flowers in her hand and closed her fingers over the smooth stems.
“You brought me flowers?” Mystified, she didn’t know what to think. Was this another part of his nonsexual dating technique?
“You want them or not?”
“Yes, yes.” She hugged them to her when he moved to take them back. Flowers. When was the last time a man had brought her roses? “Such an ungrateful gift giver. Thank you. I love them.”
She turned and left to rummage in the kitchen for a vase. After she’d arranged and watered them, she put them in the center of her dining table. “So pretty.” She glanced up to see Mac right in front of her. “Mac?”
“Yeah. So pretty,” he rumbled and tugged her to him using her belt.
Her robe parted just as he planted a warm, hungry kiss on her mouth. Maggie could only kiss him back, caught up in an inferno of unfulfilled desire. Everything inside her hungered for the magic of a man who didn’t hesitate to take what he wanted.
He broke the kiss and ran his mouth down her neck. “What are you wearing under this?”
“N-nothing.”
He tensed and pulled back. “Are you fucking kidding me?”
“I just took a shower.” She frowned, wondering what it took to break the man’s resolve.
“I am so screwed,” she thought she heard him mutter under his breath. In a louder voice, he said, “I came over to say hi. You’ve been avoiding me this week, and I wanted to make sure we were still good.”
“I was only keeping my distance from a crabby boss with control issues.”
“Yeah, about those issues… Thing is, I want to fuck you.”
“O-kay.” The man’s thoughts shifted like the wind. “And this makes you crabby because…?”
“Because what I want from you is a little different from what you’re probably used to. I want us to get to know each other better so you’ll feel okay about sleeping with me, my way.”
She caught her breath. “Spell it out. What exactly do you want me to do with you?”
“Everything I want, exactly the way I want it.” He tilted her chin up so that he could look straight into her eyes. “I want to play games with you. Ones where we need a safeword. Where you call me Sir and you obey me.” He kissed her again, and she felt her robe begin to open. Then his hands were inside, stroking her heated flesh. “I want to own your body in bed. Would you be willing to let me do that?”
“All this for some roses?” she replied while trying to make sense of her dreams suddenly meshing with reality.
He chuckled. “Nah. The roses were to show you I was thinking of you.” He cupped her breasts, and his eyes darkened. “But this is way more than I’d planned on asking for.” He fully parted her robe and stared down at her. Slowly, he bent his head and took a flushed, pert nipple in his mouth.
He sucked hard, and her knees buckled. She moaned and hung on to him for dear life.
Mac turned his attention to her other breast and teased and nipped until she teetered on an orgasm. She’d never been so sensitive before, but moisture coated the insides of her thighs.
“Yeah. This is what I want. You helpless in my arms.” He kissed her, his tongue penetrating while his hands moved down to cage her waist. “Maggie… fuck. I wanted to wait, but no more. I want you, but I’ll go easy with my demands.” He gripped her tight and kissed her again. “What do you think?”
She stared up at him when he pulled away. Her robe hung open, but he looked only at her eyes.
“I think… I think we should go back to my bedroom.” She tugged him with her, sure only that the time had come to finally have Mac Jameson. Tomorrow could take care of itself. Tonight belonged to her. 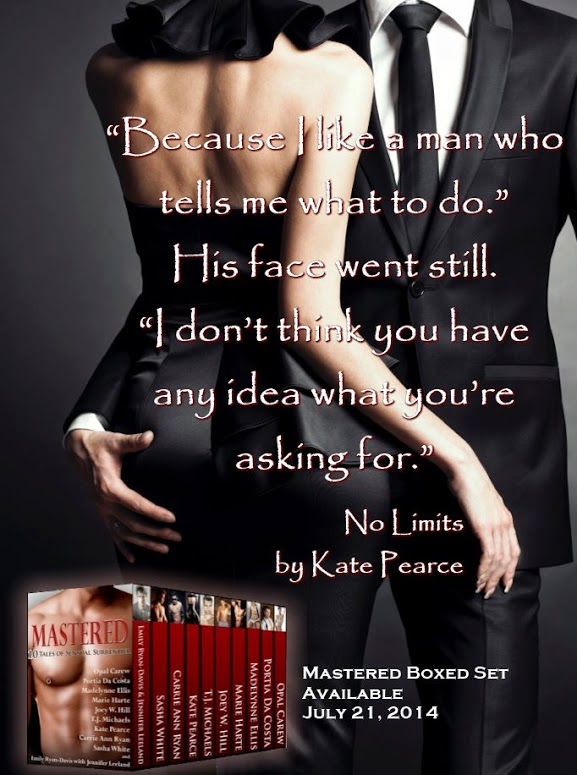