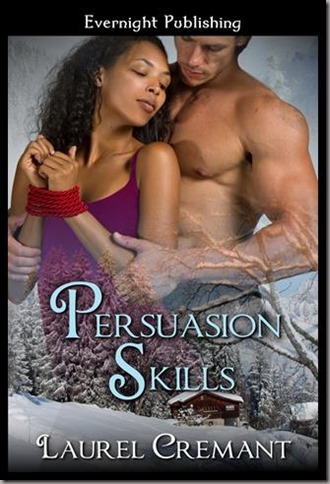 In the aftermath of a major health scare, Pepper Holts makes the relief-inspired decision to seize the day. Unfortunately, most of her “seizing” involves a bit of merlot and her best friend's pants! After a shared night of passion she realizes that her feelings for Jax are a lot more complicated than she ever thought.

Jax has finally realized that his allergy to marriage has nothing to do with the institution itself, and everything to do with the women in his bed—or more specifically, the one woman not in his bed. Her reaction to their one night together has him scrambling to regroup. So he does what he knows best—he disappears, and he thinks. The plan?—convince Pepper into staying with him at a secluded cabin for one week. One week of pretending to be a happily married couple to show her how great they could be together.

“Hell, Pep, I missed you,” he said before dragging her from her chair into his waiting lap.

He dipped his head to the crook of her neck and engulfed her into a tight hug.

There was nothing quite like a Jaxon Grey hug. He hugged with his whole body. His tall frame and broad shoulders always curved just right around her, immersing her in a mantle of warmth and shelter.

She dipped her head and rubbed her chin onto the top his head and closed her eyes.

His resulting rumble of laughter caused his chest to shift against hers, and just like that, her back stiffened in addition to a few other things along her body.

She bit back a groan as her nipples tightened against the lace of her bra.

The warm gust of his breath against her neck wasn’t helping matters either.

“You’re such a sweet talker,” he said. “And since I like you so much, I promise not to spank you for your bad behavior.”

He pulled her in tighter and began to rub the base of her back. His stroking hand was far from soothing as it settled low, and his fingers grazed the swell of her ass. All it did was remind her of how good his big hands had felt stroking her naked flesh.

She shifted uncomfortably on his knee, trying to scoot away from the heat of him.

“I’m sorry, but I left my Emily Post handbook at home.”

He lifted his face from the crook of her neck and drifted his hands lower. Holding on to her hips, he dragged her forward and caught her gaze with his.

“Really? That’s too bad. Chapter six is dedicated to the perfect way to drape yourself across a man’s lap. Feel like practicing?”

Both his suggestion and hooded gaze held her captive for a few silent seconds. The idea of his strong hands spanking her ass flushed her body with heat.

Laurel is a romance author, who like most writers loves to read. Her first love (pun intended) has always been romance. From the sappy YA romance novel to the more risqué erotica novels, Laurel is a sucker for a good love story.

Laurel writes paranormal and contemporary romance and is a self proclaimed, out of the closet nerd. She admits that she can't seem to avoid adding a bit of "nerdology" or "geek-dom" to all of her books. Living in Miami, she also admits that she can't seem to avoid giving her heroines gorgeous shoes, "In Miami, we worship everything strappy, open toed and just plain hot!"