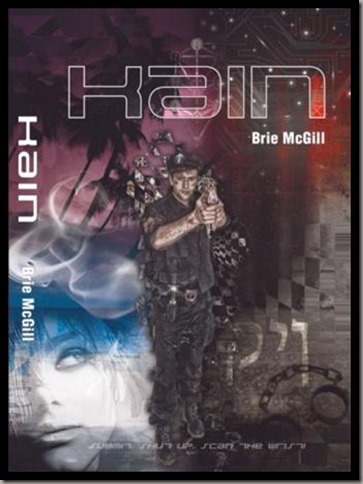 Counting days is irrelevant in the life of a well-to-do man, unless he counts the days passed in total service to the Empire. Salute. Submit. Shut up and scan the wrist. Therapists armed with batons and brass knuckles guide the derelict along a well-beaten path to Glory.
When human experiment Lukian Valentin escapes the Empire to save his crumbling sanity--through a grimescape of fissured highways, collapsing factories, putrescent sewers--he realizes the fight isn’t only for his life, it’s for his mind. Torturous flashbacks from a murky past spur him on a quest for freedom, while the Empire’s elite retrievers remain at his heels, determined to bring him home for repair.
Lukian needs one doctor to remove the implanted chips from his body, and another to serve him a tall glass of answers. Lukian attempts a psychedelic salvage of his partitioned mind, gleaning fragments of the painful truth about his identity.
A scorching, clothes-ripping rendezvous with a mysterious woman offers Lukian a glimpse of his humanity, and respite from his nightmarish past. It also provides the Empire the perfect weakness to exploit for his recapture.
To rise to the challenge of protecting his new life, his freedom of thought, and his one shot at love, Lukian must reach deep into his mind to find his true identity. To defeat the Empire, he requires the deadly power of his former self--a power that threatens to consume him.

Brigham loomed over the youth, and with a sharp gesture of the hand, spit the booming command: “Aadima.”

The youth stirred from his drug-induced catatonia. He rolled his head to one side, the silver wired crown tipping forward, and slowly sat upright, confined by the bonds of the chair. His eyes fluttered open, brown, wide, and blank, reflecting an awareness scrambled.

He squinted, struggling to draw Brigham into focus. A moment passed: he shook the fog out of his head, and his posture stiffened, recognizing the man in front of him. He pounded a fist against his chest in salute. “Commander Brigham, Sir!”

Brigham looked to the screen; he glanced at his watch, and turned to Skirra. “Thirty-seven seconds. Note it.”

Skirra fumbled with an electronic notepad, trembling and tapping in her notes.

Brigham knelt on one knee beside the examination chair, and waved an intricate series of hand gesticulations in the subject’s face. “Greetings, Kain.”

The man sat rigid in the chair, staring blankly ahead.

“Dvitiiya.” Brigham paired his command with a symphony of motor signals. “Disable.”

“Kain.” Brigham climbed to his feet, clutching the back of the chair. “Tritiiya.”

The subject remained frozen in his chair, eyes glossy and unblinking.

“Damn you!” Brigham grabbed a flat remote from his pocket, pointed it at the man in the chair and clicked.

The youth moaned, violent tremors wracking his body. He convulsed and flopped in the chair, the leather bonds subduing him, holding him in place.

Skirra brought her hands to her head, watching in horror as graphs spiked and numbers soared.

“There are no uses for faulty machinery!” Brigham towered over the shackled youth, indifferent to his pain. “None! You remember that.”

Skirra glanced at the clock, and chewed her nails.

The subject’s breathing slowed and he shifted his posture, sitting upright. He stared ahead, speaking in a monotone. “Tertiary Tritiiya functions loaded, Sir.”

“Kain.” Brigham waved his hand, and spoke in a thunderous voice. “Load Caturtha.”

“Identification confirmed: granting access to restricted Caturtha systems.” He mechanically rotated his head toward the floor, and spoke with eyes closed. “Proceed with instructions.”

Skirra slinked beside Brigham, and lifted a pair of clunky taupe goggles covered in a swarm of blinking lights. She leaned over the chair and rested the goggles on the bridge of the youth’s nose, and fitted the frames, one at a time, over his ears with a gentle touch.

“Kain, do you recognize the image of this man?” He drummed his fingers against the back of the chair.

“Target confirmed, Sir.” He stared in a daze at the lightshow provided by the goggles. “Requesting variables of mission duration, Sir.”

Brigham pealed his final command. “Caturtha functions will terminate when his Glorious duties are fulfilled.” 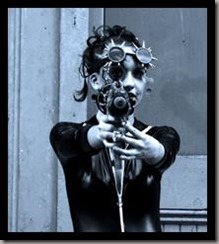 Doctors suspect Brie developed an overactive imagination during childhood to cope with the expansive corn maze known as rural Pennsylvania. Unable to afford an operation to have the stories surgically removed from her brain, she opted instead to write them down.

Brie lives in British Columbia with her boyfriend and naughty black cat, somewhere not too far from the sea. She enjoys trips to the local farm, chatting with her long-distance friends on a rotary phone, and roflstomping video games from the nineties.

Posted by authorkarenswart at 11:09 AM