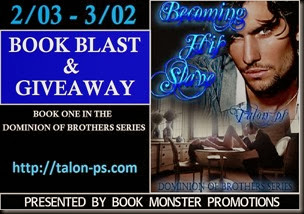 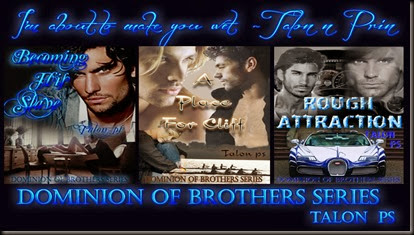 Dominion of Brothers Series
Written by Talon p.s. & Princess S.O.
Five Brothers at Arms share a lust for control and bondage; now they are living the BDSM lifestyle openly, and they are the very Masters who can provide satisfaction to the world of Taboo.
Plenty of people love their kink, but when the Dominion of Brothers come to New York, the Lifestyle gets a re-do with not only a boost in stimulation, their fellow Lifestylers also get a guardian. Now, the Brothers will stop at nothing to protect their friends, loved ones, and those who look to them for sexual freedom. 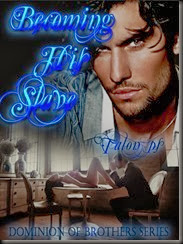 Katianna Dumas hovers on the edge of passion, caught up inside the exquisite eroticism she crafts as an author. Her erotic novels seduce readers with tales of new and unknown heights of pleasure to which Katianna herself, is inexperienced. That is until one night she couldn't even remember; she confessed a secret desire to Trenton Leos, who's now intent to bring her fantasy to life and lure her into his world of Dominance and Submission where he's not just any Dom, he's the Dominus. The Master of all Doms.
Life with the Dominus promises to surround her with rich, somatic passions, but therein too lies danger, and she's not sure she's strong enough to hang on. Especially when being with Him means submitting her life to Becoming His Slave.

SYNOPSIS:
Trenton Leos isn’t just another Master of Doms; he’s referred to as Dominus. The Master of them all. Known internationally for his skill with a cane and for serving up the most delectably trained slaves for the Masters who love to possess them. As Dominus, he has everything he could want out of life except one, his own personal slave. Waiting until he finds the one perfect unicorn for the ultimate surrender— their life to his dominant control.
When a friend introduces him to her newest star writer, he’s certain he’s found his Life Slave. But as he starts to obsess over the nervously petite woman, he soon realizes she can’t surrender a lifetime of control she does not possess. So he must make the first sacrifice— by letting her go.
Katianna Dumas, a writer of erotic romance is no stranger to the allure of eroticism and Trenton Leos is probably the sexiest lure she’s ever fantasized about. There’s just one problem, she doesn’t play his game.
For four years Katianna has known the Dominus as little more than the man who‘d given her the chance to stand on her own for once, as a friend he kept his distance. Close enough to tease the senses, but not enough to tease his bed, though she likes it when he looks her way.
After a mishap at Club Pain, Katianna finds herself in the protective custody of Trenton Leos for the night and everything changes for the two of them. Katianna can’t remember what secret desires she exposed, but now the Dominus is demanding to court her for the ultimate submission— to become his Slave for life.
Life with Trenton promises to surround her with rich, somatic passions, but it also comes with dangers and she’s not sure she’s strong enough to hang on, or bear to be let go if she fails to keep up with his desires that constantly overwhelm her.

We Came— We Saw— and then we made it sexy.
And that's pretty much how the Twins came to write Erotic Romances and Dark Fantasies. Both Talon PS and Princess SO have been writing together since they were kids, always challenging and competing with each other, and always each other's biggest supporters. After a life time of gathering experiences and honing their story telling skills, they have finally starting putting them to novel size tales. And so far have seen 8 titles published with three scheduled for next year releases so far, and still another 30 something projects in the works. So have those book moments ready, as Talon always says—
"I'm about to make you wet."  ~The Twins: Talon & Prin

Talon ps & Princess so: Not just Twin Authors, but your next Fantasy