Character Interview with Catheryn of Dream Knight by @DeniseLynn 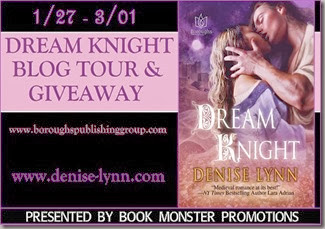 Today on the blog we have Catheryn of Brezden with us for an interview. Chatheryn is one of the main characters in Denise Lynn’s Dream Knight. We would like to thank them for stopping by today and sharing with us. Enough talk let's get on with it.

Eldest daughter of Baron Brezden, 2 younger sisters who I haven’t seen since they were sent away ages ago. 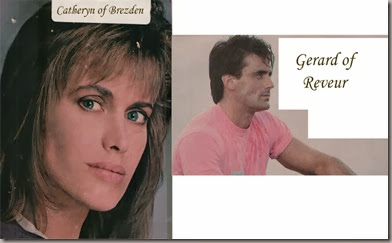 I’m 18 and yes, I know I’m beyond the reasonable age for marriage, but my father was killed before contracting a marriage for me and the guardian King Stephen appointed has other ideas than handing me and my fortune over to another. My worst quality? I tend to jump into the fire with both feet and worry about the burns too late. My best? Hmmm, I can run a keep.

That I’m really not stupid and that I do know what’s going on in my keep behind my back. On the other hand, if they knew that, it might make things more dangerous for me.

I harbor thoughts of murdering my guardian and his minion. Actually, I contemplate their bloody deaths nightly.

Lightning and dying before experiencing the marriage bed.

Barring Baron Pike’s and Raymond de Brye’s deaths? I’d like a husband and children. And a garden, I’d like a small plot where I can grow some herbs.

Fashion? LOL – here in Brezden keep? I own one good gown. The other two are...serviceable.

Not much really. I mean with this ceaseless war between Stephen and Matilda, being a rebel can get you killed—or tossed into a cell and forgotten.

I’ve managed to avoid de Brye’s clutches so far. That’s got to be an achievement of sorts.

A few stolen moments of peaceful silence would be near to heaven. A little time to worry about no one and nothing except myself would bring me great joy.

Anxious. I’ve been having these odd, terrifying dreams of late that I fear...or hope, I haven’t decided, may come true.

My mother’s ring. It’s all I have left of her.

The ability to keep hoping for the best.

Cruelty for the sake of pleasure.

That’s a tossup between the baron and his cohort.

That I was unable to save my mother’s life.

Shhh...don’t tell anyone, because it could get me in more trouble than I can handle, but it would be the Empress Matilda. Now there’s a woman who commands respect and knows what she’s wants.

My physical weakness. I wish I were strong enough to overpower my guardian and oust him from Brezden.

If you would like to find out more about Catheryn of Brezden and her world check out the book blast below.

Posted by authorkarenswart at 8:20 AM

Email ThisBlogThis!Share to TwitterShare to FacebookShare to Pinterest
Labels: Interview