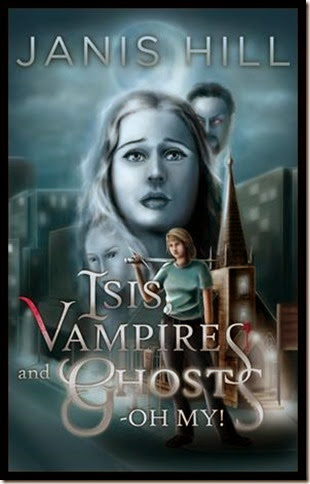 Isis, Vampires and Ghosts – Oh My!

Too late to save her sister’s life, Stephanie Anders must now try to save her soul from the vampire who has possessed her, Branwyre, eighteenth vampire Lord of the Aegean.

With only the aid of the ghost of a pissed-off Buddhist monk with a potty mouth and the modern day Priestess of Isis, Stephanie must take on demons and other denizens of a world she knows nothing about if she is to succeed in banishing Branwyre.

But even more difficult than that, she must learn how to forgive her sister Estella for what she did to her if she is to have even half a chance of saving her soul. Welcome to a world within our own – the Other World.

Estella had the grace and timing to wake up just after I’d hauled her dead weight, literally, into the chair and balanced it there long enough the grab the rope.

“By the Light of Isis, what do you think you’re doing?” Her tone was nearly petulant enough to be the old Estella asking me, not the new peace-and-love one.

“Following your High Priestess’ instructions.” I grunted while tying her hands behind her back as best I could, before continuing to wrap the rope around her and the chair.

“But why are you tying me to a chair now?” she asked, aghast to realise just how tight I had done it. “Branwyre can’t take over until night time. We’ve got at least another hour.”

Ignoring her question for a moment, I snatched her right foot and tied it to the corresponding chair leg. Then, ignoring the attempted kick, did the same to her left one.

“Roxanna clearly states in her instructions here to gather the required items, purify them and set it all up, you included.” I waved the note at her before continuing to wrap her legs, backside and chair in the rope. Yeah, I’d gotten a decent amount. Who says two for one sales are a waste of time? “Nowhere in her instructions does it say we should stop for coffee and a chat. When I’ve got as much of it ready as I can before moonrise, I can actually have a rest. You know, something even we non-undead need to do from time to time.”

She went to protest, I even paused to watch the show I felt she was about to perform, but other than gaping a few times like a stunned fish, she stayed quiet. Wow, this Light of Isis was amazing if it could prevent the Queen of Whinge from speaking.

“Fine then,” she finally managed, a slight sulky tone to her voice. “But how am I meant to eat dinner?”

I sighed; I hadn’t honestly thought of that, going along the lines that she was dead. Yes she was an animated corpse right now, but dead was dead. You shouldn’t have to provide meals for them.

“Nowhere in my instructions does it say I have to feed you.” I muttered. Then feeling I should relent a little as she’d found it within herself to be nicer. “But how about I order pizza, and you eat it cold later. Surely even the Light of Isis can’t have cured you of your cold pizza habits.”

She sighed, but said no more for a moment. Didn’t even pout, which surprised me even more than the silence.

“I do wish you’d be more respectful of Isis and her purifying Light,” is all she eventually said as I was adding a few more knots to the back of the chair.

“Uh-huh.” I was more interested in making sure I’d done a good job, than listen to a lecture on appropriate religious respect. Especially from someone who in the past hadn’t held any respect for anyone or anything.

“And no dinner is fine; I don’t seem to have the need to eat that often anymore.” She continued, trying to watch me over her shoulder. “I won’t have you dissing cold pizza though.”

“Sure!” I said, standing back and wiping sweat from my brow and then my hands on my dress. I remembered I was still in one of my best ‘sombre but not kinky’ little black dresses, not having had a chance to change. So Roxanna’s wodge of cash was buying me a few clothes tomorrow, too. Why not! If I wasn’t allowed to go home until this was all over, she owed me at least a pair of jeans and clean underwear. I checked the instructions again. Okay, so all items purified, sister roped tightly into chair. Salt time! Boy I hoped the motel’s maid service wouldn’t be too pissed at me, or at least wouldn’t notice until after we’d left.

Character Bio: Early thirties, divorced former accountant who’s about to take on a new career path not even she saw coming.

I don’t suffer fools lightly, but I am dedicated to my family. Some days, however, it’s hard to tell which one of those is my best quality and which is my worst.

I am not am morning person. Too many people are just so bright and perky in the morning. I don’t need that, just give me time to wake up and interact nicely if you want me to be polite.

I want to believe… but being the big sister, it’s my job to stay firmly in reality.

Forgetting and being forgotten. We have been put on this earth to make a difference and be remembered for it. And we also must remember those who have made us what we are.

Right now? A bear claw and a huuuuuge mug of coffee. Not a morning person.

Well and truly single. I don’t have time for romance right now as there is a whole new world and life opening up before me. I need some ‘me time’ to take it all in. A boyfriend would just get in the road and mess things up more than they need to be.

I feel fashion sense is an oxymoron. You’re either fashionable or your sensible in what you wear. Me, I like a good pair of pants you can run in without chaffing, a blouse you can get the stains out of easily, some sturdy shoes that are not just good for running, but have good traction for those slippery situations… and gloves. Elbow length leather gloves have become essential in my new life.

But if I could get away with it more – tracky dacks and an oversized t-shirt. Enough said.

I really don’t know if I am a rebel. I just do what is right and try and do so in such a way that those who walk in the Light aren’t angry at me, and those who dwell in the Darkness don’t think I’m their new BFF. Yes I sometimes walk close to the line that separates the two, but I’ve not crossed it yet. And look, if they started it, it’s not my fault if things get a little fractured.

That I am what I am and have survived many nasty hurdles to get there.  Just being myself and getting through life in one piece, what more could you ask for?

Is a constant state of flux a state of mind? There is just so much happening in my life right now that I need to take in that it’s like a whirlpool in there.

I have a memory box that contains items from my past that help me remember good times and the way life should have been before it was bitch slapped into what it actually is.

Someone told you I was sarcastic didn’t they? And this is just your subtle way of asking me about it. Come on, give a girl a break. So what if I am just a touch sarcastic. I’m harming no one that much. Except those who don’t get sarcasm… they’re basically screwed.

Vampires. I’ve not known about them very long but it doesn’t take a lot to dislike the nasty little sods. Especially when they’re possessing you’re dead sister.

Living? That’s a tough one as most of the people who really annoy me are undead or otherwise.  If I had to narrow it down to someone still alive, then Simon Welsh. The sc… delightful soul who helped destroy my marriage.

I’m going to have to skip this one as I don’t want to go down that Dark path. It’s not pretty… all that weeping and tears and stuff.

That he is alive, not a demon and walks in the Light.

She doesn’t out sarcastic me in a conversation.

Who has time for fiction? Have you seen the Other World I’ve found myself in? It brings fiction a little too close to fact.

Roxanna, the High Priestess of Isis. I love the way she can be catty while still appearing to be an all-round good sort.

My hair. I hate my hair. No matter what I do I do to it, it’s just a mess. One day I am going to give up on it all and just shave if off I think.

Don’t poke the bear. I used to have this on a nightie… seriously not a morning person. 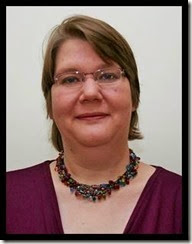 Janis grew up in and around Darwin, Australia, and its rural surrounds. As a child, she spent a lot of time around 'science geeks' at the Darwin University, where her father was a lecturer for many years. It took her a long time to realise that not everyone got to grow up like that or could relate to all the Science Labs scenes in the old Dr Who.

Janis now lives in the Adelaide Hills with her husband and 3 children, lovingly referred to as the ‘Demonic Hordes’. She is a semi-retired ICT Support Officer who, when not writing, takes pride in her work as a Haus Frau while dabbling in the art of translating century old cookery books into modern recipes to experiment on her family with.