Book Blast & Giveaway: Tim on Broadway: Season One by @rbettenc 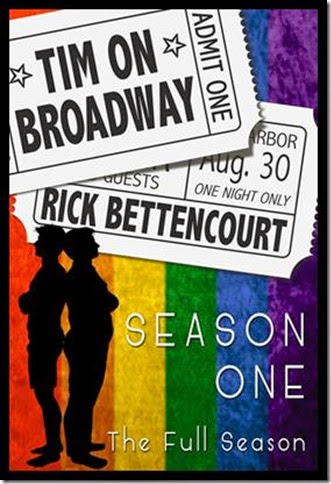 Tim on Broadway: Season One

Carolyn Sohier, the Greta Garbo of divas, is giving a once in a lifetime concert that Tim can’t afford to attend. Tim—an overweight, twenty-something virgin—regrets lending the hunky bag boy at the grocery store money that could have bought him a ticket. Tim needs to call in his debts, but money isn’t the only thing holding him back.

The first time Tim met Javier, he was blown away by the attention. He didn't often—actually ever—get a guy, let alone a hot one, pay attention to him. The problem, Javier is straight; yet he gives Tim mixed messages. Tim can’t get Javier off his mind, unless he is pursuing his love for theater—or talking with his best friend, Julia, about the “unattainable” crushes they share on some of the guys back home.

With the Carolyn Sohier concert fasting approaching, Tim struggles to get tickets. If he hadn't lent Javier the money to, well, have his way with him in the beer cooler at the store they worked at together, maybe Tim wouldn't have lost his job, and would be able to see Carolyn perform. But Tim’s learned his lesson from all this…or so he thinks.

I put down my doughnut, picked up my iced coffee and took a sip. The extra-extra cream and extra-extra sugar gave me a nice little rush. It wasn’t quite as good as Starbucks’ but being unemployed I had to make the best of my homebrewed pot.

I had my cell phone cradled in the crook of my shoulder, talking to my best friend Julia. “With my Kindle,” I said, “I can read them without people staring at me on the subway.”

“I still can’t believe you like girly romance books,” Julia said. I could hear her slurping her own coffee, probably an iced Double Mocha Grande, being that she was at our old Starbucks in Salem. “You’re the only guy I know who has every Chippendale Publishing book ever released.”

I didn’t really but I didn’t want to quibble over details. “Oh my God,” I said, as a bit of powdered sugar sprayed from my mouth and landed on the blanket I had covered over me. I was getting ready to watch TV. “I almost forgot to tell you.”

She slurped some more of her coffee. “What?”

“Guess who’s doing a comeback concert?” I brushed the sugar dust off the blanket.

“I don’t know. You got me,” she said, and from her muffled speech, I could tell she was eating, probably a slice of carrot cake or a blueberry scone. I know what Julia likes. When she eats desserts, she usually goes for something that has a vegetable in it or some antioxidant fruit, because, of course, they’re healthier than my powdered doughnuts.

I pulled the blanket closer to me. “Carolyn Sohier,” I said. “She’s finally coming out of seclusion and doing a concert.”

“Carolyn, who?” I heard the clinking of the fork against the plate. Carrot cake, I bet.

“Carolyn Sohier― you know, the singer who was in Witches of Salem, that movie we saw the night I slipped on the ice in Danvers? And she was also on Broadway in―”

“Oh, her. That movie was terrible.” I could practically hear her nose wrinkle in disgust. Julia was brutally honest.Well, I liked it,” I said. “She’s an amazing singer.”

“She didn’t even sing in that movie,” she said, with her voice trailing off at the end.

“Well, it wasn’t a musical. But she did sing the theme song. Remember, we saw her on last year’s America’s Got Divas. She was the guest judge.”

“I suppose you’ll want me to go with you,” she said.

I clicked the remote control. “We’ll see. Tickets are expensive. She’s decided to come out of seclusion, out from her Greta Garbo cocoon. It’s a one-night only performance up in Bar Harbor.”

“Maine? Who the fuck gives a comeback performance in Maine? Bar Harbor, nonetheless. What, is she going to come out on stage riding a moose?” She laughed.

My neck was beginning to ache. I rubbed it. “I guess that’s where she lives. It’s a benefit of sorts.”

“So are you going to take the train or bus your ass up here to see her?”

By here Julia was referring to New England, where we had both grown up.

“You mean will I go?” Julia wasn’t a huge fan of divas like I was, but she knew I had no one else to go with and wouldn’t travel alone.

“C’mon, you like her,” I said. “You even said her rendition of that Barry Manilow song was better than his.”

“Is that the song she sang when she shit herself on stage?”

“Whatever,” I said and tossed the remote onto the seat cushion next to me. Julia was referring, of course, to Carolyn’s fairly well-publicized stage fright. Carolyn had suffered a particularly bad spell several years back and, well, embarrassed herself on live television. It was pretty sad. Julia thought it was funny.

I turned as an ambulance’s siren rang out from the street below, followed by a blare from its horn. I hated the sound of ambulances. I got up to shut the window as it took a turn down Charleston Place.

“Five floors up and it sounds like the cops are right next door,” she said. “I don’t know how you can stand living in New York City.”

“It was an ambulance and I’m in Brooklyn.”

I looked at the wall clock, a gift I bought myself. It had logos from nearly all the big Broadway shows over the past two years. “Shit. It’s almost time for America’s Got Divas and I haven’t even set the DVR.”

“Alright, I’ll let you go. Besides, I should check the dryer.” She was at our old Starbucks across from the Laundromat. “Oh and how are you going to come up with the money to buy tickets for this reclusive diva? Didn’t you just get done telling me you’ve already spent this week’s and next week’s unemployment check?”

I didn’t want to get into it. “Javier,” I said. “This week, he’s finally going to pay me the money he owes me.”

“Oh, God. Not Javier.” I knew her well enough to know that she was probably rolling her eyes as she said it.

“Shut up,” I said, with no real force behind it. Julia could be such a bitch. She was always reminding me of the things I did wrong, which were plenty, and the things I should be doing to better myself, which, quite honestly, were spilling out of my inbox.

I didn’t want to be reminded of the humiliating experience I had had with Javier, the bagger at the Good Barn, my former place of employment. In short, he got me fired. “He’s getting money from his student loan,” I said. “He is going to pay me back on Wednesday.”

“We’ll see about that. Didn’t I tell you not to give him that money? Didn’t I tell you you’d probably never see it again? But no,” she said, holding onto the vowel a bit longer than necessary. “You still went off and gave it to him after giving him a BJ in the beer cooler behind Produce. He’s going to ruin your wholesome, good-natured reputation.” 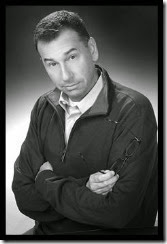 Rick Bettencourt is the author of Tim on Broadway, Painting with Wine and Not Sure Boys. He lives with his husband and their little dog, Bandit, in the Sarasota area of Florida. Rick originally hails from Boston’s North Shore where he learned to speak without pronouncing the letter “r”— and say things like “tonic” when he wanted a Coke, or “bubbler” when getting a drink from the park’s water fountain.

A few years ago, Rick was adopted by a Cairn Terrier named Bandit. Recently, Bandit moved Rick, and his husband of several years, to Florida to escape the New England winters and avoid being engulfed by snow drifts when going about their business.

When Rick is not being walked around the block by Bandit, he might be found working on a story about an underdog character triumphing over adversity. Or you might catch Rick watching The Walking Dead or Once Upon a Time, reading something like Running with Scissors or some personal development book, or writing to a group of folks on his mailing list.

In addition, Rick enjoys theater, art, old postcards, and amusement parks. He also loves to hear from his readers.