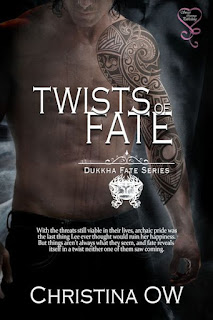 Twists of Fate by Christina OW

Book Blurb:
Life had been great these past few weeks. I have a hot boyfriend, got back my dad and my adopted sisters were happy with their significant others. Life was good. That is until I started getting attacked by bouts of pain that would render me unconscious. Something was wrong with me, Ash knew but he wasn’t sharing. Worse than that, Steve in the worst form possible is back to haunt me. And Ash with his hug archaic pride just won’t let it go. Oh, but I haven’t gotten to the worst part yet…hell!
What’s a girl to do to get some long term happiness?
Dukkha Fate Series
- Sweet Romance.
-Sweet Romance
-Interracial, Multicultural, New Adult, Paranormal, Werewolf.
-Hero is Native American, heroine is African American with East African origins.

When a man with an ancient grudge meets and falls in love with the innocent girl who's life was ruined by his vendetta, complicated isn't word enough to describe the situation he finds himself in. His chance with her would be shot to hell if she were to find out his role in her family's death. She would probably take the news that he was 325 year old werewolf much better.

Get the series preview The Beginning FREE https://christinaow.wordpress.com/fate-series/the-begining/

Christina OW writes suspense, thrillers, erotica, interracial and multicultural romance books. She is the author of Contemporary, Fantasy, Paranormal Romance books and a poet of currently 3 titles. She loves reading novels that take her on a ride of wild emotions. Books have always been an escape for her, for a few hours she gets to live the lives of characters she grows to cherish and admire. She's always had an active imagination and because of it has lived in her head more than she has been in the outside world. She always imagined scenarios and wondered how they would turn out in the end, and what kind of emotions they would invoke. Thus began her writing career.

1.      What genre(s) do you write? Romance in contemporary, paranormal and fantasy. My characters are IR/MC couples.

2.      What was the hardest part of writing your book? The writing. There is this meme about having voices in your head. For authors we need those voices, those characters, in writing the book because when they go silent, I end up staring at a blank page for hours even days. It’s not fun at all especially when there deadline is looming in the horizon.

3.      Are you a plotter or a pantser? Both. Before I begin a book, I plot it out. How I would like it to begin, the climax, the conflict and finally the ending. But sometimes the book takes a life of it’s on and the only thing that stuck to the plan was the beginning.

5.      How much time did it take from writing your first book to having it published? The first book I ever wrote just got published in January- Fate Reborn. So I would say from the first word written to publication, four and a half years.

6.      What other careers have you had? I have a BA in International Studies and Communications & Media, and a Diploma in Law. I worked at a law firm, and a fashion house while studying. But at the moment, I’m a writer and a fashion designer. This is where the ‘We make plans and God laughs’ joke comes in.

7.      What else would you like readers to know about you or your work? My books are just different social circumstances and how I think I would react to them. For example, a cheating boyfriend? Would I just burst up his stuff or other things on his body his emotionally attached to?

8.      What is your favorite vacation spot? Mombasa, Kenya. It’s beautiful, it’s hot and has the best night life during the holidays. It’s also home, nothing beats that.

9.      Which food could you not live without? Chocolate. I would wither away without chocolate.

10.  If you could travel anywhere in the world where would you travel? Italy. There is just something about Italy that has me drooling over it.

11.  Do you have siblings? What was it like growing up with them? Yes, a twin, and an older sister. Growing up, let’s just say, it was complicated. No one likes to share but people seem to think just because you’re a twin, it’s a given.

12.  Do you have a favorite snacks that you drink when you write? Orange juice, chutney chips and chocolate chip cookies