Cover Reveal: What If by @shirleyawriter 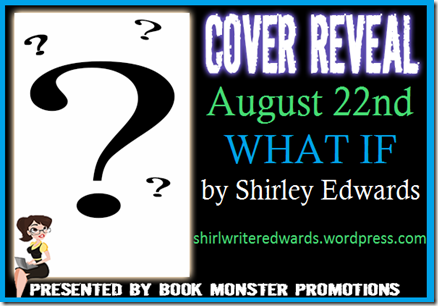 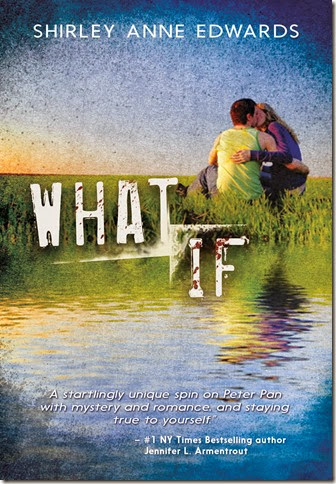 BOOK TITLE: What If

"A startling unique spin on Peter Pan with mystery and romance, and staying true to yourself." - # 1 NY Times Bestselling author Jennifer L. Armentrout

Sixteen-year-old Wendy Wyman is bereft over the death of her best friend, Peter Preiss, whose body has been found at the bottom of the town lake. She blames herself because she allowed him to go back to his family’s lakeside boathouse late at night where they had just made love for the first time. She wonders what she could have done differently to stop Pete from being killed, and thinks back to the beginning of the school year when her whole life changed forever.

Wendy will stop at nothing until she finds out the person responsible for killing Peter, who was bullied by most of the students in their junior class. She is in for even more of a shock when she finds out that not only did Pete keep dark secrets from her, but a few of her close friends are hiding ones as well. This also includes Dylan Mayone, the new popular boy at school, who wants her for his own, and may have had a hand in Pete’s death.

“Move your ass, Wonder Woman,” Pete shouted, flying by me on his cherry-red bicycle.

“You’re a dead man, Preiss,” I yelled, wiping the sweat off my forehead as I huffed up one of the biggest hills in Brookview Park. Just another hot and sticky Monday—Labor Day to be exact—as we enjoyed the last few days of freedom before we began our junior year of high school. We’d biked at Brookview forever and did every free chance available. Soon, we’d only be able to bike together on the weekends because of school and Pete’s part-time job.

He shot down the hill with his arms spread open like he was on a roller coaster. It frightened me. I didn’t want him breaking his leg like he did when he was twelve.

“Be careful, Mr. Daredevil.” I took my time coming down. There was no way my leg would be bound in a cast during my first semester of junior year, with me limping down the hallways open for anyone to tease or try trip me.

He spun his bike and kicked his legs in the air. He could be such a show-off sometimes. He bowed, walking my bike over instead of riding it, and I rolled my eyes. He would be crushed if he knew my true feelings.

Biking wasn’t really my thing. My idea of fun was reading magazines and watching television.

Such a teeny, itsy, bitsy lie.

I hit him hard on the shoulder. “You’re going to get yourself killed.”

“Hey, that hurt.” He winced, rubbing his arm.

“You know how much I hate that nickname.”

I moved my sweat-drenched hair away from my forehead. I could feel a zit forming, rising under the skin. Great. Knowing my luck, I’d have a huge tumor right smack in the middle of my forehead for the first day of school.

“You call me Wonder Woman. I call you Pee Pee. Deal with it,” I teased.

He took off his sunglasses and wiped them off with the bottom of his damp white T-shirt. He sweated more than any person I knew.

“Wendy, I can’t help it that your first and last name begins with the letter W. Think of Wonder Woman as a compliment. My nickname, on the other hand, is humiliating.”

He frowned, turning away from me. It was bad enough the jerks at our school made fun of him. Among the more derogatory names used were “Pity Pete” or “Patchy” because of the bad case of acne he suffered from. Most times he looked like he had a constant case of sunburn. His face was a curse. I could hear the sing-song phrase in my head, “It’s such a pity Petey Pee-Pee is a monkey”.

“Sorry,” I grumbled. He’d been calling me Wonder Woman for as long as I could remember.

“It sure is hot out here.” He lifted his shirt, wiping his face with it. I was about to tell him how gross that was, but then I noticed his stomach. Wow. His abs weren't all that bad.

“You’ve been working out?” I patted his stomach, hiding a grimace as his sweat moistened my palm. Before I could wipe it away, he grabbed my arm and twisted me around until he held me in a head lock. We grappled like that until I almost slipped out of his grip, but he was just too strong.

“Never!” I decided to do something very low. I tickled him.

He released me, and I raised my arms in victory. Leaning against his bike, he rolled his eyes.

“Seriously, you have some major guns there.” I stretched my arms above my head.

“And your boobs are so big, now they can crush soda cans. What are you now, a triple D cup?”

Only he could get away with saying something like that.

“Yeah, thanks for noticing. No push up bra needed here.” I pushed my chest out for emphasis.

Suddenly, a silver convertible drove by with two guys.

“Hey, Patchy, where’s your bananas?” the driver shouted and roared down the street with his radio blasting some air-splitting rock song.

I clenched my fists, wishing they would crash into a tree. “Pete—”

He fiddled with the handle bars of his bike. “I’m pretty wiped out. I should head home and shower before dinner.”

I glimpsed my watch, surprised by the time. “Okay.”

He strode away with his bike. I came up beside him, bumping my shoulder into his. He did the same to me.

“Ignore that jerk. He’s jealous you’re with a big boobed girl and he isn’t.”

He gave me a small smile but didn’t say anything. We walked in silence until we reached my house.

He leaned over to give me hug but ruffled my hair instead.

He jumped on his bike and drove straight inside his garage, chuckling all the way. I felt too winded to chase after him.

I’d get him back. I always made sure I got the last laugh. 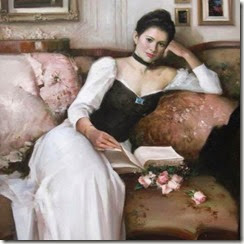 I’m a Northeast girl who first found my love for books when I read Nancy Drew’s The Secret of the Old Clock Tower at thirteen. I’m a bit quirky and silly at times, and love anything in entertainment from movies to television and books. I read close to 20 books a month and spend most of the rest writing.

Join me as I start my journey as a young adult writer.

In the immortal words of Mark Twain: “Life is short, Break the Rules. Forgive quickly, Kiss SLOWLY. Love truly. Laugh uncontrollably and never regret ANYTHING That makes you smile.”