Book Blitz: The Chronicles of Darkness by Matthew Head 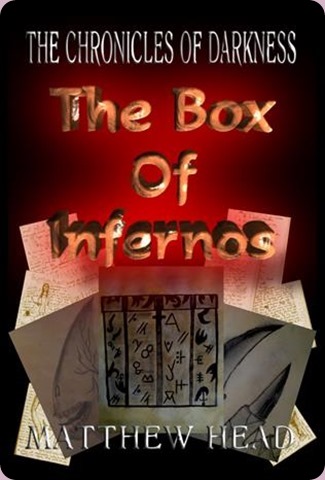 The Chronicles of Darkness: The Box of Infernos

The Chronicles of Darkness Book One

In the south of England, in the city of Monks-Lantern, events are starting to unfold which have the potential to threaten all of creation. Isaac Jacobs is a young university student with a haunted past who has long been fighting the supernatural monsters of this world and now he fights them alongside his four friends; Gabbi Gurtpasha, Billie Stamford, Laura Henley and Ben Pokeley.

What starts off as a disturbing but relatively low key investigation soon explodes into something much larger, darker and more fearsome than any of them could have imagined. Just what is behind the slow but steady disappearance of people from the city? Who is the much feared Imperator? What is the worst thing you can hope to see beneath a door in an empty building? How do you define a good man from a bad one? And what terror lies within the Box of Infernos?

A plan which has been in motion for millenia is now coming to fruition and Isaac had better be ready as his life will never be the same again from now on.

The figure stood there, arms outstretched as though it were ready to catch Isaac and Laura should they try and run. “Behold, humans!” the figure cackled in a surprisingly unimpressive voice. “I am Krahn, a beast from beyond your nightmares! A monster from the darkest, foulest -”

KLONG! Isaac brought the flat of the spade down on the demon’s head.

“Ow!” The demon yelped, staggering back and clutching his disfigured temple with stubby paw-like hands. “What did you do that for?!”

Isaac exchanged a dubious look with Laura. A demon playing the victim? This was new.

Krahn pointed angrily at them with one hand whilst keeping the other on his injury. “This has got hate crime written all over it!”

Krahn nodded and bared his pointy little teeth at them. “You heard me! Bloody humans – you think you can just barge in here and start whacking me with a dirty great spade just because I’m a demon. These wrinkles offend you do they?” he asked angrily, rubbing his cheeks furiously and pulling at the deep set wrinkles in his skin.

Isaac jabbed his spade threateningly in Krahn’s direction. “Yeah! And we didn’t barge anywhere. Our entrance was very sneaky and unassuming.”

Krahn raised a wrinkly eyebrow. “If you say so. And so what if I have been eating people’s fingers?”

Isaac couldn’t believe he was even arguing this. “It’s wrong.”

Krahn cocked his head to one side. “Why?”

“Because isn’t an answer. In the wild animals eat each other all the time. I don’t even eat the whole person, just a few fingers.” Krahn said plainly. “Just because you’re a human you think you’re above the food chain? I suppose you’d have me starve!”

“Oh for crap’s sake this is ridiculous!” Isaac shouted. “I’m not standing here arguing morality with a, with a -”

“Go on, say it!” Krahn goaded viciously. “With a demon? I knew it, a demophobe through and through. Too good to talk or have a debate with me are you Mr High and Mighty? Would you like to just hit me with your big spade again?”

Laura interrupted. “Just out of interest,” she asked, keeping a firm grip on her spade, “why just the fingers?”

“If you must know I like the crunchiness.” Krahn explained matter-of-factly. “And the nice little bit of meat on the underside – beautifully tender. Especially on students, all that writing they do really softens up the -” He caught himself mid-sentence. “Wait why am I explaining all this to you?”

Isaac and Laura looked at each other and shrugged.

Krahn pointed at them again. “Back off and leave me alone!”

Isaac raised a finger of his own in warning. “Only if you promise not to eat any more fingers. Go to the butchers, buy a pork knuckle or something.”

Krahn stared at them for a long moment with his dark, glistening eyes. “Do you know, talking to the two of you has had quite an effect on me.” He sounded quite remorseful now, his tone was suddenly humble – stripped of its irritating fieriness. “Listening to you speak, listening to your words – it’s made me realise I am something which I honestly didn’t think I was before you came in here.”

Isaac wondered if they had actually just performed a miracle and made a demon realise it was in the wrong. He looked at Laura – she looked baffled. They both looked at Krahn and gave him small, uneasy smiles.

Then the demon’s regretful expression turned to one of sudden malice. “I’m hungry!” 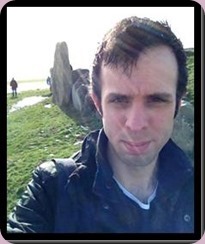 My name is Matthew Head and I'm a writer from Surrey. Well, I say from Surrey - I was born in Kent, moved to London for a bit and then moved out to Surrey to live with my partner Andrew. I was born in the eighties, raised in the nineties and then I was inspired in the noughties during my time at university where I studied Theology.

Theology is quite possibly the most fascinating subject in the world. Sounds boring I know, sounds like church and everyone knows that church is boring. But it's not like that at all. It's packed full of myths and monsters, gods and goddesses - mad, bad, sad ones alive in stories which rival many blockbuster movies in terms of how epic they are. It doesn't matter whether it's all real or not - it's the story that counts. Stories are beautiful because absolutely anything is possible within them. That's why I love writing because I love the idea of contributing to that and creating stories. Stories that will make you cry, make you laugh, make you scared. Because I think there is some magic in writing - that simple words have the power to make us feel and react so strongly to them.

When I'm not writing or doing my day job then I really enjoy going out and exploring new places. I love going somewhere I've never been before, especially if there's some history linked to the place. Old places are the best - the older the better. You just get this sense that so much has happened there, so many different people have come and gone and yet the place remains.

A few more random facts about me - my favourite pet is the humble goldfish, my favourite dinner is macaroni cheese, I love banana flavoured things but I strongly dislike bananas and the only real phobia I have is a phobia of frogs. Yeuch.