Today on the blog we have Lydia Dunham from Her Wicked Sin by author Sarah Ballance. Sit back and let’s get cracking.

Character Bio: Lydia is a young Puritan midwife and acting physician in Salem, MA 1692. In an effort to leave behind a troubled, tragic past, she pretends she is married and her husband is away in travels…until the night she meets a handsome stranger and her world is upended. Faced with accusations of witchcraft and a conviction that could end her life, Lydia struggles firsthand with the horrors and events of what became known as the Salem witch trials. 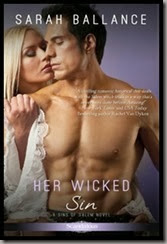 I have found myself to be a bit naïve. I never imagined lies—accusations that I was a witch—could be taken as truth, especially not with such dire consequences. I think belief in others can be a wonderful quality, but I believed a little too much and nearly died for it. I still maintain my trusting nature, though I am now a bit more wary of contentious neighbors!

After my arrest, I was forced from Salem with no chance to reunite with my neighbors. I would like them to know of my innocence and well-being, though I cannot risk returning to do so.

No one but my husband knows of the lie I perpetuated for so long—that I was not, in fact, married, but a widow. But I regret not the mistruth, for it brought me the man with whom I am now joined.

My greatest fear has been that of having my past exposed. Though I acted in my own defense, there are many who would judge me nonetheless.

Aside the health and happiness of my loved ones, I want nothing more than to see an end to the accusations that have brought ruin to so many of my friends and neighbors.

Henry and I remained married and are expecting our first child.

During my time in Salem I dressed the same as the other Puritan goodwives: in modest, faded clothing kept clean and in good repair, hoping to blend in. Even though I am now removed from the community and my husband is of great wealth, I still prefer simple dress over extravagance.

Secretly, I have rebelled quite a bit against what is expected of a woman. I refused to accept harsh treatment by a man—even though it was my duty to concede to him—and fought for my life and my freedom. But in doing so, I quietly worked to fit in—to avoid attention at all costs. In a strange way, it was part of my rebellion to do so.

For now, breaking free of my past. But with the upcoming birth of my child, I cannot imagine a greater feat than to bear life.

To be free from great worry. For so long I carried the burden of my past sins, only to have that replaced by accusations of witchcraft. Now, with those times past, I find contentment to be one of life’s greatest joys.

Though he is no possession, I simply adore Henry’s magnificent black stallion, Willard. He is a bit of a rogue, but a stunning, gracious beast all the same.

Henry is relentlessly enthralled by my eyes, which are a most ordinary shade of blue. I know not what he sees, but his attention is quite profound and enchanting.

Though certainly it is of no great issue, I must say the powdered wigs worn by the wealthier colonists are absolutely dreadful!

My one-time friend Rebecca Mather, who first accused me of being a witch and thereafter ensured everyone in Salem thought the same. She is by this time responsible for many accusations and hangings. Things continue to grow worse, though she cares not. She is a ghastly woman.

The loss of my babe, who was stillborn.

A gentle nature. After suffering at the hands of a man who cared only for his ability to punish, I most admire someone who uses not his physical strength, but his heart.

Certainly my husband. He took a great stand for my honor, and he did so not for propriety but out of love.

A year ago I would have changed so much, but now I would not change a thing. Every decision brought on by my character led me to where I am today, though if I could bring back my family and my lost babe to enjoy this life alongside, I cannot imagine a greater joy.

Remember to check out today’s spotlight to find out more about Lydia and her world.