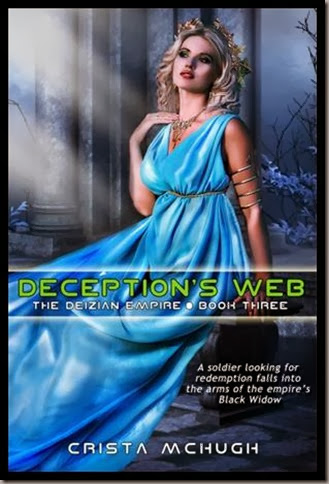 A soldier looking for redemption falls into the arms of the empire’s Black Widow...
Galerius, former Captain of the Legion, is honored to be given a chance to redeem himself by discovering who is behind the failing barrier. A series of anonymous letters all point to Hostilius, governor of Lucrilia, but Galerius thinks he’ll learn more about the plot by seducing the governor’s thrice widowed daughter, Claudia. Although he warns himself not to fall into snare of the empire’s most deadly temptress, one kiss leaves him begging for more.
Claudia has spent years as a pawn in her father’s political games and longs to break free of his rule, even it means betraying him to the emperor. When Galerius arrives in Tivola, she’s not sure if he’s there to aid her father or stop him. She willingly submits to his seduction, despite their class differences, in order to find the truth. What she doesn’t expect to find is a man who indulges her secret fantasies, satisfying her in a way none of her previous husbands did, and treats her as something more than a conquest. As time runs out to thwart her father’s plans, she must decide if she can trust Galerius not only with her life, but her heart.

He knelt before her. “Good morning, Empress Azurha.”

“Good morning to you, too, Galerius. I trust Varro was able to assist you adequately yesterday.”

He smoothed his hands over the clean tunic and nodded. “It was much appreciated.”

“Please come closer so I can share with you what we know.”

His gut told him this was not a trap. He stood and approached the table, feeling less cautious than he had before.

“What do you make of these?” she asked as she opened the chest.

He estimated that there were about twenty letters inside, each written on the same fine paper. He picked one up and studied the carefully written block letters that spelled out his name on the front. “Whoever wrote these has access to someone with money. A common man would’ve used coarser paper.”

She nodded, and he continued his assessment, sniffing the paper. The slight hint of incense clung to it, much lighter than the heavy scent that followed priests and priestesses. “It came from a household, not a temple.”

“Good. Now tell me what you think of the contents.”

He’d been dreading this moment from the second he’d heard the dispatches were addressed to him. He glanced at the broken wax seal, noting that it did not bear any insignia, before reading the few cryptic lines inside. “Have you been monitoring the shipments of ore from Gracchero?” he asked.

She nodded again. “Marcus was able to intercept two of the shipments that were trying to bypass the customs officials by coming in late at night. And these were sizable shipments—several tons, by our estimation.”

“But who would need so much ore? It only takes a mere coating to act as a conduit.”

“Read on,” she replied before taking a sip from her goblet.

Each dispatch contained a subtle hint, a clue that something was a potential threat to the empire. As the letters continued, the writer acknowledged the emperor’s intervention, showing he was aware of plots being foiled, and yet he did not know that the one person he was writing to was no longer the Captain of the Legion. He frowned. “Something doesn’t add up.”

“Whoever wrote these letters is close enough to the plotters to gain access to this information, but is not high enough in rank to know of my resignation. And yet the paper suggests the writer has access to money, and the writing reveals the person is well educated—no spelling mistakes or sloppy penmanship.”

Azurha raised a brow, the corner of her mouth rising in a half-smile. “Based on this information, who do you think might have written it?”

“A scribe, possibly. Maybe a high-ranking servant in a Deizian household.”

She nodded again, keeping her face blank. If she wanted to play philosopher to a student, she was doing an admirable job. Thankfully, the mystery of the dispatches intrigued him enough to continue, despite her irritating game of making him investigate what she already knew. If she’d been one of his men, he would have demanded a brief summary of the information, not this long, drawn-out affair. But this was the empress, and he needed to play her game if he wanted to regain any of the respect he’d lost.

The last few letters pointed to Hostilius Pacilus, the provincial governor of Lucrilla, as someone of interest in this plot. Not that it was very surprising. Any man who would offer his own daughter to the imperial harem in order to gain the emperor’s favor was despicable at best. Rumors spoke of how he’d risen to power by eliminating rivals and burning down sections of Tivola, buying them cheaply from the ashes and rebuilding fancy villas on them to become the wealthiest man in the province. Combined with the recent insult of Emperor Sergius choosing to wed an Alpirion over a purebred Deizian, and he could see Hostilius as a prime suspect for wanting to overthrow the emperor.

“If the clues all point to Hostilius, why doesn’t the emperor arrest him?”

“You’re not thinking of the potential consequences, Galerius.” Azurha rose from her chair and took the most recent letter from his hand. “If Titus went around arresting every Deizian who could possibly be a threat to him, we’d have an uprising on our hands faster than you could draw your sword.”

He mulled over her words and agreed. One provincial governor had already tried to kill him, and he suspected the emperor’s choice in a wife had gained him more enemies among the ruling class than friends. And yet, for all the harsh criticisms he’d heard whispered during the wedding festivities, he’d come to begrudgingly respect the new empress. She was sharp, courageous, and had more than once shown her love and loyalty to the emperor.

“Where do I come in to this?” he asked, hoping to get to the essence of his mission so he knew what was expected of him. He was a man of action, not thought. A soldier, not a philosopher. And right now, his muscles twitched as though he were about to order a charge on the battlefield. 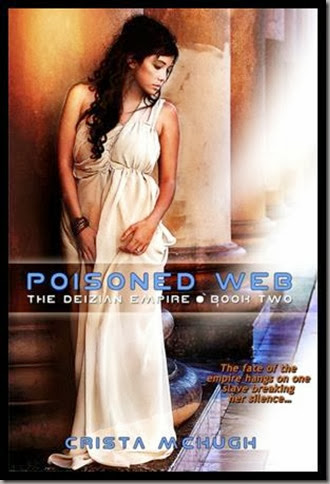 As the Deizian Empire prepares for the upcoming wedding of Emperor Titus Sergius Flavus and Azruha, one mystery remains unsolved—the sudden and unexplained death of the former emperor. And as her wedding gift to Titus, Azurha wants to give him answers. She suspects an unknown poison was involved, and her search for the truth enlists two unlikely allies.

Modius Varro’s thirst for knowledge caused an uproar in Emona three years ago and exiled him to the border town of Madrena. But when Titus falls victim to the same poison, his expertise in medicine becomes essential in solving both the riddle of the former emperor’s death and finding a cure to save the current one. His search leads him to far reaches of the Alpirion realm, to an ancient culture shrouded in secrets, and into the arms of one slave who must break her silence to save the empire. 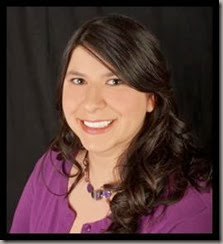 Growing up in small town Alabama, Crista relied on story-telling as a natural way for her to pass the time and keep her two younger sisters entertained.

She currently lives in the Audi-filled suburbs of Seattle with her husband and two children, maintaining her alter ego of mild-mannered physician by day while she continues to pursue writing on nights and weekends.

Just for laughs, here are some of the jobs she’s had in the past to pay the bills: barista, bartender, sommelier, stagehand, actress, morgue attendant, and autopsy assistant.

And she’s also a recovering LARPer. (She blames it on her crazy college days)

For the latest updates, deleted scenes, and answers to any burning questions you have, please check out her webpage www.CristaMcHugh.com

Posted by authorkarenswart at 3:01 PM