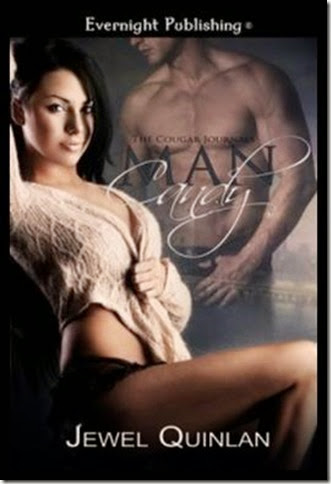 Commercial real estate agent, Ava Baldassari, is done with being a good girl. Recently having revamped her self-image, home and wardrobe she finds there is one thing left that needs updating; her sex life.

She runs into her friend and running partner, Cole, one night when she is out with a friend. A bit drunk she flirts with him and is surprised by the enthusiastic response he gives back.

Things reach a point where she has to make a decision whether or not to cross a line she never has before.

Ava is forty and Cole is twenty-five, is she really ready to become a cougar?

Where you can buy Man Candy:

“I’ve been wanting to do this for a while,” he whispered in my ear, still pressed against me as he unzipped my dress.

Me too, I wanted to say. But I didn’t. I was adrift in the onslaught of sensation as he slid the fabric from me, trailing kisses down my back as it went. Making me aware as I never had been of how sensitive the skin there could be. When he reached the small of my back, he lingered, kneading my skin with his tongue and teeth. His hands ran down my legs and then back up to my breasts, and I savored the feel of his fingers. My breaths came heavier. I had been needing this for too long.

He rose and turned me toward him, towering over me. His cap was gone and his dark hair was askew, as though he had run his fingers through it, giving him that sexy just-woke-up look. I slid my fingers from the waist of his jeans, underneath his shirt, to his muscled back. The ridges of strength there were too tempting beneath my fingertips. How did he find the time to work out that much? I had to see with my own eyes. Fisting the hem of his shirt in my hands, I pulled his t-shirt up to remove it. Why should I be the only one standing here naked? With a chuckle, he complied, lifting the shirt over his head and flinging it away in the casual manner of an underwear model on TV.

Sure, I had imagined what he looked like with his shirt off, but the reality was ten times better. He had a runner build, but that was filled out with muscle. The planes of his chest were topped by strong shoulders and arms, which seemed to blossom over the lean ridges of his abdominals, creating a definite contrast. I couldn’t help reaching out and touching him. I ran my hands over his skin, tracing my way upward to the light coating of black hair on his pectorals. He leaned his pelvis into me, forehead on mine, his erection pressing into me, making me shiver with anticipation.

We were on the brink of something oh-so-good, and I was dying to plunge ahead. Yet, I hesitated. Questions burned in my mind. I tried to hold them back, knowing serious talk would ruin the moment. That lasted about two seconds before I gave in.

He lifted his head from mine and looked at me.

I cocked my head at him. “Did you just say you’ve been wanting to do this for a while?” Had he been scoping me out all this time, as I had him?

He nodded. “Who wouldn’t? Look at you. You’re gorgeous.”

I glanced down at myself. My ample buxom looked perfect in the black, lace push-up bra I wore, and the matching thong sat just right, low on my hips. I still had on my red heels, which added a lady-killer effect.

Then I glanced at him. The smoldering look he gave me trumped anything I observed on the physical plane. The messages coming from him on a subliminal level promised pleasure that made me squirm with heat.

“You know it’s going to be good between us, Ava,” Cole said.

Jewel will be attending RomCon in Denver CO September 25-27.

Readers can get tickets to sit with her at the luncheon event, she would love to meet you!

Character Bio: Ava has had enough of being a good girl. Prior to the start of the story she revamped her wardrobe, car and lifestyle and is looking for similar change in her sex life. She is a commercial real estate agent and 40 years old but not dead yet. She is single and still wants to live her life and finds herself questioning all the boundaries and limitations that society puts on women in general.

Well, I’m Italian, so I have an innate passion that can be my best and worst enemy. On the one hand I can get really into a project like, say…redecorating my bedroom. But on the other hand it can lead to me repainting the room myself all night until it’s done.

Hm. That’s a tough one. I suppose it’s that even though I act tough on the outside I still have feelings and want to be treated like a lady.

I don’t normally like chocolate but once in a blue moon I get a craving for Reese’s Peanut Butter Cups. Mixed with vanilla ice cream it’s to die for.

Never getting married. But when I have a steady flow of dates I don’t feel too worried about this one.

To have fun in life. I work so hard at my day job to make money that none of it would make any sense if there were no payoffs like vacation with a gorgeous man.

Hot-and-sexy-single. Happy with life, and having fun.

It’s a mix of killer and classy. I have one simple rule when buying clothing for work. If I can’t answer yes to the question “Would I wear this to happy hour?” then I don’t buy it. That’s the invisible line between dreaded work clothes and work clothes that make you feel great.

From the way my parents used go on and on you would think I was the world’s worst daughter. But most of my rebelling is against the standards of society. I refuse to be put into a box. I am determined to live my life the way I want it. The more I do what I want, the happier I have become, so I must be on to something.

A high-end glass of cabernet, and an empty inbox, and a hot man who tops off my glass with more wine any time it gets low. In between he kisses me passionately but I won’t say where.

A little disconcerted after my night with Cole, who is fifteen years younger than me. There are just so many things to consider when taking a leap like that. It changes your whole mind set. But I don’t feel as disoriented as I thought I would. You know, like the way you feel after your first one-night-stand in college. It was an unusual encounter but I feel no guilt. It was more like a mind-stimulating push. Overall I was glad for the experience.

My Porsche Cayman GTS. It’s my pride and joy. And is fully paid off so it’s mine. I often park it far back in the parking lot so it won’t get dinged by other drivers opening their doors.

My hair. It’s long, dark and glossy. That has to be it. At least once a day some random stranger comments on how beautiful it is. Sometimes I forget since I see myself in a mirror every day. But I’m glad people go out of their way to remind me what a gift I was given.

When people interrupt me while I’m eating. I tell you, customer service in the US has gone bats**t crazy! Why do I need three different people to stop by and make sure my food is okay? Just leave me the heck alone to eat so I don’t have to be rude and answer with a full mouth. If I need something, I will flag you down. We Italians aren’t shy.

Did I mention the Porsche Cayman? Lol. Okay, no, that’s not really it. For me it’s being able to

take care of myself. I used to hate asking my parents for money when I was a kid.

Reese Witherspoon. But it’s more like a love-hate thing. She’s so darn beautiful and sweet that I hate that I can’t be her.

That I didn’t revamp my life before now. Things would be so different now had I done this sooner!

Confidence. I may get mad at an alpha male but I’ve never wanted to throttle one. Wimpy beta males who can’t make a move or a decision drive me insane.

I like women who are go-getters as evidenced by my closest friends. We don’t sit around and cry about a relationship gone bad. We drag each other up on to our feet, by the hair, and move on to the next one.

Thor. Does it get any hotter than that?

Oprah Winfrey. Is there any greater example of a woman’s badassness?

Nothing. I got to this point of my overall-great-life by being who I was made to be. Without the exact ratio of good, bad and ugly that I have I wouldn’t be who I am today.

Don’t wait for your ship to come in. Swim out to it. 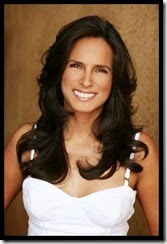 Jewel Quinlan had an abundant imagination and a strong desire to write novels from a young age. She particularly enjoys writing paranormal and fantasy romance but also writes contemporary as well.

An avid traveler, she has visited fifteen countries so far (which she enjoys using as settings in her novels) and has plans to see more of the world. She has a particular fondness for Bavaria and studies the German language as one of her hobbies.

During the day, she works as a pharmaceutical sales representative and, at night, she writes romance. She currently lives in Orange County, California with her dog Penny.

For more information about Jewel Quinlan

Posted by authorkarenswart at 1:25 PM