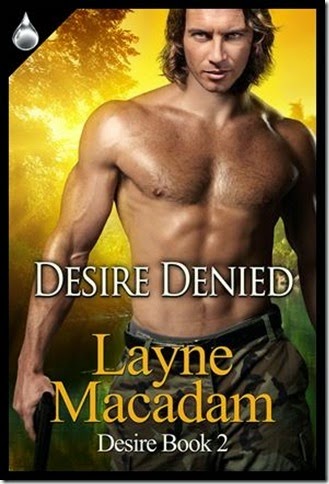 Desire Denied
Desire Series
Book 2
Layne Macadam
Genre: Erotic Contemporary
Publisher: Liquid Silver Books
Date of Publication: April 6 2015
ASIN: B00V2IBUGW
Number of pages: 380
Word Count: approximately: 101,000
Cover Artist: Liquid Silver Books
Book Description:
Ex-SEAL Zach Buchanan can sum Beth Carmichael up in two words, trouble-magnet. Ever since his kid sister, Loretta, befriended the girl she had been in and out of trouble, and Beth a constant thorn in his side.
For six years and a multitude of reasons he’s fought his feelings by avoiding Beth, but when she telephones out of the blue from Columbia with the news Loretta has been abducted, he is forced to confront Beth again along with his demons.
To rescue Loretta, they must put aside their history and start afresh, because the ransom terms are specific: Beth must make the delivery. Simple enough until things turn sour and they are forced on a journey through thick jungle and mountainous terrain.
Thrown together, Zach’s eyes are opened and he learns some home truths about himself: could he have misjudged Beth all theses years?
Available at Liquid Silver Books

Bright and early next morning Zach, wearing cargo shorts, runners, an open neck shirt, and a chirpier disposition, tapped on Beth’s door. Havoc’s words were balm, and he was going to start afresh, put the past behind him. Tomorrow was going to be hellish. Today he planned to be calm and relaxed. That would rub off onto Beth too; put her more at ease, God knows she must be scared witless.
“Morning Zach, come on in.” She stood aside and he breezed in closing the door behind him.
“Hi, how did you sleep?” he asked as she walked over to the bed.
“So so. What about you?” She glanced up from stuffing things into her backpack.
“So so.” He flashed her his pearly whites.
She returned his smile and then went back to her task. It gave him the opportunity to study her face. The smudgy dark circles under her eyes were a dead give away. She hadn’t slept a wink, but it didn’t mar her beauty. She’d put on weight since their last encounter, her bottom was rounder, her breasts bigger, more lush. He watched with lust and envy as they jiggled and swayed beneath her shirt, his fingers itching to fondle the delightful flesh as she continued packing.
“All done.”
Beth caught him unawares as she turned toward him and raised a brow, her lips pursing. The goofy grin slid from his face. Yeah, she’d caught him gawking, but what was he, dead?
He cleared his throat. “If you’re ready, we’ll head downstairs to join the others.”
“Ready as I’ll ever be.” She smirked, and with her pack slung onto her shoulder trounced out the door leaving him to shadow her to the lift.
The down button was jabbed with a pointed finger. The lift arrived, and they stepped into the small box that felt infinitely smaller with just the two of them than it did the night before with the addition of Hawk and Havoc.
When the doors opened on the ground floor it was Hawk, chatting with the concierge, who first came into view. He was hard to miss. Apart from his size and red hair, he was dressed in kickass boots, baggy shorts, and a Hawaiian print shirt that was so loud it screamed tourist. And funny enough, he blended in, just another American college kid down south taking in the sites.
Havoc, in faded khaki pants, a common garden-variety polo shirt, was also inconspicuous despite his size and the Akubra he held in his hand. He was at the front desk checking out when Beth, and he walked up to him.
“You eaten?” Zach asked.
“Yeah, in my room how about you guys?”
“Same here,” Zach replied. “How about you Beth?”
“Yep.”
“Morning all, what a beautiful day.”
Hawk joined the group, chirpy as a lark in spring. “Wasn’t that the best breakfast ever Beth? I swear I’m so full I might just have to skip lunch.”
“Yes Hawk, breakfast was really good, but let’s not get crazy.” She laughed.
Zach stiffened. His mouth descended into a thin line and his hands fisted. He wanted to hit something, more specifically—Hawk’s face.
“Are we set to go then?” Havoc asked slipping his wallet into his back pocket.
“I checked out earlier, and I’ve put the rest of my gear in storage for a week. Do you think that will be long enough?” Beth asked of no one in particular.
“You’ll be back in New York sipping cappuccinos in less than a week love.” Havoc was optimistic.
“Jeep should be waiting out front. I asked the concierge to organize it,” Hawk told them with a grin.
“What do you want a medal?” Zach snarled and received a thump in the chest from Havoc with the back of his knuckles for his trouble.
“Huh.”
“Right then, if we’re all ready let’s move it.” Havoc led the way to the front of the hotel.

Did you always wanted to be a writer? If not what did you want to be?
No, I wanted to be a school teacher of all things.
When did you first consider yourself a “writer”?
When I typed “The End” on my first book, Desire Unleashed. Then of course the rejections came so I truly didn’t call myself a writer until that first contract was signed.
How long did it take to get your first book published?
I think all up from writing the first draft to publishing it was about six years.
Do you do another job except for writing and can you tell us more about it?
Yes, I juggle a few jobs. Apart from being a wife and mother I work full time doing admin type work interpreting legislation.
What is the name of your latest book, and if you had to summarize it in less than 20 words what would you say?
The title is Desire Denied. He believes she’s a trouble magnet, but has he misjudged her? Action, adventure, and burning passion await them in the Columbian jungle.
Who is your publisher? Or do you self-publish?
The Desire Series is published by Liquid Silver Books, Wolf on Wheels, Book 1 in the Heritage Series is published by Syn Publishing, and Obsession Down Under is published by Soul Mate Publishing. Star Crossed Lovers is self published.
How long does it usually take you to write a book, from the original idea to finishing writing it?
That’s difficult as my books range from approximately 38,000 words to 105,000 words so the time factor varies considerably. Sometimes I might dash out eight or ten chapters in two or three weeks and at other times life gets in the way and it could take me three weeks to write one chapter.
What can we expect from you in the future?  ie More books of the same genre? Books of a different genre?
I have two possibly three more books to complete in the Desire Series and three or four in the Heritage wolf shifter Series.
What genre would you place your books into?
All my books are romance with a HEA. The Desire Series and Obsession Down Under are contemporary, the Heritage Series is Paranormal and Star Crossed Lovers is sci-fi.
Do you have a favorite character from your books? And why are they your favorite?
I adore all my leading men, they are like real people to me, but I do have a soft spot for Whip McGregor in Obsession Down Under. He is hot, amazing, generous, and funny.
Do you have a certain routine you have for writing? ie You listen to music, sit in a certain chair?
I have my special recliner chair, my laptop on my lap, and my mug of tea by my side!
Do you read all the reviews of your book/books?
Definitely! At least all the ones I know about.
Do you choose a title first, or write the book then choose the title?
A bit of both, really. All the books in the Desire Series had their titles before they were written. Obsession Down Under was originally called The Perfect Rose, and Star Crossed Lovers started out as Super Nova Princess. I try and title the books to reflect what’s inside and sometimes I don’t know that until the story is complete!
How do you come up with characters names and place names in your books?
It depends on the story. Some books call for traditional names, others more modern names, and some call for the unusual. Desire Denied, the hero is Zach Buchanan while Whip McGregor is the protagonist in Obsession Down Under, both contemporary books so choosing their names was easy.
Danikyle is the hero in my sci-fi Star Crossed Lovers so a bit more unusual. For him I just combined Daniel with Kyle. Caleb Grayson is the hero in Wolf On Wheels. Caleb is an old name most likely from Hebrew meaning “dog”. I thought that was appropriate as Caleb, being a wolf shifter, is very old and wolves and dogs are considered to be part of the same family. As for places, again it depends on the story.
Which format of book do you prefer, eBook, hardback, or paperback?
eBook
What is your favorite book and Why?  Have you read it more than once?
Pillars of the Earth. I love the history, the architecture, and the intricate way Mr Follett has interwoven the characters and how good prevails over evil.
Do you think books transfer to movies well? Which is you favorite book to movie transfer?
Yes and No. I’ve seen some good ones and I’ve also been disappointed. The Harry Potter Series transferred very well.
Your favorite food is?
Italian, French, Thai—I like them all!
Your favorite color is?
Red

Layne lives with her husband, two dogs, and a cat on the mid-eastern coast of New South Wales, Australia. In addition to being an author she has a degree in history and holds down a full-time job.

She has always been an avid reader and voraciously consumes all types of fiction, but she particularly loves a happy ending, so writing romance seemed a natural progression for her. But as she sat at the computer one day — staring at a blank screen — it all seemed rather daunting. Yet once she finally started tapping on the keys, the words kept flowing, and what was meant to be a short story turned into a full-blown novel, Desire Unleashed, the first book in the “Desire” series.
Layne writes contemporary romance, paranormal, and sci-fi. With her passion for travel and a love of history an historical romance is not outside the realms of possibility.
When she’s not writing, you might find her tackling a craft project, walking by the lake, or in the kitchen creating some culinary delights.
Website : http://www.laynemacadam.com
Blog: http://laynemacadam.blogspot.com.au
Twitter: https://twitter.com/layne_macadam