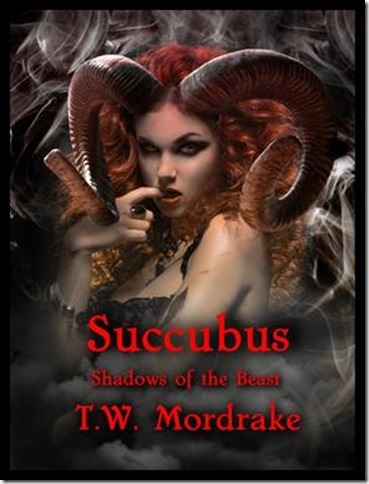 Succubus: Shadows of the Beast

Entering the real world after college often educates one to the true horrors of the harsh obstacles life has to offer. For Kailey Yates the discoveries are far more terrifying and dangerous. Two days before she graduated with a degree in investigative journalism, her brother Vincent is found dead in his swimming pool with a syringe stuck in his arm. His death is ruled as a suicide, but Kailey doesn't buy it.

She suspects Vincent's new wife Cassie is the one who actually killed him. Her suspicions are drawn from his rapid health deterioration during his short six month marriage. During one of her last Skype conversations she had with Vincent, Kailey's roommate Raven witnesses their conversation and immediately senses that Vincent is being soul-drained by a succubus. Since Raven is a witch, Kailey has no doubt about her friend's perception and concludes that Cassie must be the demon responsible.

Kailey leaves Boston and flies to Seattle for her brother's funeral. While there she investigates the circumstance surrounding his death. She uncovers dark information that leads her to Nocturnal Trinity, a nightclub in the heart of Seattle. And worse, the underground club is run by a powerful alliance of vampires, demons, and witches that wish to protect Cassie at all costs, which includes killing Kailey or anyone else if necessary.

Warning: Adults 18+ due to adult theme/scene.

Kailey Yates knew that her brother Vincent would never have killed himself had it not been for his new wife, Cassie. And yet, Kailey stood at Vincent’s graveside while the workers prepared to lower her brother’s casket into the cold ground, his final resting place.

The gray overcast Seattle sky with its chilly swirling mists set the mood for the burial and the gloom that also possessed her broken heart. The towering leafless oaks in the cemetery were sinister skeletons forewarning that the dangerous kiss of winter’s death would soon settle over them, harsher than ever before.

One never escaped death, but sometimes death came too early with an unfairness that made Kailey want to scream at the heavens from her inner rage and loss. After all, her brother had been a successful attorney in his early thirties and destined to become the first in their family that had graduated from college to live a prosperous lifestyle. He was never a man who entertained suicidal thoughts.

The workers and his ritzy friends from the Langston Law Firm had come out in great number. She estimated no less than one hundred people had arrived. Never had she seen so many expensive suits and vehicles. Coming from a modest middleclass family, she never imagined she or her brother would rub elbows with the upper class of society, but he had been adamant that they would be wealthy and worked painstakingly to get them there.

While the priest gave the eulogy, the men and women stood stoically silent, their eyes staring at Vincent’s casket. The priest finished speaking and led the audience in a proper prayer, praying that Vincent’s soul found forgiveness and mercy for leaving this world by suicide.

How fitting, Kailey thought, wringing her hands. Blame the innocent for what the murderer did.

While the others respectfully closed their eyes, she gazed around, trying to see Cassie, but the two men standing in front of her sister-in-law blocked Kailey’s view. Moments after the priest finished his lengthy ill-placed prayer, the wealthy people mingled to hug, shake hands, and chat.

The slight breeze swirled Kailey’s long reddish-brown curls, forcing her to pull her hair back and letting it fall onto her back and shoulders. Her jaw suddenly tightened, hiding the wrinkles that deepened into cute dimples whenever she smiled. Her hazel eyes suddenly blazed with anger and vengeance.

Across the grave Cassie stood dressed in a form-fitting black skirt that accentuated her perfect curves and perhaps distastefully revealed more leg than what was suitable at a funeral for one’s husband. Her tight long-sleeved jacket cut off at her midriff, revealing her well-defined abs. She wore black-netted hose and velvety black high heels. Hell, streetwalkers wore more clothes in this cold weather.

Cassie hid her pale face behind a white handkerchief and sobbed. Kailey understood how a man might be immediately drawn to Cassie’s exquisite beauty. Her slender oval face with high cheekbones gave her a regal presence even at this dismal funeral. She carried herself with the utmost grace, in spite of her poor choice of attire, but she also had a seductively dark energy radiating from her.

When Cassie’s dark eyes met Kailey’s, Cassie lowered her hands and meekly folded the handkerchief. Her tearless eyes weren’t even slightly tinged red. A bit of amusement curled Cassie’s pouty lips. An odd flicker of recognition blazed in her eyes and hinted slight detestation, even though they had never met in person. Kailey felt the resentment and didn’t understand why, unless Cassie had somehow figured out that Kailey suspected her of murdering Vincent, which Kailey did. Perhaps Cassie read it in her eyes. Or worse, perhaps this she-devil could read Kailey’s thoughts.

Moments later, Cassie broke their connection and returned to her fake sobs, wiping at her eyes with the cloth in a way that demanded pity from the solemn onlookers.

One of Vincent’s former attorney friends wore a gray pinstriped suit and overcoat. He approached Cassie to console her. He was trim with brown hair, a firm jaw, and offered a tender smile as he spoke to the widow. She buried her face against the man’s chest. Obviously surprised by her approach, he gently patted her back from an awkward distance, but Cassie aggressively wrapped her arms around him. To lessen his discomfort in the situation, he finally leaned in closer and embraced her.

She nuzzled against his chest, reached beneath his jacket, and clung to him. Her body shook with what people nearby might consider being violent heaving sobs. He rested his chin atop her head and whispered. His hands gently rubbed her back, and she seemed to calm at his touch and gentle words. She stopped sobbing and became less broken.

Kailey also battled the growing urge to march across the cemetery and rattle the woman with several jabs to Cassie’s face and swift punches to her stomach.

Another place. Another time.

Kailey’s sister-in-law, even now, wore little makeup. Her lipstick was a bright red hue, which made her pale reflection appear even lighter. Her raven hair was neatly styled with silver pins and sprigs of Lady’s Breath. Her pretend tears had not smudged the dark mascara around her eyes, and with her ashen complexion she resembled a corpse better than her brother probably had at his viewing. To others, even the hundred or more attending the funeral, she appeared stately, reserved, and the perfect widow.

Well played, Kailey thought. You’ve fooled them, but not me.

Cassie was a cold parasite that had preyed upon Vincent, seduced him into marrying her, and then taken his life to possess his wealth and million-dollar estate. Kailey couldn’t act on her suspicions alone. She needed proof. The coroner had ruled her brother’s death as a suicide, but she believed it was not. Relevant details had never been disclosed to her, and she wanted answers.

Vincent had been murdered. Cassie had killed him, made it look like a suicide, and Kailey was determined to prove it.

Worst quality: does not fully trust others; Best quality: is searching for the facts to solve problems.

I wish others understood how much I want to be a part of a family-like relationship.  After losing my parents at an early age, and then my brother just shortly before my college graduation, I feel empty and lost without anyone to comfort me.

I fight MMA style to hide my insecurities.  If I look tough on the outside, perhaps others will view me as a stronger person on the inside.  Slowly, I’m finding my confidence on the rise.  I’m getting bolder and taking more chances.

Understanding of people and society.  Why do people act like they do?

I’m currently in a hot sensual relationship with a werewolf.  Not certain where this might lead, but definitely enjoying the intimacy.

I train a lot in martial arts so I wear a lot of sweats, yoga pants, and fitness bras.  But take me out on the town, and I love heels and a short skirt to show off my tanned legs.

I suppose many people view me as a major rebel for wanting to be a MMA contender, but the challenges of training and sparing are actually more helpful in allowing me to sort through all the mental garbage I’ve endured during my young life.  I get out my frustrations in the ring or by beating a punching bag.  One to one, however, I try to figure out what makes others tick and try not to be judgmental outside the ring.

Making my own choices without someone else trying to dictate that I do something else.

My hazel eyes or dimpled smile

I cannot stand bullies or controlling people.  Either type sets me off, making me avoid them at all costs.  However, if such attitudes are focused on another who cannot defend herself, I will step in and stop the bully.

I’m still at odds with Flora.  I don’t think there’s much she can do to redeem herself with me.

Not visiting my brother before he was killed.

Same as above, but add pouty lips, toned legs and ass

That I was taller.

Get what you give

T.W. Mordrake writes Urban Fantasy, Paranormal Romance, and Fantasy. A lover of all things mystical, T.W. explores the strange, unusual, and haunted places in the U.S., which lends to the underlying charm for writing about the paranormal creatures that lurk in the dark shadows of night.