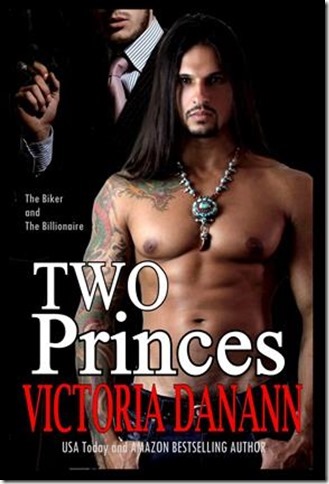 Two Princes: The Biker and The Billionaire

Brigid Roan is a graduate student at the University of Texas. She had no trouble getting her thesis approved, but finding a Hill Country motorcycle club willing to give her access to their lifestyle had started to seem impossible. Then she got a lead. A friend of a friend had a cousin with ties to The Sons of Sanctuary.

What she wanted was information to prove a proposition. What she didn’t want was to fall for one of the members of the club. Especially since she had set out to prove that motorcycle clubs are organized according to the same structure as primitive tribal society.

Brash Fornight was standing in line at the H.E.B. Market when his world tipped on its axis. While waiting his turn to check out, his gaze had wandered to the magazine display and settled on the new issue of “NOW”. The image on the cover, although GQ’d up in an insanely urbane way, was… him.

After reading the article, Brash threw some stuff in a duffle and left his club, The Sons of Sanctuary, with a vague explanation about needing a couple of days away. He left his Jeep at the Austin airport and caught a plane for New York, on a mission to find the guy who was walking around with his face.

Two brothers, one a player, one a playboy, are on a collision course with destiny and a woman who thought she won a prize when she was allowed a look inside the Sons of Sanctuary MC.

“Sir?” Brash Fornight gradually became aware that someone behind him in the grocery checkout line was trying to get his attention. “Sir?” He refocused and glanced behind him. The woman leaning on a cart overflowing with chip bags and cookie boxes nodded toward the cashier indicating that it was his turn to move forward. Brash looked her in the eye and had to give her props. Most people wouldn’t have the balls to try to herd a guy wearing Sons of Sanctuary MC leather.

The club employed a woman who cooked and did grocery shopping several times a week as part of her job description, but Brash didn’t like to explain his relentless craving for peanuts and he liked being teased about it even less. He didn’t know whether it was the Vitamin B or the fat or just because he liked the taste, but he couldn’t imagine going a day without them.

That’s how he came to be standing statue still In the grocery checkout line, being prompted by some woman with more nerve than sense. While he was waiting, his eyes drifted over the magazine display and settled on the cover of “NOW”, on the Most Eligible Bachelor edition no less. The debonair figure staring back was wearing Brash’s own face and body. He looked different with short hair and a four thousand dollar suit with the shirt fashionably open at the neckline, but the similarity was inescapable.

On impulse he grabbed the magazine and tossed it onto the conveyor belt with his week’s stash of peanuts.

He stuffed the bags into the saddlebags of his bike and roared toward home, nervously tapping his fingers on handlebars at red lights, riding on shoulders to keep from slowing down. He was anxious to get to the privacy of his own room and read about Branach St. Germaine.

Two beers, one jar of peanuts, and one “NOW” article later, Brash was sitting on the edge of his bed looking at the wall, seeing nothing but his own heavy thoughts. He pulled out his phone, looked up a website, and waited on hold for ten minutes to hear the time of the next flight from Austin to New York.

There was a flight to Newark in a little over three hours. He looked at his watch and calculated the time it would take to drive from Dripping Springs at that time of day. As he booked the flight, he stood up, walked to the small closet, grabbed a duffel bag, and began shoving stuff into it. Ten minutes later, he closed his door and locked it, threw the duffel over his shoulder, and headed straight for the office downstairs. He dropped the duffel on the hallway floor beside the closed door and knocked.

“Yeah?” Brash looked inside, glad that his dad was by himself, and stepped in. “What’s up?”

“I’m takin’ personal time, Pop. Gonna be gone for a couple of days.”

“What the hell is ‘personal time’?”

The gruffness made Brash smile. “It means I’m not gonna be here if you call and I’m not tellin’ you why.”

The Sons of Sanctuary President looked up at Brash, over the top of his readers, and narrowed his eyes. “You got a secret?”

Brandon Fornight studied his son for a minute. “True enough. Is it the kind of secret that could affect this club?”

“Bein’ purposefully vague, are you?”

Brash grinned. “That’s why they call it personal time. But I expect to be back Friday.”

“You gonna have your phone with you?” When Brash nodded, Bran looked back down at his ledger in a deliberately dismissive gesture. “Well, get outta here then.”

Brash parked his bike in the airplane hangar. The structure had already been on the property when the club had bought it and turned it into a compound twenty years earlier. They used part of it for vehicle maintenance and repair and part for parking.

Some of the guys who were working looked over and shot curious glances his way when Brash threw his duffel into his pickup and started it up, but it wasn’t their way to ask questions. The Sons figured that if somebody wanted you to know something, they’d tell you.

Brash took a cab to a midtown hotel, wondering all the way why human beings would choose to live in such a place. As he slid his credit card across the hotel counter to the agent on duty, he glanced at the name, Brandon Fornight. It seemed unlikely that it was a coincidence that that the mysterious look-alike’s first name began with the same four letters. He ordered room service and pulled out his laptop.

Getting intel on the guy didn’t take advanced ops. Within an hour Brash knew where Brannach St. Germaine worked, what kind of car he drove, what kind of women he dated, who his tailor was, and where he liked to dine. There was no shortage of photos online, but the one that grabbed his attention wasn’t one of the many with starlets or debutantes on his arm. It was the one taken with his arm around his mother as they were arriving together for some red carpet fundraiser. Brash had an almost irresistible compulsion to reach up and touch her face on the screen in front of him.

The knock on the door signaled that room service had arrived. It cost a fortune, but looked and tasted like shit. So he closed the computer and went out for a walk to clear his head and find something edible. 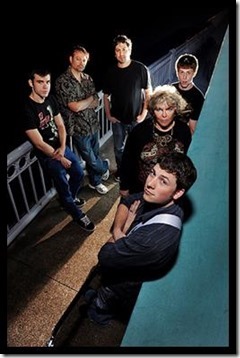 USA Today Bestselling Author, Victoria Danann, is making her debut into Contemporary Romance with releases in May and June 2015, after taking the world of PNR by storm.

Victoria’s paranormal romances come with uniquely fresh perspectives on “imaginary” creatures, characters, and themes. She adds a dash of scifi, a flourish of fantasy, enough humor to make you laugh out loud, and enough steam to make you squirm in your chair. Her heroines are independent femmes with flaws and minds of their own whether they are aliens, witches, demonologists, psychics, past life therapists, or financial analysts from Dallas. Her heroes are hot and hunky, but they also have brains, character, and good manners – usually – whether they be elves, demons, berserkers, werewolves, or vampires.

The first book of the Knights of Black Swan Paranormal Romance Series, My Familiar Stranger, was nominated for Best Paranormal Romance of 2012 by both Reviewers’ Choice and Readers’ Choice Awards. All of her books have opened on the Amazon Best Sellers list and earned Night Owl Reviews Top Pick awards.

Many have appeared on Listopia Book of the Month as #1 across all genres.

Photo- If you’re interested in me personally, I am also a classically trained musician who defected to Classic Rock and that’s my first love. Yeah. Even more than writing.

This is Roadhouse, the very best in Classic Rock, taken near The Last Concert Cafe, Houston Texas, 2011. I was the utility player which means I played rhythm guitar, keyboards, sang backups and a few leads.

Posted by authorkarenswart at 8:11 PM