Taken from her people as a foal, Saga is plunged into a world completely foreign to her. All Travelers know other worlds exist, but they don’t expect to actually experience them until they are adults. Saga must learn to adapt to her new surroundings if she wants to survive until she’s old enough to be able to Travel among worlds and return to her people.
Jarl is the son of the Vanir High Mages and heir to the throne. Though young, his parents entrust him with the care and training of the captured Traveler foal. However, none of the Vanir understand just how intelligent the Travelers are and they may have given Jarl more than he can handle.
When Saga escapes, the High Mages decide she is too much trouble and has to be killed. Jarl defies his parents and goes after her. Will they remain enemies when Jarl finds her, or will they form a bond of friendship strong enough to save Saga’s life? 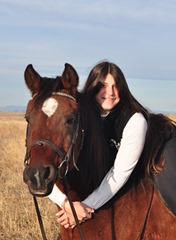 Julie has been many things over the last few years, from college student, to  bookstore clerk and an over the road trucker. She’s worked as a 911 dispatcher and in computer tech support, but through it all she’s been a writer and when she’s not out riding horses, she can usually be found sitting in front of her computer. She lives in Colorado with her three cats, her vampire-hunting dog Kira, her new horse and Traveler-in training, Triska, and her Irish Sailor.She is the author of many Vampire and Ghost-Hunting Dog stories and the young adult fantasy series Tales of the Travelers. She’s a member of the Horror Writers Association and the Dog Writers of America Association and the editor for Steampunk Trails fiction magazine.

I didn’t actually know I could be an author, or I probably would have chosen that career path earlier in life. I wanted to be a paleontologist.

Saga, Legends of the Travelers book 1. A boy and a young Traveler (horse-like being) form an unlikely friendship and then fight for their very survival.

I write young adult fantasy. The sequel to Saga is complete and should be out sometime next year. You’ll see some urban fantasy from me as well in the very near future.

There was never any question that I’d be writing fantasy and science fiction. It’s what I love to read. The young adult thing happened because I enjoy telling stories about younger main characters so it evolved naturally from that.

No one really inspired me to write. I just started doing it when I was really young.

I can write anywhere as long as I have something to write with. When I’m at home, I’m usually at my desk with some music on random (no, I don’t do play lists).

Usually. If I know about them.

Usually the title follows the book. Every once in a while the idea and the title come at the same time. I can’t think of a time when the title came first.

I take a look at my characters’ culture and try to find appropriate names and place names to reflect that based on earth cultures. I also use behindthename.com a lot.

Some of it comes as I go along. Some of it evolves from what the story needs, some of it I come up with right away.

Well, I do like to write about strong friendships.

One favorite...this is an impossible question. One of my favorite series is the Green Rider series and yes, I’ve read them more than once.

Sometimes they do. Favorite, probably The Last Star Fighter. Worst...there are so many.

$10 Amazon Gift Card
a Rafflecopter giveaway
Posted by authorkarenswart at 9:30 AM