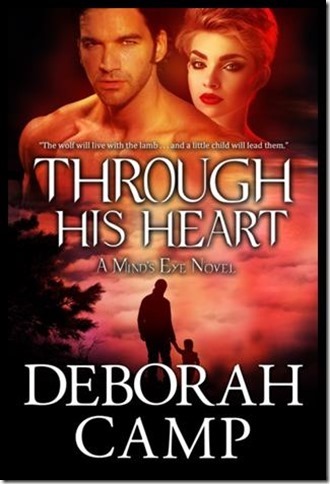 “Sending you an SOS.”

When psychic Trudy Tucker hears this plaintive cry in her mind and then connects psychically with a little girl’s kidnapper, she is drawn to a small town in Missouri where everyone is suspect – including herself and her lover, celebrated psychic detective Levi Wolfe. As she and Levi work together to sort through whom and what to trust, an innocent life hangs in the balance.

Add it on Goodreads

“You don’t realize how special you are, do you?”

Trudy smiled. “Special to you.”

“Yes, and special as a psychic.” Levi straightened, stood, and threw his leg over the seat, sitting backwards in it to face her. Wrapping an arm around her waist, he hauled her up against the back of the chair. “What I do isn’t anything special. Talking to the deceased is a psychic staple. But what you can do . . . connecting with the thoughts of a living being . . . that is rare. In fact, I don’t know of anyone else who can actually do it. I know a couple of people who claim to be able to, but you’re the only psychic I’ve ever met who is the genuine article.”

She listened, but found holes in his argument. “What you do is special. You told me yourself that your accuracy sets you apart from other mediums.”

“Yes, that’s right. I’m good. Damn good.” He winked at her. “But you’re a diamond among crystals. You sparkle so brightly, you blind the rest of us.”

Her heart melted into a puddle as he gazed at her with undisguised admiration. “I’m not . . . am I? You really don’t know anyone who can do what I do?”

He shook his head slowly, deliberately, his blue eyes shining. “Nary a one.” He regarded her for a few moments before his lips twitched into a grin. “Does that freak you out?”

“A little.” She swallowed the lump in her throat so that her voice would emerge stronger. “Quintara has told me that I’m one of a kind, but I figured she was exaggerating – as she’s known to do.”

“This time your flamboyant mentor wasn’t embellishing the truth.” He rested his hands on her hips, his long fingers spreading across her jeaned backside. “At the risk of freaking you out more, I think you’ve only begun to reveal the extent of what you can do. You’re holding back because you’re afraid. I understand. I’ve been there.” His fingers flexed on her hips. “Take your time. Let it come to you gradually and don’t be scared. You’re strong and brave. You’ll be able to handle it.”

“Handle what?” She shook her head as a ball of nerves grew in her stomach.

“Your gift. Your incredible gift.”

She framed his achingly handsome face in her hands and her heart doubled in size. “How’d I get so lucky?”

“I’m the lucky one.” He turned his face so that he could kiss her palm, but not before she saw darkness pass through his eyes like a specter. “And you’ll agree with me whole-heartedly once we’re in Missouri.”

When I was in high school writing for the school newspaper.

I wrote my first “serious” novel and sent it to a publisher that was advertising for romances in Writers Digest. That publisher turned out to be Simon& Shuster and they bought that book (and others of mine after that). That was in 1978 and it was published in 1979.

I work with a rescue group – Animal Rescue Foundation – and we rescue dogs and cats from area kill shelters and place them in responsible, loving homes.

My new book is “Through His Heart” and it’s the third book in my Mind’s Eye series. This one deals with a kidnapping. Trudy and Levi travel to Missouri where Trudy tries to find the missing little girl and Levi deals with his hatred for his father, who happens to be the missing girl’s step-father.

This series is self-published on Amazon. My books have been published by Simon&Shuster, New American Library, Avon, and Harlelquin.

About five or six months.

I’m writing an historical romance right now set a couple of years after the Civil War in Texas. After it’s published, I plan to write another book in the Mind’s Eye series.

Romantic suspense. (Except for the historicals. They’re mostly westerns.)

Well, I am in love with Levi, of course. He’s my “dream” man. I love “bad boys with hearts of gold” and he’s the epitome of one. He’s gorgeous and has an even more beautiful heart. And he’s flawed and he knows it and is always trying to better himself.

I used to have a very set routine. I started work every day around 11 a.m. and stopped at 5 p.m. or when I had written a chapter. I sat at my computer desk in my upstairs office. When I got a router and laptops, the routine went out the window. Now I write all over the house – the kitchen, the sun room, the living room, etc. I carry my laptop and plunk down wherever I take a fancy. I write in spurts all day long and sometimes into the evening. I try finish a chapter a day and my chapters are from 12 to 24 pages long.

I do read reviews of my books. I think it’s important to do so since I spend a lot of money and time trying to get people to read my books and place reviews of them on Amazon and/or Goodreads. I take each one seriously and try to learn from them. Reviews are extremely important to me – probably because I have such a hard time getting them!

I need to have my title in place before I can write the book. A title speaks to me. Until I have one that fits perfectly, I can’t move forward.

Character names are also vitally important and I might play around with names for weeks before I finally find ones that work. Sometimes I’ll change a character’s name after I start the book because the name and character just don’t mesh like I thought they would. For secondary characters, I like to use names that convey something about them or are unusual to make it easier for the reader to remember them. As for place names – I use real locations a lot. If I make up a name for a place (like Cotton, Missouri in my current novel) then I use one that sounds as if it would be a real place (but there isn’t such a place in real life).

I write character outlines or profiles for each character. I might add to them as I go along. Maybe a secondary character stutters and I didn’t plan on that initially but I like it, so I add that to the profile.

Every book I’ve written has a moral that I hope the reader “gets.” For the Mind’s Eye series, the moral is that we should all be more tolerant and understanding toward people who are different from us.

I prefer ebooks. I love carrying around a library.

My favorite book(s) right now are the Fifty Shades of Grey (all four). I have read all of them several times and listened to them on audiobooks, too. And watched the movie.

I think they CAN transfer well if all the stars are aligned perfectly. My favorite book to film ones are the Harry Potter series. I thought they were very well done. Worst? Hmmm. So many! Janet Evanovich’s One for the Money was such a fun book and such a crappy movie.

Author of more than 45 novels, Deborah lives in Oklahoma. She has been a full-time writer since she graduated from the University of Tulsa. Her background as a newspaper reporter and editor helped her to write fast and enjoy research. After she sold her first few books, she quit newspaper work to become a freelance writer and novelist. Deborah's first novel was published in the late 1970s and her books have been published by Jove, New American Library, Harlequin, Silhouette, and Avon. She has been inducted into the Oklahoma Authors Hall of Fame and she is a charter member of the Romance Writers of America. She is also a member of the Author's Guild. She is an active volunteer with the Animal Rescue Foundation and is a foster home for dogs until they find their forever homes.