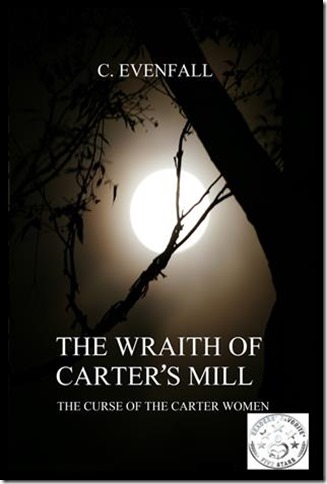 The Wraith of Carter’s Mill

The Curse of the Carter Women

The Wraith of Carter’s Mill chronicles five generations of women from the turn of the century to present day. It depicts in startling detail the result of an old curse and the wraith that haunts the family. Sensitives, The Guardians and The Forgotten tell the tale while the fourth shocking segment, Carter’s Mill provides the back-story. It reveals the shameful truth behind a century of sorrow and the curse of revenge that plagues the Carter women.

Zeb, the Carter family patriarch, is a hard, callous man. He runs his thriving sawmill, farm and family with an iron fist. When he commits an incredible act of cruelty, he ignorantly brings a terrible curse down upon all his kin. Martha Thompsons’ prophecy proves true as the family falls into ruin, and the women pay the price.

Almost a century after Zeb’s death, a Carter daughter is born with notable yet uncanny gifts. It will be up to Shyanne to unearth a long buried family secret and set an old wrong back to rights. Will she find a way to lift the curse and banish the accursed wraith that haunts her? If she fails, she risks losing her own little girl to the dark entity forever.

A small North Carolina community, where everyone knows everyone sets the perfect stage for this suspenseful drama. Rich in history and southern culture, The Wraith of Carter’s Mill harkens back to a time when life was simpler, and superstition was part of everyday living.

I think that I always wanted to be a writer. . .even at a very young age.

That didn’t happen until the release of “The Wraith of Carter’s Mill”. It was such a big project for me at the time, it was the biggest writing project I had ever attempted, so there was great satisfaction in completing it. . . and that’s when I realized that I will never stop writing.

Well, a lot of folks think that writing the book is the most lengthy of the process, but sometimes the actual publication process can take much longer. Between cover design, proofreads, editing and then more editing and more proofs. . .I would say that from the time I finished the first draft of the manuscript until it was actually published was about six months.

Yes, My husband and I run a small company out of our home. Writing for me is a secondary occupation but since it also how I relax, it works out great for me. I write because I love it.

“The Wraith of Carter’s Mill ; The Curse of the Carter Women,” is a story about the sins of fathers being revisited upon the children.

Books, Authors and Artists published “The Wraith of Carter’s Mill”.

It takes me about six months from start to finish.

I am currently writing my next novel and hope to release it in the Spring of 2016.

“The Wraith of Carter’s Mill”, is a mixture of historical fiction and paranormal/suspense.

I am fascinated with southern culture and the rich superstitious history of the south.

My favorite character is Ms. Ethel. She very much reminds me of an older lady I knew as a child.

I have been writing since high school. I was inspired and encouraged to write by the best English Lit teacher in the world. . . Ms. Pamela Hatch.

I have a comfy chair and I have my writing space set up in a room on the back of the house, as far away from the phone and televisions as I can get!

I do, I appreciate all comments, good and bad.

Sometimes I have a title right away but I usually end up changing it as the story unfolds.

C. Evenfall grew up on the Crystal Coast of North Carolina. In many ways, her community was isolated from the outside world, and time simply stood still. The old ways of “doing things” surrounded her, and she was both fascinated by the rich history and influenced by it.

As with any such place, the area was rich with ghost lore and old tales of “people done wrong.”

C. Evenfall, a child seen and not heard, hovered as close as she dared, listening to the old stories when the adults got together talking about old times. She also spent many nights with the sheet pulled over her head in childish fright.

A paranormal encounter when she was just six years old, experienced by two other people at the same time, convinced her that ghosts really did exist. C. Evenfall has been seeking answers ever since. Her fascination with the unexplainable, coupled with her love of history and southern culture and the role women play in both, have inspired her to write The Wraith of Carter’s Mill, a series of novellas. Each inspired by tales from her childhood and the family members who passed them down.

Life has taken her many places, but today, C. Evenfall resides with her husband in the same fishing village where she grew up. Together they enjoy hiking, camping, gardening and the outdoors in general. She forgives his skeptics’ dismissal of things that go bump in the night and loves him dearly in spite of it. They complement one another perfectly.