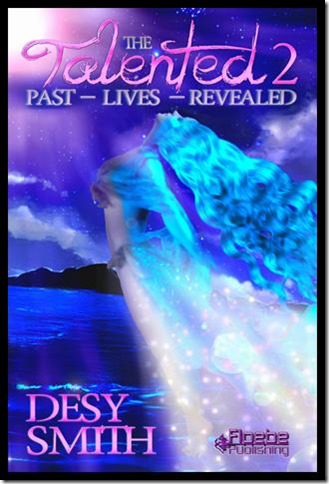 Carmel’s time at the H.O.T hasn’t been all that pleasant. She’s gotten drugged, captured, and had to endure her painful change. When Carmel finally starts to enjoy her life at the H.O.T with her friends and her boyfriend Devon; Queen Ice, her annoying past life, contacts her. Queen Ice not only tells her about the impending battle between the good angels and the evil angels, she also continues to pop up in Carmel’s mind, showing her images from her life in the past. Now, Carmel, her friends along with her boyfriend, race to find a sword that they believe will give them leverage in the battle to come.

Unfortunately it isn’t as easy as it seems. There are others who are aware of the sword, and they’ll do anything to retrieve it before Carmel does. In addition, Carmel can’t use her Water or Ice Talent to help in the battle and she doesn’t know why! On top of that, there’s one or more people in Carmel's group who aren’t whom they say they are. Can Carmel find the sword? Will she be able to figure out why her Talents aren’t working? Can she discover who in the group is lying to her and the others about who they really are?

Be sure to read the second series of The Talented by Author Desy Smith to see how the story unfolds!

Available at Amazon and DesySmith.wix.com

We’re a couple of streets down from the museum, waiting on Devon to issue instructions. Earlier, as we laid in bed, I brought up Ms. Platinum Blonde from the airport. Her name is Tray and as I thought, it wasn’t anything serious. He did sleep with her before he met me and that was it. It was just about sex, and honestly, that didn’t bother me. I knew Devon had a life before he met me. I would be dumb to think otherwise.

“Okay, so here’s the plan, we go in teams of two.” Devon says inside the car outside the museum. I know I should have been overjoyed because this is my first mission with them. But I’m not. My lower back was bothering me. But I endure the pain, because I knew if Devon found out, I would be left behind, again. “Mel and Ricky are one team, and Flora.” He says her name with disgust. “And I are another team.”

“Flora, go with Devon. This will give you two time to bond with each other.” I add. I look at Ricky who is nodding his head in agreement.

“I don’t want to bond with him!” Flora yells. Ricky gently grabs her and they both get out the car and start talking, well, arguing.

“I told you she wouldn’t want to do it.” Devon says. I roll my eyes.

“You weren’t very nice about it.”

“Really? I thought I was.” Liar. Flora and Ricky open the car door.

“Okay, we’re ready, and Flora said she would be honored to be in your company.” Ricky says.

“You’re pushing it.” Flora replies with her arms cross, glaring at Devon.

We make our way toward the back entrance of the museum, where two dead police officers are holding the door open.

“Someone’s already here.” Devon says and Flora gives him a ‘duh’ look. He and Ricky move them both inside the door and close it. I notice the alarm on the right side of the door, smoking.

“The alarm system has been fried, which prevents the alarm from being triggered.” He tells us. “Okay, let’s go ahead and split up. Flora and I will take downstairs, Mel and Ricky will take the second floor and we will meet on the third floor, and divide that equally.” He turns his attention to Ricky. “If anything happens to Carmel, do know I will take your life.” Ricky sighs while I roll my eyes. There he goes again, threatening to kill people.

The museum is really creepy at night without any lighting and people. I and Ricky’s first stop is the Egyptian room.

“Did the Egyptians exist when the angels were here?” I question. Even though my back is killing me, and I want to soak in a bathtub, eating eggs with syrup, I am joyous because I have alone time with Ricky, which means I can grill him.

“Yes, remember the angels came down when Adam and Eve were placed on earth.” Oh yeah. I start to recall the story Flora told me.

“Your great times 10 grandfather knows a lot about the Angels.” I say as I pick up another vase and look inside before tossing it in the ‘don’t need’ pile. “I think it’s amazing how the stories of Queen Ice were passed down from child to child, but maybe they’re a little less than factual.”

“I don’t believe I understand what you’re implying.” I turn to look at him, and try to make out his facial expression but couldn’t because of the moonlight being the only lighting in the museum.

“I’m just saying people tell stories to each other and sometimes they add a little extra in. Who’s to say that didn’t happen?” I’m purposely trying to anger him, hoping his rage will make him spill his secret accidently.

“You’re acting like Devon now. Do you have something to say, or will you speak in riddles for the rest of the night?” Ricky states calmly, showing no signs of anger.

“Were you there, Ricky?” I ask, getting to the point, enough of the bull crap.

“There, as in I was an Angel in the Angel era?”

“That’s unlikely, I would be very old and senile.” Anything is possible, I say to myself, repeating what Ice told me weeks ago.

“Well, I don’t believe we age like humans. Actually, I think we can be century’s old and still look young.” Like Ricky, I thought. “Time doesn’t matter to us.” Suddenly, a light bulb goes off in my mind. I make my way to the wall where a directory is hung. I notice a room on the third floor dedicated to artifacts with no accurate time. Otherwise known as the Timeless room. The vase has to be in there.

“I think I figured it out, Ricky.”

“What, how angels age?” I shake my head.

“Nope, I think I know where the vase is at.” I run out the door, ignoring Ricky as he calls my name, and up the stairs. I walk down the hall until I come upon a cracked door with the words Timeless printed in white calligraphy on the door. I found it.

I’m sitting on the floor, looking through another row of blue vases. I was starting to understand how Devon felt, this whole thing is repetitive and annoying. I want to find the vase and be done with this part of the mission. I keep asking Ice if she sees the vase, but of course, when I need her the most, she ignores me.

I get ready to give up, until a particular vase catches my attention in the moonlight, almost like God was putting a spotlight on it. The vase is round, and blue with snow white flames from the bottom to top. It’s really beautiful. I go to grab it and turn it upside down. On the bottom there is an engraving.

“Engraved it shall say To Queen, From Flame.” Ice says. Look who finally decides to make an appearance. I look at the inscription and it says just that.

Character Bio: He’s 5’10 with green eyes, and short black hair. His skin is golden due to his mixed heritage. He’s 20, and his Talents are Water, Earth, Air and Fire. Nonchalant he may appear to be, but in reality his true nature is kill now, deal with the consequences later. This rash judgement causes many people to hate and fear him; which he’s okay with. His enemies are as numerous as the stars in the sky. His love for his equal Carmel is uncontrollable; he would move mountains for her. Devon believes she sees the good in him and because of her, he knows he can become a better man. Devon would be ultimately satisfied if he and Carmel were the only two people in the whole wide world.

My worst quality is being awesome.

I possess all four talents: water, earth air and fire. I’m pretty much indestructible. My worst quality according to my girlfriend is my attitude.

I’m misunderstood, and that’s not my fault.

It wouldn’t be a secret if I told you.

My destiny, my future

To stay with Carmel forever.

Non-existence, if it were up to me, I wouldn’t wear any clothing.

You’ll have to read book three to find that out.

My idea of happiness is being with Carmel alone and forever, not having to deal with angels good or bad, and Flora’s nosy butt.

Right now I’m worried about Carmel finding out my secret.

I do not know if he could be counted as a living person, but Lucifer Morningstar.

You guys are asking a lot of question; I can’t answer without giving away the third book.

The monster of Frankenstein, as he was misunderstood and created so was I, and I can relate to that.

Good question, and no one. I tend to not admire humans.

How I was made.

Desiree “Desy” Smith was born and raised in Dallas, Texas. As an avid reader, Desy read several books until she ran out of things to read. Having nothing else to read, at the age of thirteen, she decided to write her own book. Her love for reading soon turned into a passion for writing. She self-published her first book, The Talented, under Floebe Publishing, which she started to give a voice to new and aspiring authors. Desy writes to inspire and to provide an escape for anyone who wants to live in a fantasy world without worrying about the challenges of everyday life. The Talented is part one of a five part series, with the second installment arriving finally here. Currently, Desy is hard at work on her third novel, Supernatural Resident Advisor with an expected release date of October 2015. Desy’s genre of choice is fantasy romance fiction. Aside from reading and writing Desy enjoys various types of food, especially dessert. When she’s not reading she can probably be found eating a cupcake or two.