Unlike her famous older brother Maxon, Princess Portia isn't known for killing demons or attracting admirers. The reason why is simple: a spell was cast on Portia, and the magic has marked her to one day transform into a dreaded Void demon. To fight this horrible fate, Portia’s spent her life hiding in libraries and learning magic. But when the Void demons threaten to destroy all the after-realms—and the handsome dragon Emperor Tempest offers his help—then Portia suspects that her future holds more than just a demonic metamorphosis. Fate is calling the bookworm princess onto the battlefield, and it’s a fight against both deadly enemies and her heart’s desires.

Chapter One
I am so late.
My heart beats at double speed while I rush up the staircase to the Ryder mansion. After pulling open the fancy wooden door, I step inside a large and empty foyer. Well, it’s almost empty.
The President of Purgatory is waiting for me. Not good.
Even worse, her mouth is pressed into a thin and frustrated line. No question why she’s unhappy. My lecture on Magic Across The After-Realms should’ve started twenty minutes ago.
“Portia, you’re finally here,” she sighs. “We were getting frantic.”
The President’s known for being tough on crime, graft, and well, everything really. But she’s also my grandmother. When it comes to family, Gram’s a softie who worries like crazy. I should know, being a softie myself. I give her a quick peck on the cheek. “So sorry, Gram. I got caught up.”
Gram’s tail sways warily over her right shoulder. No shock, there. Every quasi-demon in Purgatory has a tail. Gram’s variety is long and black with an arrowhead-shaped end and a mind of its own. Currently, that mind totally suspects that I’m up to something.
Good suspicion, actually.
“What are you working on this time?” asks Gram. “Is it dangerous magic? Please tell me you’re being safe.”
“No, it’s not dangerous at all,” I say.
Which isn’t entirely true.
My cheeks redden with guilt, but I can’t exactly admit that I was up all night trying to track Void demons by casting spells with an enchanted canopic jar. It’s super-tricky stuff. I could’ve ended up with a Void demon in my living room, and I’m not what you call battle-hardy. 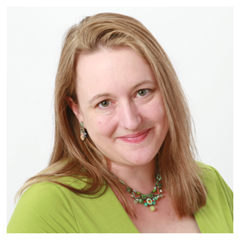 Christina graduated from Syracuse University’s Newhouse School with BA’s in English along with Television, Radio, and Film Production. An avowed girl geek, Christina loves creating immersive fantasy worlds with action, adventure, romance, and kick-ass female protagonists. As part of her work in Ink Monster, Christina has co-developed the ‘Heroine’s Journey,’ a blueprint for telling female myths inspired by the work of Joseph Campbell. She lives in Newton, MA with her husband, son, and golden retriever Ruby.

1. When did you first consider yourself a “writer”?

I don’t know that I’ve ever accepted that title. I consider myself a storyteller and an entertainer. For me, the ‘writer with a capital W’ falls in the same category as ‘literature with a capital L.’ I work my ass off on everything I create, but there’s a whole writing world out there that I still don’t totally feel tethered to.

2. How long did it take to get your first book published?

My first book was published with an Indie publisher out of the state of Washington. I’m an entrepreneur, and even their indie style made me give up too much control for my taste! It wasn’t until years later that I felt ready to make another go of it with Ink Monster and my current partner in crime, Aileen Latcham! Owning my own show has been a much better fit for me!

3. Do you do another job except for writing and can you tell us more about it?

My day job is in software marketing for a company called Zerto, which makes disaster recovery software. I’ve spent twenty years selling electronic files through partners, and that experience has directly played over into the business side of founding Ink Monster publishing. I’ve been able to bring over a lot of my high-tech experience to that side of the house. It’s one of the reasons why Ink Monster focuses solely on ebooks.

4. What is the name of your latest book, and if you had to summarize it in less than 20 words what would you say?

Portia. It’s the story of a girl, a quest, and a hot dragon Emperor.

5. Who is your publisher? Or do you self-publish?

Ink Monster has moved more than a half-million ebooks in two years. Not sure when/if we’ve crossed the line from being self-published to being an official publisher, but I’m not sure it matters so much, either. We’re having a ball and creating stories that people love. What else is there for a writer?

6. How long does it usually take you to write a book, from the original idea to finishing writing it?

Before I started Ink Monster, I’d say 2-3 years. It was tough! Now that I have my fellow writer monsters around me, it’s much easier. We work as a team to plot things out using a beat sheet methodology and are pretty rigorous throughout the process. Now, I run about six months.

7. What can we expect from you in the future? ie More books of the same genre? Books of a different genre?

I’m currently working on a new fantasy-romance series called Beholder. After that, I have a rotating schedule of paranormal romance, sci-fi romance, and fantasy romance worlds set up to go. I’m planned out through 2020. Lots of my ideas are here on my Pinterest boards.

8. What genre would you place your books into?

9. What made you decide to write that genre of book?

It writes me, if that makes any sense. Like I said, my stories go I my head 24-7. I write get them out on paper as soon as I can to make room for new ones.

10. Do you have a favorite character from your books? And why are they your favorite?

Right now, I am in serious love with the dragon Emperor Tempest from Portia. He showed up in the second book in the Angelbound series and wouldn’t get out of my head until I wrote his story. Hopefully, when you read the book, you’ll see why.

11. Do you have a certain routine you have for writing? ie You listen to music, sit in a certain chair?

I go to my favorite Starbucks and hit my favorite table (back corner.) The employees there know me and save my spot. After that, I turn on my headphones, crank my tunes, and write the shit out of whatever I need to get done. That’s where I am right now!

12. Do you read all the reviews of your book/books?

Every single one. My readers give phenomenal feedback and insights. You are a critical part of the team!

13. How do you come up with characters names and place names in your books?

Four words: work my ass off. I have a complex set of rules here:

I love/hate this part of writing. Sometimes I wish I could snap into an already-created world, but that loses some of the fun for me. I like to tweak our current world in some way and see how people react. For Angelbound, there’s the essential question: what if in the next life, they know as little as we do now?

14. Are character names and place names decided after their creation? Or do you pick a character/place name and then invent them?

I build out the names last. For example, the thrax demon fighters in Angelbound have a history where they come out of Roman times. So, Latin became the basis for all their naming structures. The Furor dragons were an offshoot of ancient Greece, so everything there is based on Greek naming. It goes on and on.

15. Do you decide on character traits (ie shy, quiet, tomboy girl) before writing the whole book or as you go along?

Oh, I decide what the characters are gong to be like, all right. Then, they kick my ass and tell me what they want to be. For example, I wanted Portia to be a playgirl at one point. She was having none of that bullshit. She wanted to be a bookworm and researcher, thank you very much. That’s all part of the fun!

16. Do you think books transfer to movies well? Which is you favorite/worst book to movie transfer?

I don’t know if transfer is the word. I studied screenwriting before I wrote my first book, and it’s a different kind of storytelling. There is so much you can convey with costume, set, tone of voice and so on that’s hard for a writer to get on a novel’s page. Meanwhile, books have the advantage of allowing us inside someone’s thoughts. In any case, my hands-down favorite adaptation of a book to a movie is Blade Runner. Ridley Scott added so much to the original work, Do Androids Dream of Electric Sheep by Philip K Dick.

A burger, medium-rare with cheddar and fries. Yum!

Posted by authorkarenswart at 9:58 AM