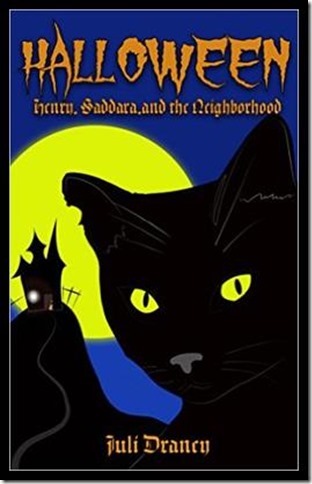 Halloween: Henry, Saddara and the Neighborhood

Looking for another fun Halloween story to add to your repertoire? "Halloween: Henry, Saddara and the Neighborhood" is a fictional chapter book for children of all ages! The story depicts the colorful scenes of a legendary Halloween night through the eyes of Henry, a rugged, but sophisticated black cat. The story takes the reader to the quaint town of Greenwood. Henry enjoys his human family and the sights in the town on Halloween, but ventures out into the foothills to his favorite place, the haunted Hostetler mansion.

Henry experiences many supernatural events on his adventure to the old mansion near the woods, including interactions with and sightings of witches, werewolves, musical vampires, ghosts, goblins, and zombies. Henry has a dear friend who inhabits the Hostetler mansion, the ghost of a little girl named Saddara. Saddara's touching story is told in this tale and receives a powerful resolution. Henry somehow escapes this incredible adventure with his life, a scarred ear and wise lessons to impart.

“Halloween: Henry, Saddara and the Neighborhood” is Halloween fun with beauty and wisdom brewed in!

This book is also a Rock Opera Dance Musical!

“Do you take one lump of sugar or two? Or seven?” asked little Saddara. Then she erupted into a high pitched giggle.

“I’ll take seven sugars and I would like a mouse on the side,” I answered as we both laughed and sighed. Our pretend tea parties in the rose garden of the old mansion were delightful!

“Well, I guess it’s time for me to go now,” said Saddara. “I don’t know when mother and father and the boys will be here, but I will wait. I am sure they are coming!” With a pet on my head, she would fade away back into her bedroom. I would then make my way home through the lovely, wooded foothills. Those were fun times I had with Saddara. I’ll tell you all about her later on.

I’m Henry, the beloved cat of the Rodriguez-Haskell family. I’m a black cat and a Tom. That and my scruffy, torn ear add to my irresistible charm. I live in the quaint town of Greenwood, named for its beautiful, green foothills. I’m a mix of ruffian and spoiled house cat (though I hate to admit the latter). I’ve garnered quite a bit of street smarts from my nightly cat adventures. I know every back alley and criminal joint in Greenwood, as well as the swanky, uptown parts. My family allows me to roam at night wherever I please, thanks to the cat door they installed. It’s nice to have my true nature recognized. We cats are complex characters, just like humans. I can enjoy a Shakespearean sonnet as well as dumpster diving for a delicious, discarded meal. By the way, you humans should try scavenging more. You’re missing out on all the fun!

I certainly didn’t receive my scruffy, torn ear from a human. I got it from a zombie in an epic battle on a legendary Halloween night. Halloween is my very favorite night of the year as it’s a night when my irresistible charms seem to frighten people out of their mind. If you have more time, I’ll share with you the story of one of the most incredible nights of my life - a night when my fierce scrappiness and sharp intellect were fully used. I must say, I’ve had many such nights. After all, I’m a cat.

The total count was eight. They were quietly walking and walking, slowly, without expression around the beautiful garden veranda near the cemetery and the front lawn of the mansion. They had shiny, groomed black hair that glistened in the moonlight, and a pale hue to their skin in cool tones. Some had white streaks blazing through their black hair. Their garments were impeccably beautiful. They wore woolen, pin-striped suits, with the finest tailoring I had ever seen. Long black capes draped from their necks around suit vests and slacks. They wore red roses on their lapels. Their shoes shone in the night like their hair.

After a bit of their calm pacing, I saw one go back to his coffin and produce a chair, then of all things, a beautiful cello and bow.

Excerpt from “The Return”

Exhausted, I walked over right in front of the guitar god zombie, still playing his guitar ferociously. I could still hear the howls of the werewolves and the cackle of the witches in the forest. Catrina and the vampires had fused their music with the zombies forming a type of Halloween heavy metal, funk tango dirge which was truly exhilarating. This was musical fusion as I had never heard before! It was like a rock concert in heaven and hell at the same time. The haunting yet extremely alive music, the cackling, the howling…it all climaxed into a great musical sound that seemed to summon the very sky and enter beyond time. It was totally overwhelming and reached an almost unbearable level of exhilaration. Then, suddenly it all stopped - dead silent. The vampires ceased their playing and dancing. Catrina and her partner stopped mid-turn.

Juli is a freelance musician, piano teacher and author living in Boise, Idaho. She has accompanied professional dance for many years. She was inspired to write her book in order to compose a Halloween ballet, which turned into a “Rock Opera Dance Musical”. She enjoys teaching, performing, writing, composing, and hanging with her daughter and two dachshunds.