Kasadya Hellhound Series - Get the entire series for just 99c! #YA #Giveaway

Get the entire series for just 99c! 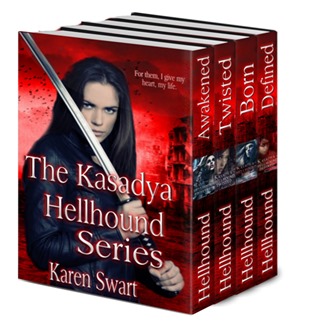 on sale for a limited time.
Amazon 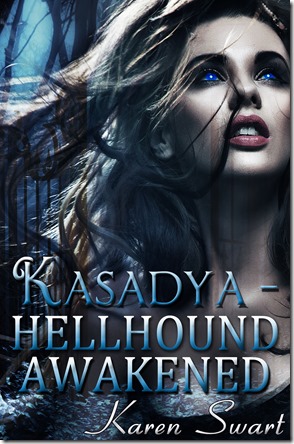 Blurb -
In a constant battle between good and evil, evil is dominating the battlefield and leading mankind to its destruction. With our Creator's intervention, a creature destined to conquer and destroy is created. He gives mankind hellhounds to fight back and reclaim freedom.
Join seventeen year old Kasadya Levourne as she fights against evil to protect us. With each step, she faces destruction, and yet she has the talent to give it back tenfold. Stubborn and hard-headed she makes her mark in the Fallen world and starts a battle none can escape. Not even her trainer, the very attractive Chax de Luca, was prepared for her presence.
Will evil prevail? Or will Kas and her Fallen friends succeed in protecting us against it? Hold on to your seats, this is going to be one hell of a ride.

Special Note:
The Kasadya Series is read back to back, book 1- 3 ends with a cliff hanger.
Now Free on all platforms!
Book Links-
Amazon / Goodreads / Smashwords / Barnes and Noble 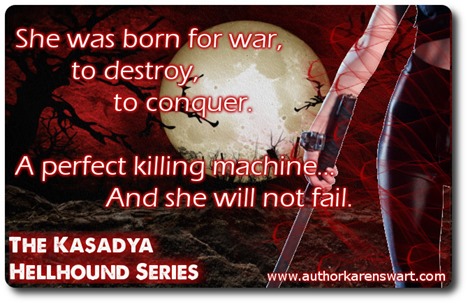 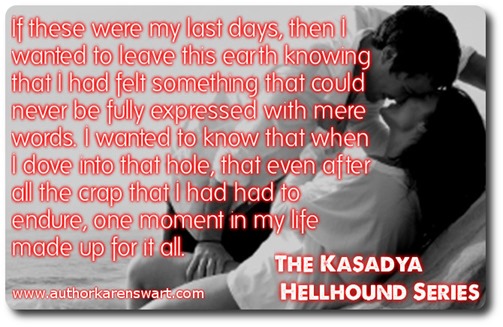 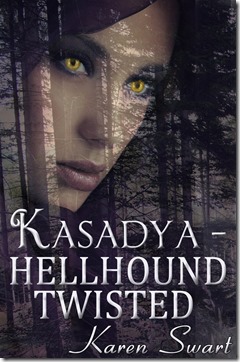 
Blurb -
She fought against all odds and became the warrior she was meant to be … or so she thought. In a world where the rules have changed, can she embrace her destiny and become the hellhound she was meant to be?
Kasadya is back in Exsilium and finds her world a little different. Her half-breed fallen friends join her, and they are ordered to complete their apprentice training in order to obtain the right to be guardians. She must learn that her own fate cannot be denied and that others are set to follow. But most of all, she must learn that to trust is the greatest battle of all.
The tables are turned and Kasadya is put to the test. Will she be able to prevent her own death, or that of a friend? Or will her actions call forth the destruction of Earth and Exsilium?
For a Phoenix to rise, it must first die. —Chax De Luca 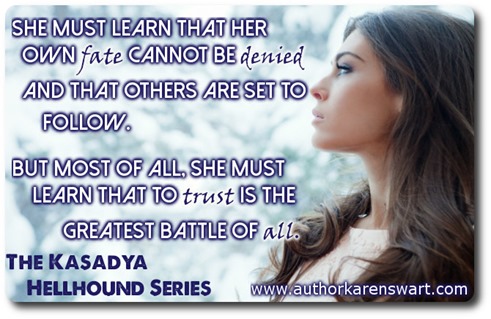 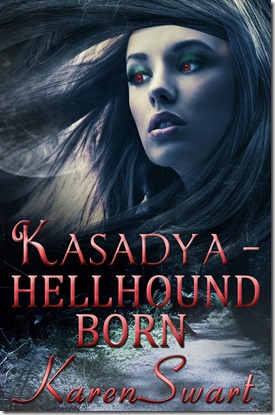 
Blurb -
In a world filled with evil, the Fallen prepare for the ultimate battle against the demon world!
Kasadya is ordered to unleash her crazed born transformation to complete her divinity. But there is a chance that her born will be uncontrollable, and she will be destroyed. There is just one person that can save her; her charm, her destined mate. Left without a choice, she must surrender, and place her life in his hands.
In a race against time, the Fallen must stand together and fight the evil threatening to invade earth. If her divinity was in reach, victory would be theirs. That is until she starts having visions of the final battle, and her true destiny is revealed. She just found her love and place in the Fallen world; will she be able, and willing, to sacrifice it all? 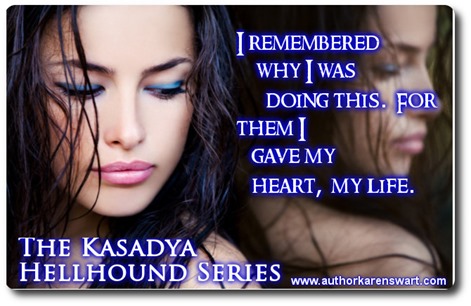 Excerpt -
“Kasadya, don't do this to me,” Chax spoke, using Corra.
I stopped completely and looked at him. Reaching for my necklace, I held it.
“I am so sorry, Chax. This is the only way; we can’t win any other way. I know; I have seen the end too many times,” I replied.
His face fell even more and he looked around, searching for a way out.
“I want to thank you... for being there for me. For searching for me when I went missing. For enduring all of my crap. I am sorry I messed up so many times. But not this time; this I promise. But most of all, thank you for loving me.” Even my mental voice broke down on the last part.
Chax started to scream and pound at the invisible wall, while others joined him. I looked at Nanini, shocked that she couldn’t get out.
“Take care of Max for me,” I sent to her.
Tears formed and ran down her cheeks, but she nodded.
“Kas, let us help you!” Lotan yelled. My friends, my family were still trying to save me. Tears ran down my own face now.
“I love all of you. Thank you for always being there for me.” Finally my mental voice began to a sob.
I turned away, afraid that the sight of them would stop me.
“Kasadya! Don’t do this to me. I beg you!” Chax yelled at me.
Demons were closing in around me, but my heart was so broken I just let the tears and heartache spill out of me.
“I am so sorry, Chax. Forgive me.” With that, I stormed forward.
I used my g-force punches to clear the masses out of my way. When that stopped working, I started shifting. Demons grabbed at me and some got in a slice or two. But I wasn't stopping.
I saw Ballen trying to flee from me. He thought I was heading for him. Good. I needed him on the other side when I blew it up. Using my wings for momentum, I sent a massive g-force punch into the horde that remained between me and my target. They flew backwards, clearing the way for me to advance. I swiped at a few too close and took their heads. Blood sprayed all over me. Searching for the hole to make sure I was heading in the right direction, I saw the shoulders and arms of something freaking big, already beginning to breach.
I need to move faster!
I lifted up with my wings. They were tired, but I had no other option. Now I had the flying demons to contend with. We fought and sliced and I sent a few down to earth without a head. At last, I was advancing on the hole. Pain shot through my left wing and I tumbled to the ground, hitting hard. At the last moment I made sure that the front of my body hit the ground and not the back. Demons jumped me all at once. Ballen was yelling at them to stop me. I used everything I had left and flung out with my wings and arms. They went flying and just in front of me was the hole with the devil stuck in it. Ballen was standing at the entrance watching me, his face a mask of shock.
With a deep breath, I reached for the pouch and took hold of the balls. Now armed and ready, I just had a few feet to go. I stormed through the demons, not caring if they sliced me open. I wasn't stopping for a fight anymore. I held the balls to my chest, sealing them from any other impact. Then, finally, I was at the entrance of the hole. With the last of my strength, I leaped into the air and went flying straight for it.
There were many things that go through your mind that moment before you die. I remembered my first step into Exsilium. Meeting Lada and Nanini. Meeting Chax and hating my first day. I remembered our fun at the beach, the Hellhouse and the grub spot. Seeing Lada and Lotan kissing for the first time. Meeting Max and Ryan, and then all of the rest. My heart no longer troubled by Kali or Seth or all the others who had betrayed me. I remembered finding Chax and the Fallen again. Seeing my parents again. So many memories bombarded me at that last moment. I remembered my day and night with Chax, and how it felt to be loved.
“I love you,” I sent a final message to him.
He was still screaming my name, begging for me to stop.
I remembered why I was doing this. For them I gave my heart, my life. Ballen's shocked face was in front of me, right in my path. Just when I reached him, I dropped the balls and slammed into him. 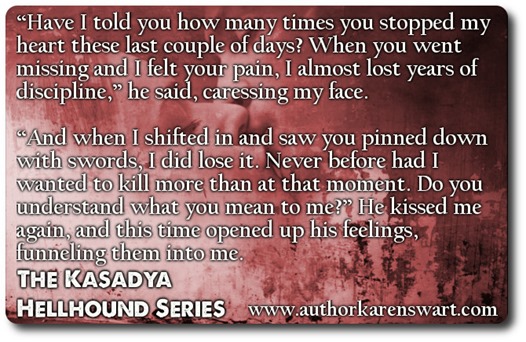 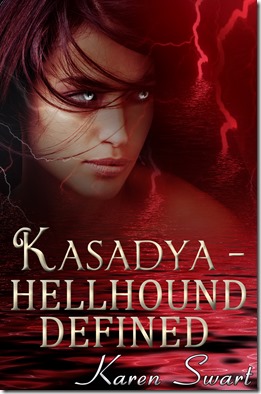 
Blurb -
For centuries his only reason for existence was to destroy evil. But when he finally found his mate, that all changed for the deadly Chax De Luca. When the hellhound Kasadya captured his heart, he surrended it to her, thinking he’d finally found what he’d been looking for. Little did he know that his mate would sacrifice herself to save them all.
His fury is legend. His wrath, merciless. His love for his mate, undeniable. He’s going to hell to retrieve his heart, and if that means that he must destroy hell itself, then so be it.
Kasadya awakes to a world in peril, her mate forever changed, and a war filled with evil creatures intending to enter Earth’s realm and destroy all that she holds dear. Can she complete her divinity in time to save her loved ones and mankind? Will she have to choose? Or will all be lost in the final battle?
The final battle is here, and with it, secrets are revealed and worlds are changed forever. 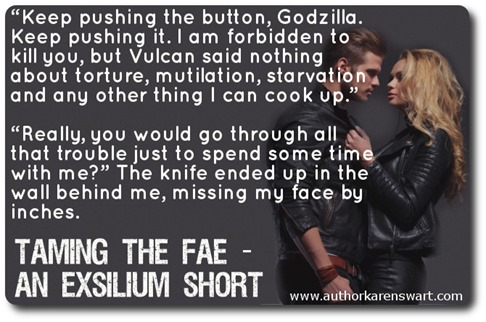 Get the short story Taming The Fae free on all platforms!
Giveaway-
a Rafflecopter giveaway
About the Author -

I am a complete book addict, and really proud of it. My entire world is made of books. From reading to writing to blogging to helping other authors. A day without my world of books would be impossible. I am a mother of three, two boys and a little princess. Happily married for 10 years with my high school sweetheart. I live in South Africa, just on the rims of the Kalahari Desert in a small town with one shop and friendly faces.