Book Blast, Giveaway & Interview: Under His Skin by One Stacey O’Neale @StaceyONeale 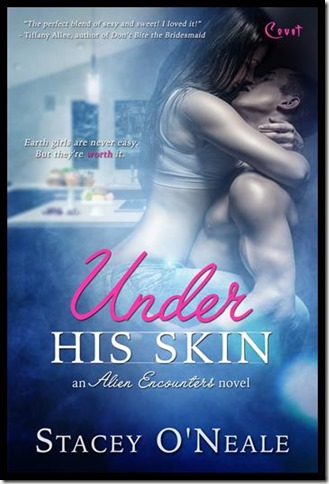 Bakery owner Annabelle Sparks’ business is booming ever since she won reality TV's Cupcake Wars. The one thing deflating her happy soufflé? The extremely sexy Kaden Chance only sees her as a best friend–and Annabelle wants so much more. After waiting a year for him recognize their chemistry, she’s giving up and dating other people.

What she doesn't know is Kaden's heart doesn't actually beat. He's not human. Heck, he's not even from Earth. To retain his intergalactic immunity, no one can ever know he is an extraterrestrial. But when Annabelle starts dating, something strange happens to Kaden's unmoved heart: it begins to beat. Now he faces an impossible choice—tell Annabelle the truth and be deported–or lose his last chance at love.

Camden shrugged his shoulders. “Don’t be so hard on yourself. If she is your mate, it’s nothing you did on your own. It would’ve happened regardless.” The phone rang. Kaden stood, but Camden motioned for him to sit back down. “I’ll take care of it.” He headed toward their family room in the front of the house.

“There’s really no need to panic at this point,” Hayden said, opening the refrigerator, pausing to check out the contents, finally settling on lunch meat and cheese. “I suggest you act as if nothing has changed.”

Kaden thought about how he’d left things with Annabelle. There was no way they could go back to the way they were. The next time he saw her, she’d expect answers. She deserved answers. “I don’t see how that can happen.”

Hayden glanced up from the sandwich he was making. “Why is that?”

I had her halfway to an orgasm, then ran out of there without an explanation. “I left things a bit…awkward with her.”

Hayden turned his attention back to the triple-decker submarine he was building. “Do what you feel is best—I’m not concerned. You’ve never given me a reason to doubt your decisions before. Just remember to pay attention to any variances in your behavior. If you sense any change, let us know immediately.”

Camden came back into the room, still clutching the portable phone. “I think we have a problem.”

Camden pointed over his shoulder. “Annabelle is on her way here. She’s in a cab at the front gate.”

“Don’t let her in.” He paused for a second. Not allowing her in would only escalate the situation. There had to be a better answer. “Tell her I’m not here.”

Camden rubbed the back of his neck. “Too late, bro. Barney buzzed her in.”

What was the point of living in this secluded neighborhood if the security team let in anyone who showed up at the gate? He made a mental note to have a long talk with Barney’s supervisor in the morning. “Why would he do that?”

Hayden chuckled. “A pretty human showing up in the middle of the night isn’t exactly newsworthy around here. Barney probably assumed she was here for Camden.” Camden winked at Hayden.

Was this a regular occurrence when he wasn’t home? “How many humans have you brought back to this house?” Kaden asked, irritation filling his tone. “Do you have no respect for any of the rules we’ve set?”

Camden raised an eyebrow. “Hey, glass house, now really isn’t the time for you to preach to me about the rules.” He made his way toward the staircase with his chest puffed out like a proud canary. “Sounds like you have plenty of explaining to do, so I’ll leave you to handle that.”

Hayden placed his sandwich on a paper plate. “I’m going to eat my snack in my office.” As he was leaving the room he glanced over his shoulder. “Be sure to give the human my regards.”

If you could cast an actor to play you in a movie, who would you pick?

It would be Tyler Hoechlin.

I’m very loyal and fiercely protective when it comes to the people I love. My worst quality is that I can be a little too over-protective.

I wish I could be honest about what I am without scaring people.

I’m an alien from another planet. That’s a pretty big one.

Single, but not by choice.

Relaxed. I’m a jeans and t-shirt kind of guy.

Leaving my planet, and starting my life over again as a human.

I don’t have what I want most.

Not telling Annabelle the truth.

Who do you most admire?

I wish I was a normal human so I could have what I want most in this world. Award-winning author, Stacey O'Neale, lives in Annapolis, Maryland. When she's not writing, she spends her time fangirling over books, blogging, watching fantasy television shows, cheering for the Baltimore Ravens, and hanging out with her husband and daughter.

Posted by authorkarenswart at 6:42 PM