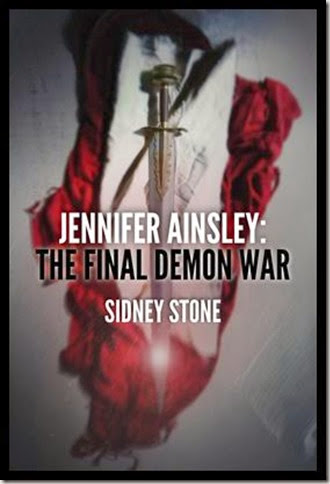 Demons are preparing to launch the Final War to destroy humanity.

Can one young woman wielding the Sword of Jesus ensure our survival and redemption?

Will she lose both her love and her soul in the process?

Available at Amazon in Paperback and Kindle formats

Jonathon Tait, whose demon-enhanced 170-year-old life has helped make him the richest man in the world, secretly renounces his alliance with demons in order to save his twins and redeem himself in the eyes of the two women he loved and lost. Jonathon has visions that his beautiful college-aged adopted daughter, Jennifer Ainsley, may be the key to humanity's survival and works with an underground movement to fight back against both the demons and the human leadership that is guiding our civilization towards total annihilation.

Can Jennifer wield the Sword of Jesus to fulfill her destiny even as the planet hurtles towards its destruction? Is she mankind's only hope and can Jennifer save everyone that she loves; including her destined soul mate Andrew Walker, or are we all doomed?

Jennifer Ainsley: The Final Demon War is a gripping, fast-paced fantasy/horror novel grounded in the contemporary world. The characters are extremely likable and engaging, and a great deal of humor is successfully incorporated into the book, despite its often grim and macabre themes. There are several action packed tour-de-force chapters including “Scenes from the End” and “Kasey and Tracey’s Amazing Adventure”.

The book deftly tackles issues of greed, humanity's neglect for its weakest members, the race for power among individuals and nations, and the ability of love and courage to transcend personal weaknesses. It is a tale that combines horror and fantasy to tell a story of love, loss, sacrifice and redemption. It is the first chapter of an exciting new trilogy that deserves to find a wider audience.

Heather couldn’t believe she was going to die in front of her peacefully sleeping twins, who were oblivious to the unspeakable acts occurring in their nursery. These infants, this life, were all she had wanted, and in those lonely nights before sleep overtook her, she admitted to herself that she had been groomed for this since birth. She had been groomed to be a beautiful, nurturing wife to a wealthy and powerful man and she had been groomed to care for his children and teach them to take their rightful place in the world while she also maintained this lovely home—with a slew of maids, servants, and other staff of course. She threw the best dinner parties and had a special banquet hall included in the new Napa Valley estate just for that purpose. She knew all the right people to invite, and they raised all the right money for all the right charities.

Yet here she was in midair, swaying back and forth, seeing herself reflected in the rectangular Craftsman-style floor mirror she personally had picked out for the nursery. The demon Palvakia held Heather by her strawberry-blonde hair, a mane her husband Jonathon Tait called “gorgeously luxurious,” while her lithe and toned, almost split-in-two body, spilled her blood and guts onto the new Berber carpet (a lovely light blue she also had personally picked out for the nursery). How important Heather had thought every design detail of this room was. She had placed so much importance on the mundane materials that now meant nothing. She was escaping into the blackness now, the dark abyss whose passage she hoped ended with a consummating light. Was there light beyond death and beyond this horror?

It was insane, Heather thought, that her husband, the man she loved and admired, was watching this scene unfold with an expressionless face as Mordock, a repulsive and despised demon, stood next to him. Mordock was in human form right now, unlike the demon who had torn her in half, but Heather still felt the evil lurking underneath. She had tried to banish Mordock from their lives and had pleaded with her husband to stand up to him. Yet Jonathon had done nothing to remove him from their lives or to stop Mordock from carrying out her murder. If there was a light at the end, how could the Keeper of Light cause this to happen or not prevent it in the first place?

And what of the twins? Alexander and Sophia were so beautiful and full of life, with old-soul eyes, even as infants. My lovely babies, Heather thought with her last bit of consciousness. Who will keep you from harm? Can your father somehow be your guardian angel? Will he succeed with you where he failed with me? The darkness with the light behind it is approaching. Will I see you in heaven? How long will I have to wait? Hopefully a long, long time…

Heather took her last breaths just as Palvakia began to devour her. To her horror, though, death did not come instantaneously. A morbid trick of the demons is to keep their victims on the cusp of dying so they can witness themselves being eaten. Heather couldn’t even scream as the pain ripped through the ever-decreasing parts of her body.

When Palvakia was finished, not one ounce of the physical being that once had been Heather Tait was left in the room. Even the carpet was clean…and the twins continued to sleep peacefully. Sidney Stone is a hiker, deer whisperer and non-pretentious wine connoisseur. An addicted reviewer on Yelp, he is also creator of affordable housing (although technically he is homeless part-time), thinks The Replacements are the best band of the Eighties and loves to boost his LinkedIn count with people he doesn't know.

He lives in both Northern and Southern California while constantly traveling to Orange County to visit his son, who can now beat his father at ping pong and chess rather easily (and is charmingly arrogant while doing it). A graduate of UC Irvine and Pepperdine University, Sidney wishes he chose at least one university to attend that had a college football team to root for.

The first scene Sidney thought of for Jennifer Ainsley: The Final Demon War included a rather large massacre (take that for what it is worth). However, inspired by the works of Stephen King, Dean Koontz and Clive Barker; the book's violence is offset by dark humor and deep human emotion just like in real life where Sidney's darkness is offset by creatively placed sarcasm and an overwrought romanticism. For example, while Jennifer Ainsley: The Final Demon War is a Fantasy-Horror novel, Sidney also still tears up at the end of both Field of Dreams and An Officer and a Gentleman.