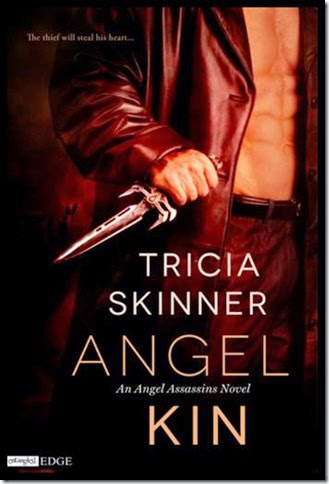 Tagline: The thief will steal his heart...

While channeling Robin Hood’s “steal from the rich and give to the poor” attitude at a local politician’s house, ex-con Katie Logan witnesses a forced suicide. Dirty or not, supernatural or not, he didn’t deserve to die, especially not by his own hand. But with her record, stepping forward as a witness isn’t an option. On the run from the police and the murderer, she turns to The Bound Ones for help.

When a beautiful woman comes to The Bound Ones, half-angel assassin Cain is immediately drawn to her. But when she fingers him as the killer, he can come to only one conclusion. The twin he thought was dead is very much alive…and trying to send him a message. Unfortunately, that message is: “You’re next.”

It’s a race against time as Cain fights to save the woman he’s falling in love with before his brother Abel destroys them both.

First, Cain checked the room’s double window and the flimsy front door, then threw the motel blanket on the brown carpet. He smoothed his hands across the sheets and lifted the mattress. He let it go and unrolled his blanket, tucking the corners.

“Should be fine now.”

Her mind felt miles away. “Will it be? Fine?”

He removed his jacket and pulled one of his guns from the holster. The magazine shot into his hand before he slammed it back. “As soon as I find Abel your life will go back to normal.”

Katie huffed a half laugh. Normal sounded like a dream. “I—”

Cain paused his movements. “You what?”

She snapped her gaze to his stony face. “Would it hurt to pretend I just showed some compassion for you? You could at least act like you’d considered my words.”

“Let’s analyze your sweet wish, little burglar. I’m an assassin, which translates to I kill people.” The half angel folded his arms and left no doubt about the arrogance on his face. “Sorry if the facts sting, but you can’t fight like I can. You can’t do what needs to be done.”

Infuriating, arrogant, and stubborn was not a good look on him. Katie mimicked his posture and crossed her arms. “Tell me, Mr. Super Assassin, are you sure those legendary fighting skills you claim to have will work when you’re face-to-face with Abel?”

“You think I’ll run from the fight?” A growl slipped through his gritted teeth.

“That’s not what I meant. I want to know if you can”— she raised her fingers in air quotes— “do what needs to be done, when your opponent is your own brother?”

Cain pressed his lips together, and she dove into the void left by his hesitation.

“Family is about love, but it’s also about a shitload of pain.” Katie expelled a slow breath. “When you face off with your twin, the end result will stay with you.”

Katie tossed her hands up. “Say you’re standing near Abel and he’s got a gun pointed at some poor schmuck’s head. What are you going to do? You’d have to decide whether or not your brother is more important, or that innocent life.”

He clawed his fingers through his hair. “I’d never allow him to harm a soul in my presence. I will stop my brother, but don’t tell me my only option is to kill him.”

“I hope it doesn’t come to that.” Exhausted, she sank onto the edge of the mattress. “I truly do.”

“Ridiculous,” he muttered under his breath.

She shot up from the bed, ready to tell him exactly where he could shove his tough act, but Cain’s hand caught her wrist. They stared into each other’s eyes, but the emotions passing over his face cranked her heartbeat.

“You should thank me for my honesty. An angel, even an impure abomination like me, could kill you before you could react. No more wishing you could help me. I don’t want to see you hurt.”

“So we’re clear, if I wasn’t dealing with mind-controlling giants, I could hold my own in a fight,” she said.

Cain’s expression darkened. “Could you? I wonder.”

The Nephilim brought her crashing down onto the mattress, and Katie yelped. She thrashed under his heavy weight.

“Overpowered by a body, not mind control,” he said as his breath fanned her skin. “Your nonassassin skills are sadly lacking.”

He pinned her wrists above her head, leaving her body flush against his. Katie wiggled and tugged, but Cain had the advantage of position and strength. She stopped her frantic movements. Only one option left—surprise.

She molded her lips over his, the pressure so heavy and intense she could only moan breathlessly into his mouth. The warmth of her tongue touched his, drawing her nerves guitar-string tight.

The grip on her wrists loosened, and Katie raised her hands until her fingers slid into the thickness of his hair. She arched her body and his wide palm cupped her back. Distracting Cain to throw him off took a back seat, replaced by instinctual need pounding deep within her belly and ricocheting between her legs.

I wanted to be a newspaper reporter, which is exactly what I became once I went to college. I spent four years as an intern at The Detroit News before they hired me just before graduation as a full-time reporter.

I was 19 or 20 when I first wrote something that made it into the newspaper. Talk about thrilling. My mom still keeps a "shrine" of my news clippings. She's very proud.

Hmm. I studied novel writing for about two years. My first contract was signed November 2012 and that book was published February 2013.

My day job is in higher education. Nice and vague, huh? ;)

Angel Kin is about a former thief who's forced to trust a half-angel assassin to protect her from his evil twin.

Entangled Publishing. I'm an author for the Edge imprint and I adore everyone there. It's a supportive, energetic and positive place to be. I don't currently self publish, but one day I will.

The process takes me about four months. I'm including time to get my critique partners to look at it, one or two beta readers, and then my agent.

In August, Angel Lover is scheduled for release. New hero and heroine, and it can be read as a stand alone. I've other projects I'm working on, one in the same genre and one that's not. I like stretching myself a bit.

Urban fantasy romance is the best description. The difference with that and paranormal romance is the romance is not driving the story. The hero and heroine in Angel Kin are not focused on their relationship. He's trying to save her life and she's trying to stay alive. The sexual tension develops from that.

I love angels and Nephilim (half-angel/half-human) stories. Urban fantasy allows the most freedom, in my opinion, to explore supernatural beings.

Tanis is the mentor of The Bound Ones, the team of Nephilim who are forced to serve Heaven as assassin. He was supposed to kill them as children, but he argued for their lives and won. Tanis is fully angel, but his wings are horribly scarred and he's emotionally not as cold as most angels. I love that he's complicated in many ways.

Not so much. If I'm told a blog review is coming, I'll check it out. I like to understand what a reader saw as a strength or weakness because it does help me get better. However, I don't seek out reviews or watch Goodreads or Amazon for new reviews. Those often don't have a review, only a rating, which makes it impossible to know what they loved or hated the book.

My Angel Assassins series is set in my old hometown of Detroit so I tend to use names of actual places I remember. Character names usually come from people I know. Katie Logan, the heroine in Angel Kin, is named for my sister-in-law Katie and her gorgeous little son Logan. Nestaron, one of the Nephilim, is the nickname of my good friend Jason. So if I know you and I like your name, you've been warned.

Not really. I tell the story in my head, but I don't focus on sticking hidden messages in it. A lot of readers, for example, dislike angel stories because they're preachy and religious. That hurts writers like me who never go that route. Angel Kin isn't religious in any sense.

I enjoy ebooks because I can get my hands on them quickly. I used to live in Barnes and Noble, but my life as a working woman, a wife and mother, and as an author makes trudging to the bookstore extremely difficult.

Super tough question because I tend to prefer movie soundtracks or epic soundtracks (the stuff you hear in movie trailers). Those creators include Immediate Music and X-Ray Dog.

One $25 gift card to Amazon, Barnes & Noble, or iTunes. Not open to international entries. 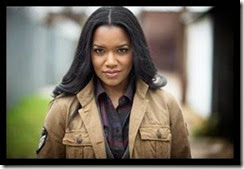 Tricia Skinner writes urban fantasy with twist of passion. She’s a former journalist who discovered her inspiration to write fiction as an escape from “real life.” Her reading tastes include fantasy (and its subgenres), paranormal, sci-fi, and history.

When she’s not writing, Tricia is a newbie “green” practitioner, fitness procrastinator, and a technology geek. Her family includes a patient husband, a demigod son, and two Great Danes. She’s active in several writing communities and enjoys interacting with readers.