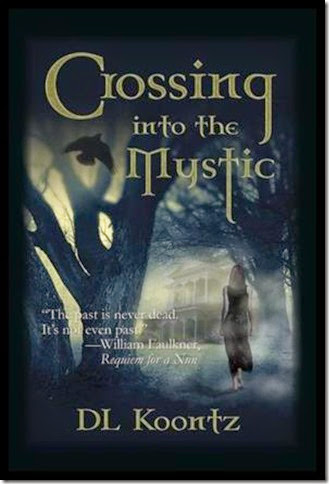 Crossing Into the Mystic:

Book One of a Trilogy

Three years after losing her family in a car crash, Grace MacKenna is set to inherit her stepfather's ancestral estate among the mountains of West Virginia. Seeking solace and healing, Grace discovers the ghost of William Kavanaugh, a dashing Civil War captain in Virginia s 17th Infantry, haunts the property. When William charms Grace into investigating the mystery that led to his death a hundred and fifty years ago, she finds herself drawn into a world of chivalry and honor, but also deception with secrets too dark to speak aloud.

Meanwhile, Clay Baxter, home from service in Afghanistan, fights his own demons and ghosts. When Clay senses Grace falling deeper into the realm of the dead, he seeks to pull her back. But is he too late?

Torn between her love for two mysterious young men - one living and one dead - Grace stands in the shadows of the Antietam Battlefield with a choice: one that could leave Grace lost forever, "crossing into the Mystic."

The story is complex and unexpected and I enjoyed the twists of plot. by Felicia Bowen Bridges

I kept going back and reading a sentence, a paragraph, some of the time the whole page.~ Tricia Scoggins

Character Bio: I’m 16, but folks say I act 40. Whatever. I grew up in Massachusetts. Lost my family (mother, step-dad and sister) at age 13, and had to move in with my Aunt Tish, my mother’s sister, in Boston.  That began three years of misery. Finally, at age 16, I saw my window of escape and moved to West Virginia, into a secluded mountainous (and purportedly haunted) estate (aka Crossings), that I inherited from my step-father. Turns out, I didn’t know as much about him as I thought I did.  It’s at Crossings that I learn about my ability to communicate with ghosts.

Here I am, leaving Boston. But you could see me in action in the book trailer: https://www.youtube.com/watch?v=4RKylDUi0sc  (But, be sure to crank up your speakers!) 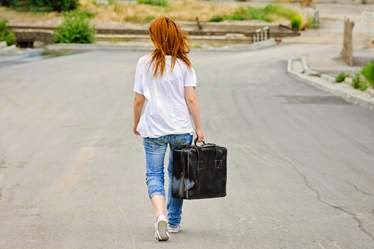 Worst: I guess patience, as in I have very little of it, particularly for other people my age. When you lose your entire family at age 13, it kicks your survival instinct into overdrive and makes you grow up quickly.

Best: Organization. I’m sure a psychiatrist would say it stems from the loss of family, too.  I feel a need to control my environment and to be prepared for everything that can throw it off track again.  But despite my best planning, I sure wasn’t ready to encounter ghosts and demons in my house.

I hate lying.  Yeah, I know – I do a significant amount of it, but it’s only because I can’t let people in the local town realize I’m living in this otherwise-abandoned estate by myself as a 16-year-old.  So, I fabricate this tale that my aunt will arrive soon.  This way, I can be free to stay there and communicate with the ghost that dwells within.

Sorry, my author, D.L. Koontz is stifling me on this one.  She said my answer would be a spoiler for the other books in the series.

Being alone.  And that’s ironic because everything I do seems driven by a need to keep people at a distance.

Again, stifled by my author. But, I can tell you that I’ve met two incredible guys: Clay and Seth. At first, Clay takes my breath away...but then Seth changes, and grows on me...and...okay, author is pestering me again so let’s just say I end up in a love quadrangle (two living guys and one dead..yes, all at the same time).

In Book I? To make peace with my family’s death so that I can move on with my life. I mean, why was I the only one left behind?  In Book II? To help my cousin Michael because a demon begins to possess his body.  Oh, and there’s also an issue with Clay’s father....but perhaps I shouldn’t discuss that.  It’s spoiler stuff, too.

Practical and comfortable.  Well, that is, until I meet and learn how to communicate with a ghost (William Kavanaugh) from the Civil War era in my house.  Then, well, I don’t know...Will touches me and something changes. I suddenly find myself wearing sundresses and more feminine clothing.

I never thought of myself as a rebel, but as my new friends and acquaintances in Williamsport point out: I escaped a volatile aunt, moved into a haunted estate, determined that I’d rather face demons than go back to Boston, and set about resolving a murder that is a century and a half old. So, okay, I guess I am a little rebellious.

Communicating with a ghost. Don’t get me wrong – at first, it freaked me out! Then it became surreal, then almost “normal,” and at times, even comical. When you’re the only one in the room that can see the ghost, well, it’s hard to hold a conversation when both a living and dead person are talking to you at the same time!

After book I? Confused. Clay had to leave town for reasons which you’ll read in the book, and then William left, and then I discovered something even more frightening that remained in my house...but I can’t say what or it will be another spoiler. Suffice it to say that I have a host of frightening things I must tackle before being free to live my life.

My pets (dog Tramp and cat Chubbs) are most important to me, but I’d not classify them as a possession since I adopted them and they are their own living beings. So, second answer would be a gold coin.  My grandmother died, then came back to life long enough to pull it from a chain around her neck and give it to me. Turns out, it was minted before the Civil War, journeyed through the Underground Railroad, and even served as the “center” for the soul (ghost) that I encounter. It even proved pivotal in protecting me when Clay and Will and I encounter a demonic “soul” in the backwoods of southern Georgia.  She had committed suicide on the railroad tracks back in the 1800s. And, she almost killed me...

Stubbornness, I guess.  I lived with a ghost not knowing whether he was a demon or not. I thought that if I resolved his murder, he would help me contact my dead family.  You’ll have to read the book to find out what happened. Anyway, it takes quite a bit of stubbornness to stay in a situation like that!

Ironically, fear.  It arrived the day I became an orphan. I say ironically because everything I do seems to put me into fearful situations!

Holland Greer. He’s a local historian and busy body.  He keeps sneaking onto my property and takes an unusual interest in my life there. I kinda’ wish that Will (the ghost in my estate) would pick him up and toss him over the two-story balcony like he did with the two greasy guys that invaded my home a couple nights after I moved in.

Not  going with my family to my sister’s soccer game on the morning they died. If I’d gone along, I might have delayed the departure time such that they wouldn’t have been at that spot when that mysterious car accident occurred...

I don’t know. Before meeting Clay I would have said someone who is just like me in temperament, outlook, dreams.   But Clay is night to my day, truck to my Volvo, grease to my silk, and yet he is...well let’s just say he’s a thumbs up.

The perfect mix of strength and femininity.  Clay’s mom Cassie, is feminine, yet physically strong and runs her own business (a café which I frequent).

I loved Hermione Granger in the Harry Potter series. She was smart and beautiful and faced danger straight-on. I also loved Gus in Lonesome Dove. He had a confidence and a self-assurance I wish I had, and I sure which I could develop his laissez-faire attitude about life!

My best friend, Adriana. She is positive and focused.  She’s the kind of person who would take a camera and yardstick to go fishing; so sure of a positive outcome. And she’s a major in flute performance, hoping to join the National Symphony Orchestra one day. I’m still trying to discover what my future holds and what my profession will be, although my experiences in Williamsport are helping me figure that out.

That I find the answer to why I love a man that annoys me so much!

Fear makes the wolf bigger than he is. 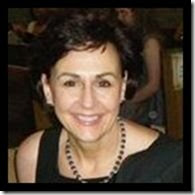 D. L. Koontz was born in Pennsylvania, but with her husband, now splits her time between their home in mountainous West Virginia and their cattle ranch in coastal plains Georgia. She has a son and a stepdaughter. A member of ACFW (American Christian Fiction Writers) and ASJA (American Society of Journalists and Authors), she is a former journalist, business consultant, spokesperson, and college instructor. After several non-fiction books, Crossing into the Mystic is her first novel.