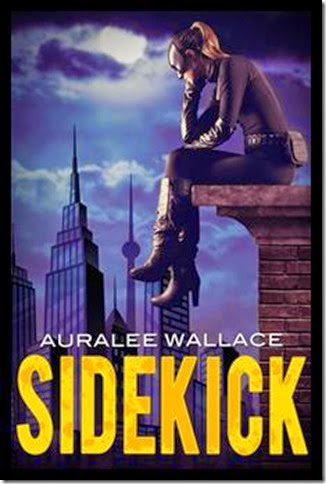 ASIN: Will be available end of April

Heroes meets Kick-Ass in this brilliant and hilarious debut about a girl who just wants to save the world...

Bremy St James, daughter of billionaire Atticus St James, has been cut off from the family fortune and is struggling to survive in a world that no longer holds its breath every time she buys a new outfit. To make matters worse, her twin sister is keeping secrets, loan sharks are circling, and the man of her dreams — a newspaper reporter — is on assignment to bring down everyone with the last name St James.

Things are certainly looking bleak for the down-and-out socialite until a good deed throws her into the path of the city’s top crime-fighter, Dark Ryder. Suddenly, Bremy has a new goal: apprentice to a superhero, and start her own crime-fighting career.

Ryder has no need for a sidekick, but it turns out the city needs Bremy’s help. Atticus St James is planning the crime of the century, and Bremy may be the only one able to get close enough to her father to stop him.

Now all she needs to do is figure out this superhero thing in less than a month, keep her identity secret from the man who could very well be The One, and save the city from total annihilation.

Well, no one ever said being a superhero would be easy...

Great question. I have struggled with this one a lot. Honestly, it wasn’t until I signed my contract for my debut novel, Sidekick,  that I found I could say I was a writer without feeling the need to blush. It truly isn’t the right way to look at it. I was a writer before. I am a writer now. But it’s sometimes hard to see it that way.

About a year. I began my quest for publication by submitting my work to agents. It didn’t take long for the rejections to start coming in. Luckily, I had a couple of agents take the time to tell me that they loved my work, but that the whole “superhero” thing would be a hard sell. A blogger friend of mine suggested I submit directly to publishers – let them be the judge of its salebility. In particular, she sent me the link for Escape Publishing. The submission guidelines stated that they welcomed manuscripts that were “rule-breaking” and “cross-genre.” Well, Sidekick was definitely both of those. I joyfully signed my contract not long after.

Until recently, I was a college professor (English/psychology). My husband’s job moved us to a new city, and we decided this was the perfect opportunity for me to write fulltime – or as fulltime as possible given that we have three small children. There is always the possibility that I will go back to teaching part-time. I miss the students.

It is just like Cinderella…if Cinderella wanted to be superhero instead of princess.

Four to six months. I could probably write more quickly, but life often gets in the way.

I have already begun to write the sequel to Sidekick. I just love spending time in the superhero world.  I am also trying my hand at a cozy mystery.

I have struggled a great deal with this. Urban Fantasy is probably the most appropriate label for Sidekick, but I can’t deny its Chick Lit antics and the debt the story owes to the comic book world.

Bremy St. James definitely.  Writing Bremy is kind of like having Lucille Ball for a best friend. I never know what she’s going to do next.

So far, yes.  I have become a Goodreads addict. I may need to find a support group.

The name, Bremy, is actually a mixture of my daughters’ names, but for my other characters, I have a friend who helps me out. She is very particular about names, and if I choose one she doesn’t like, she is relentless in the voicing of her displeasure…but, oftentimes, I have to admit, she comes up with something better.

I usually have a character in mind first, but I name them almost immediately thereafter. I have to know who it is I’m talking to.

Characters usually do develop throughout the course of the book, but I have to have something in mind before I begin. I don’t like flying blind.

There are probably more than I would like to admit. I tend to think of Sidekick as just a playful romp, but it does have a more serious message. I have been frustrated with the number of female protagonists who seem passive, sad, and wedded to tragedy. I have two daughters. I want them to be inspired to enjoy life. I want them to go after their dreams. I want them to try and fail and then try again. I do realize there’s  a lot of “I”s in those sentiments. My daughters will choose their own paths in life. I just hope I can contribute to a culture of empowerment rather than victimhood.

For a long time, I was a hardback holdout. Then a friend of mine convinced my husband to buy me an ereader for my birthday. At the time, I just given birth to my third child. Let me tell you, it didn’t take me long to realize breastfeeding and ebooks make a winning combination.

Best: The Shining. (I know Stephen King didn’t like all the changes…but come on, how can you not love Jack as Jack?)

Worst: One For the Money (No matter how hard I try, I just can’t accept Katherine Heigl as Stephanie Plum)

Toss up between sushi and salt and vinegar chips! Oh, now I’m hungry. 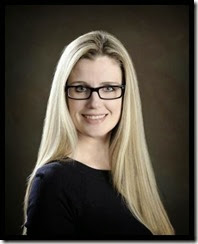 Auralee Wallace has played many roles in her life, including college professor, balloon seller, and collections agent. She is now living her dream of writing humorous women’s fiction. When this semi-natural blonde mother of three children (and psychiatric nurse to two rescue cats) isn’t writing or playing soccer, she can be found watching soap operas with lurid fascination and warring with a family of peregrine falcons for the rights to her backyard.