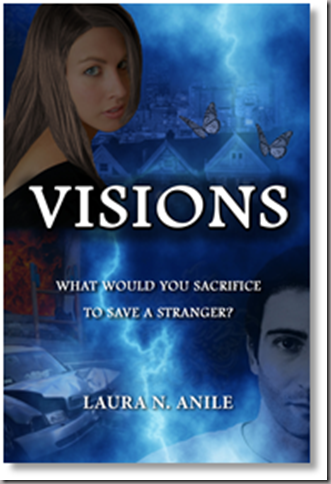 What would you sacrifice to save a stranger?

When Isabel Cartier, a career-driven lawyer determined to rise to the top, begins to experience premonitions of strangers in potentially life-threatening situations, she must decide what she is willing to do—and sacrifice—in order to save the people in her visions.

As her premonitions progress, the level of risk to her own life escalates, and she’s thrown into a mysterious world that will put more than just her career in jeopardy.

It is only when her life spins out of control that she is able to take chances that she never thought possible—including opening her heart to love.

There's Matt, the handsome stranger she saves from a terrible accident. But will she ever see him again? Then there's Jeremy, her thoughtful neighbor who's down on his luck. Both will shape her path and leave her breathless. But it’s another man, who she sees in her visions over and over again, who will leave her questioning everything. Does he have nine lives, or is it up to Isabel to figure out the parameters of a game she doesn't quite understand in order to truly save him?

Visions follows Isabel’s journey to find out if she has the courage she needs to save the people in her premonitions, and how, ultimately, their lives are intertwined with hers.

[Short version: When Isabel begins to experience premonitions of strangers in potentially life-threatening situations, she must decide what she is willing to do – and sacrifice – in order to save the people in her visions. It is only when her life spins out of control that she is able to take chances that she never thought possible – including opening her heart to love.]

The child began screaming; a scream that made your blood run cold. Her mother instantly tried to placate her, eventually smothering her mouth when those attempts failed. That only intensified the screaming, agitating the girl more.

The gunman flew into a rage, demanding the girl be silenced before he silenced her. His hand twitched in fury. Could he honestly harm a child? I wondered, as fear crashed over me. The interminable screaming shrilled through the bank as the girl thrashed in her mother’s arms. My skin tingled, the air electrified with trepidation.

The gunman pointed the weapon directly at the child, narrowing his eyes. A growl erupted from his throat as his feeble control shattered and his finger pulled back the trigger.

There was no time left to decide, to think. There was only time to act. Instinctively, I jumped in front of the young girl as I heard the deafening crack of the gun being fired.

I jumped so violently that I awoke, drenched in sweat.

To read a sample, please go to: Amazon (click to look inside)

Or you can read Chapter One at www.lauraanile.com/sneakpeek

Whoa! This sounds like a thriller. How would you describe the book?

The extract was from a key scene in the book, which the plot builds towards (it’s in the prologue though, so it’s not a spoiler ;-) Her other premonitions are far less intense – things that would be plausible on a more regular basis. The drama and risk involved in her premonitions escalates as the story unfolds.

It’s not actually a thriller – it’s about her journey, exploring the ideas of fate and how we are all connected.

And there’s a love interest or two thrown in J Who doesn’t love a good romance?

The concept of the book makes you wonder just what any of us would do if we had similar premonitions. Would we ignore them or go out of our way and risk our lives to save the people in them?

That’s the question! The premonitions that Isabel experiences start off small and end up becoming increasingly challenging and risky. She needs to throw all of her previous ideas and plans out the window and discover what she’s really made of – and what’s really important to her.

Where is the book set?

Mostly San Francisco, which I think is an ideal backdrop for the story. But Isabel travels to Florence, Italy at the beginning of the book, and three of the chapters are set there. I was actually in Florence when I wrote the first draft of those chapters, so I was inspired J

Speaking of inspiration, what inspired you to write the story?

I was fascinated by the idea of how someone would react in these types of circumstances, especially if that person was the opposite of someone you’d expect to be open to it. Could they ignore it? Would they feel compelled to act? Would they see it as a gift, or be angry and resentful about it?

I like the idea that nothing is what it seems. And just when you think you have it all figured out, the tables turn. What is the purpose, how much control does she really have and, in the end, who is it that is really saving who?

Plus, I like the idea of the girl being the one to save the guys for a change! ;-)

Go to www.lauraanile.com for more information about the author; take the quiz ‘What Would You Do?’; view the book trailers; or read a short story from her collection, entitled Unmasked Secrets.

You can also view the book trailers on YouTube at: www.youtube.com/laurananile

[LINKS TO BE PROVIDED]

* One copy of Visions and ten copies of Unmasked Secrets 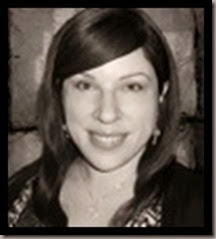 Laura has had a lifelong love of writing, which she explored in a successful marketing career before penning her first novel. She is fascinated by the ideas of fate and interconnectedness, central themes in her story. She loves all things humorous, laughs too loudly and finds her own jokes amusing. She has a passion for traveling and exploring the world but has a phobia of suspect hotel rooms with questionable hygiene. And, oh yeah, she doesn’t own any crystal balls.

Visions is her debut novel. She has also written a collection of short stories, entitled Unmasked Secrets.

Posted by authorkarenswart at 10:43 AM