Today on the blog we have Aydah Bell from Chasing Flames by Emily Fogle for an interview. Sit back and find out more about this girl and her world.

Meet Aydah Bell: Like her name, Aydah is a little odd. Her entire life has been spent living inside her safe little bubble, in her well hidden town, smack dab in the middle of southern California. She and her best friend, Adam have been social outcasts since kindergarten. Besides from being the quiet, loner girl, Aydah has always stood out for another reason too: her bizarre, science experimental worthy, white hair. She was actually okay with being the weirdo, if it meant flying under the radar of her judgmental peers with Adam by her side. However, Aydah’s life is about to be turned upside down with the sudden onslaught of disappearing locals and the arrival of a mysterious new boy. 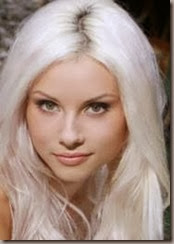 They might be one in the same … my hair!! When I was younger, I was the freak with the white the hair. But now that I’m a little older, it’s grown on me. I’m okay being the outcast with the freaky hair.

I don’t really care about what other people think of me. I’ve got Adam and that’s really all that matters. He is my best friend and understands my weirdness.

Well, and I can’t believe I’m actually admitting this, but a while back I noticed that raw meat actually seemed tempting! I know, totally gross and oh-so gag inducing!! But seriously, I can’t help it. It really does smell good.

The dark. When I was younger, it was really bad.

Between us … Liam. I don’t know why he finds me interesting, but I really don’t care!

I wouldn’t!! I’m a jeans and flip-flop kind of girl! Other than that, I’m lost in the world of fashion.

I’ve always done what I’m supposed: been a good daughter and a good student. Since Liam came to town, however, my sense of just following the rules and doing what I’m told is being tested.

Does being a good daughter and student count? I won a contest in English once. It was a pretty big deal. They used my paper to grade other papers against for district testing. I guess I was kinda excited about that.

Staying inside my little bubble. Although, I’m willing to expand my bubble to include Liam … even if no one else wants me to.

Confused. Let’s just go with that … it sounds better than thinking I’m an idiot.

My stuffed wolf that Adam gave me when we were kids.

Did I mention my bizarre, white hair??

My selfishness and what I did to Adam …

I had never thought of boys in that way before. Not until I met Liam and smelled the sweetness of his skin and heard the music in his voice. I like that he’s a mystery, and, even though it’s infuriating sometimes, I would be lying if I said I didn’t like the cockiness behind his self-confidence.

I love Roland. All the DT fans will know who I am talking about!

My dad. He’s strong and loving.

If you had asked me two years ago – maybe even one year ago – I would have said a lot of things. But now, I’ve learned to embrace my dorkiness, for the most part. I guess I would be a little less awkward around Liam, though … maybe not be so spazy.

Fly under the radar.

Remember to check out today’s spotlight to find out more about Aydah and her world.