Character Interview with Persephone from Daughters of Zeus by Kaitlin Bevis 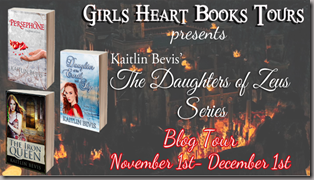 I am so excited to have Persephone here today for an interview! After reading the books I can’t even begin to explain what an awesome girl she is. So sit back and catch some snippets from this amazing little queen, um kind of, um well read the books and you’ll get the picture. Trust me this is one girl you don’t want to miss out on.

Persephone begins the series as a shy sixteen year old living in Athens, Georgia. She's not well liked by the girls of her school, but luckily her best friend Melissa does all the fighting for her. When not in school, she works at Demeter's Garden (her mom's flower shop), has a crush on the hot new senior, Joel, and a passion for the "Dusk" series. Her plan in life was to go to UGA, marry the rock star Orpheus, have twin girls named Harmony and Melody, and move into the house with the white picket fence on South Lumpkin street.

All of that falls apart when her mother announces that Persephone is actually a goddess. Persephone is sure her mother has lost her mind. It isn't until Boreas, the god of winter, tries to abduct her that she realizes her mother was telling the truth. The only place Persephone will be safe from Boreas is in the Underworld. But the only way to get there without dying is to become Hades' wife. After Hades assures her their marriage won't mean anything beyond granting her the ability to come and go from the living realm, Persephone agrees to wait out the winter in the Underworld. While there she learns how to control her powers and explores her growing feelings for Hades. But when Boreas takes her best friend hostage, Persephone knows the time to hide has come to an end. 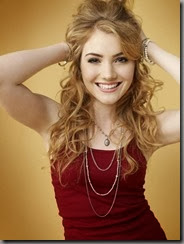 I'm impulsive, and that's a really dangerous thing to be in my world. I do things and say things without thinking through all the consequences. My best quality...I actually don't know if this is a good thing or a bad thing given recent events. I have a very strong sense of justice. Unfortunately, my best and worst traits feed each other and get me into a ton of trouble.

I can't lie. Like, physically can't lie. So don't ask me something you don't want the answer to.

Becoming like the other gods. They're a lot more...harsh than I am. The decisions they make...the thinks they've done...I don't want to be capable of any of that

My normal life back. Or at least parts of it. If I could somehow go back to normal, but still keep Hades, I'd do it in a heartbeat. I know that sounds awful. People dream of being different, being special, but I'm so far from normal that I'm off the fricken map so deep into "here there be monsters" territory that I don't think I could find my way back if my life depended on it.

I'm married...sort of. It's a complicated. Hades had to marry me to bring me down to the Underworld, and marriage is a sort of forever thing to the gods, but it doesn't mean the same thing to them that it means to us...erm, people, humans I mean. It's more political. But I wouldn't object to it meaning more.

How would you describe your sense of fashion? Bohemian. Think Aria from pretty little liars only with more long skirts and flowy clothes. I'm also a bit obsessed with floral patterns. It works for me.

Hah...um, not one. At all. I do absolutely everything my mom ever tells me. I used to think she trusted me because all I'd have to do is promise I wouldn't break the rules and she'd pretty much let me do whatever I wanted...then I figured out I can't lie.

Ah...spoilers ;) You'll have to read to find out

I'm not the best of places right now. I've done something...kind of awful, and I can't undo it. I can't tell Hades, or my mom, or anyone because of this stupid promise I made. It's been stressful.

There's this necklace Hades got me when we were on St. Mary's Island. It's an airplant necklace, ever heard of those? They're these little bitty plants that don't need soil to grow. He added this little pomegranate charm to it so it represents each of the realms I came from (my dad is Zeus, so hence the air part of the air plant). It's...well it's actually kind of weird looking, but I love it.

Well...recently I've become very outspoken, which is new for me, and it's gotten me into all kinds of trouble, but it's worth it. Before, I'd think the stuff I say now, but I'd never say it because I'm really not confrontational and I didn't have the confidence to, like, be upfront because I was so scared someone would shoot me down. I let my best friend fight all my battles for me, and while I love her for being willing to do that, I can speak for myself now. And that's really freeing.

I'm really kind of clueless about all this god stuff, which is not a good thing to be. There are so many rules and limits and things about myself that I need to know, knowledge that comes naturally to most gods that was kept from me. I don't like being kept in the dark.

I...can't answer that. Like, physically. I can not answer that question. But there is someone that I despise very, very much

Gods, *laughs*, if anyone around here was asking the questions you are...do you have any idea how much easier that would make my life? There's this thing that I can't tell Hades, like, physically cannot tell him, and if he would just ask me stuff like this, then the fact that I'm not able to answer him would be such a huge tip off! Augh!

Sorry. Like I said, I'm not in the best place right now. But to answer your question, pretty much that. All of that is my biggest regret.

Honesty. And not just in the being physically unable to lie sense. Just because the gods can't lie doesn't mean they can't mislead. Hell, my mother let me go sixteen years thinking I was human without speaking a word of untruth. I mean something deeper than words. I can trust what Hades tells me on every level, I don't have to analyze it for double-speak, I don't have to search for loopholes, or worry that he's leaving something out. He tells me everything, no matter how hard it is to hear, and I can't even express how much I appreciate that.

Sailor Moon. I was obsessed with that show when I was little. She always felt real to me in a way that most heroes never did. She's not like Superman, this flawless, perfect being that also happens to be super powerful, she has major flaws, and she's terrified most of the time, and she's not afraid to lean on her friends when she needs them. I can completely relate to Sailor Moon.

Orpheus. Surely you've heard of him? He's a rock star, and completely hot, but ignoring all that, he's an amazing person. I know, because I've met him. I LOVE being able to say that. I still can't believe that actually happened, but back to the story.

So it turns out, he's a demigod, and demigods can come and go from the Underworld...for some reason, Hades can explain it better than I can. They kind of fall into a grey area. But since they can come and go as they please, Hades made it to where all the entrances to the Underworld lead to Tartarus, which is a really horrible place. Only good people can cross the river and get out of Tartarus.

Anyway, Orpheus was out hiking with his wife one day, really nice woman by the way, and she gets bitten by a snake and dies. And he loved her SO much that he found an entrance to the Underworld, fought his way throught Tartarus, crossed the river, found the throne room, and begged Hades to bring her back. Can you imagine how scary that must have been? How much you would have to care about someone to literally walk through hell for them? Yeah, he's kind of my hero.

Remember to check out today’s book blitz to find out more about Persephone and her world.

Posted by authorkarenswart at 10:10 AM