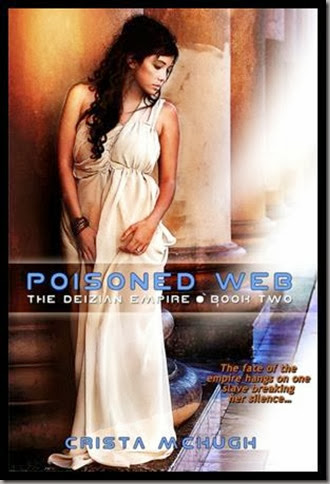 As the Deizian Empire prepares for the upcoming wedding of Emperor Titus Sergius Flavus and Azruha, one mystery remains unsolved—the sudden and unexplained death of the former emperor. And as her wedding gift to Titus, Azurha wants to give him answers. She suspects an unknown poison was involved, and her search for the truth enlists two unlikely allies.

Modius Varro’s thirst for knowledge caused an uproar in Emona three years ago and exiled him to the border town of Madrena. But when Titus falls victim to the same poison, his expertise in medicine becomes essential in solving both the riddle of the former emperor’s death and finding a cure to save the current one. His search leads him to far reaches of the Alpirion realm, to an ancient culture shrouded in secrets, and into the arms of one slave who must break her silence to save the empire.

A roar ripped through the city of Emona, slapping against the walls of the Imperial Palace and making them quake under the force of the noise. The members of the Legion stiffened, their fingers tightening around the hilts of their swords. And all but two of the slaves ran deeper into the inner confines of the palace.

Izana and Farros stood in the middle of the courtyard, refusing to shrink in fear like the other Alpirions.

She glanced at her fellow slave, meeting his gaze in a silent challenge before bolting toward the outer wall. Neck and neck, they raced, the sun beating down on their skin and the thin shimmer of sweat that coated it. Izana ducked under Farros’s well-muscled arms when they reached the narrow staircase to the upper ramparts, using her smaller size to her advantage. She wanted to be the first person to see the newly engaged imperial couple enter the palace. She needed to see her mistress wearing the crown proclaiming her to be the future empress. And she prayed that this would be the first step in gaining freedom for her people.

Her lungs burned in protest as she ran into the wall, but her heart leaped with joy. Even though the carriage carrying Emperor Sergius and his bride-to-be was over a mile down the road, the crowd still cheered outside the palace walls. The people loved Lady Azurha, loved that she had been one of them, that she had walked along these very streets before she found her way into the palace and won the heart of the emperor. By now, the whole city knew how she’d saved his life from Pontus, one of the emperor’s cousins who coveted the throne for himself.

But very few knew the whole truth—that Azurha was the Rabbit, the most feared assassin in the empire. Varro had made those directly attending to the imperial couple swear to this a secret, but how quickly had the gossip spread before he made them take that oath?

Farros leaned against the wall beside her, his massive chest still heaving from their race. Did he know the truth?

“I think my lady’s fears were for naught,” she said, sweeping her hand toward the crowded streets below. “Look at how they cheer for an Alpirion empress.”

His dark eyes glinted with cynicism. “They cheer now, but how long do you think it will last? How many Deizians will bend their knee to a former slave?”

“More than you think.” But his words jabbed a sliver of fear into her chest. She chewed her bottom lip as she started counting the enemies Lady Azurha had made in the last three weeks. For starters, there was Governor Hostilius and his spoiled daughter, Claudia. Not to mention some other Deizians who believed the emperor was soiling the royal line by marrying a woman outside their race.

As though he knew what she’d been thinking, Farros gave a slow nod. “The Deizians may be few, but they hold all the power.” The muscle rippled along his jaw before he added, “For now.”

Nervous laughter bubbled up from her throat. “Are you suggesting someone is plotting to overthrow the emperor and his people?”

“Our people managed to withstand Deizian conquest for centuries.”

The dark intensity of his statement quickened her pulse. She took a step back, studying the man beside her. Farros was built more for the gladiatorial ring than the imperial household, where he worked in the stables. The sleeves of his tunic rose high enough to partially expose a tattoo on the inside of his bicep. He stared at the procession below, the sun reflecting off his freshly shaven head and coppery skin, the corded muscles in his forearms flexing as he pumped his hands into fists. If he wanted, he could snap her neck in a matter of seconds.

He looked back to her, his face sliding into the flirtatious smile he normally wore around her. Only now, she knew it was a mask. She’d glimpsed the man behind it.

“Why do you look so worried, Izana?”

“Because you talk like a man destined for trouble.”

Farros took her hand and pulled her back to the wall, caging her between his body and the stone bricks. The pounding of her heart drowned out the celebration below, but she still heard his low voice whispering in her ear, “As slaves, we’ve been told that as long as we obey our masters, we have nothing to fear. But that may not always be the case.”

Her breath caught, giving her a few precious seconds to choose her words carefully. “You are not my master.”

“Come now, Izana,” he continued, his hot breath bathing the hollow of her neck where the mark of her former owner was still visible. “How many men have mastered you over the years?”

Fury sizzled through her veins, driving away her fear. She rammed her elbow under his ribs. The air whooshed out of his lungs, and his arms retracted to cradle his injury, allowing her to escape. She retreated until she was well out of arm’s reach before replying, “I’m no longer engaged in that business, and unless you wish for me to tell my mistress everything, you’ll keep your hands to yourself.”

Her feet flew down the stairs in tempo with her pulse, never stopping until she was safely within the palace. Thankfully, Farros didn’t give chase. He was probably still doubled over on the ramparts.

Varro, the palace steward, stood beside the locked doors leading to the emperor’s private quarters. He pressed his hand against the plate as she approached, his brown eyes never missing a thing. “Is something wrong, Izana?”

She shook her head. “The sun was very warm today. I’m sure Lady Azurha will be ready for a dip in the tepidarium when she returns.”

Varro nodded, even though his expression told her he didn’t quite believe her. It didn’t matter. Once she was behind those doors, she was safe. But despite the cool tile beneath her bare feet, her cheeks still burned, and her gut twisted as though it held a den of snakes.

From now on, she needed to be wary of Farros. 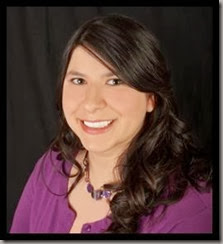 Growing up in small town Alabama, Crista relied on story-telling as a natural way for her to pass the time and keep her two younger sisters entertained.

She currently lives in the Audi-filled suburbs of Seattle with her husband and two children, maintaining her alter ego of mild-mannered physician by day while she continues to pursue writing on nights and weekends.

Just for laughs, here are some of the jobs she’s had in the past to pay the bills: barista, bartender, sommelier, stagehand, actress, morgue attendant, and autopsy assistant.

And she’s also a recovering LARPer. (She blames it on her crazy college days)

For the latest updates, deleted scenes, and answers to any burning questions you have, please check out her webpage www.CristaMcHugh.com