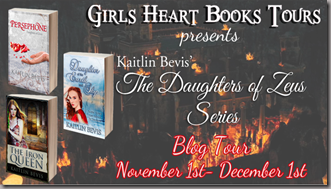 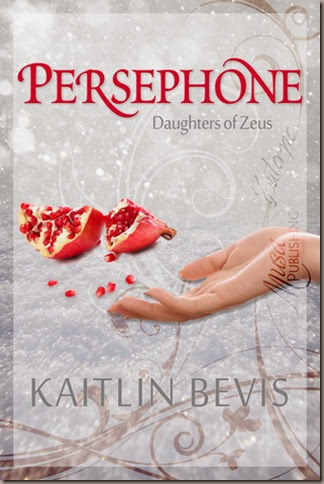 There are worse things than death, worse people too.

The "talk" was bad enough, but how many teens get told that they're a goddess? When her mom tells her, Persephone is sure her mother has lost her mind. It isn't until Boreas, the god of winter, tries to abduct her that she realizes her mother was telling the truth. Hades rescues her, and in order to safely bring Persephone to the Underworld he marks her as his bride. But Boreas will stop at nothing to get Persephone. Despite her growing feelings for Hades, Persephone wants to return to the living realm. Persephone must find a way to defeat Boreas and reclaim her life. 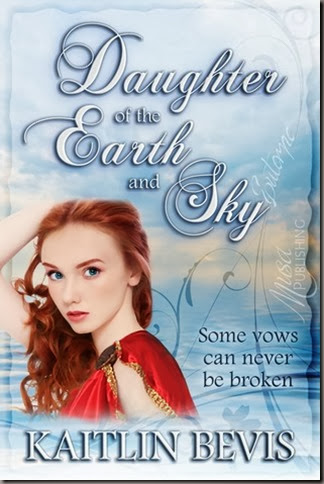 Title- Daughter of the Earth and Sky

Some vows can never be broken.

Persephone thought she could go back to her normal life after returning from the Underworld. She was wrong.

The goddess Aphrodite is born among the waves with more charm than she can control. Zeus is stalking Persephone and her loved ones, and Thanatos is no longer content with Persephone's silence.

He wants her soul.

Persephone can't tell anyone about Thanatos' betrayal, and it drives a wedge between her and Hades. Her mother is still keeping secrets, and Melissa's jealousy of Aphrodite threatens to tear their friendship apart.

Alone, Persephone turns to a human boy for comfort. But will their relationship put him in danger?

Sacrifices must be made, and Persephone must choose between her human life and her responsibilities as a goddess. If she doesn't, she could lose them both.

But will either life be worth choosing once Zeus is through with her? 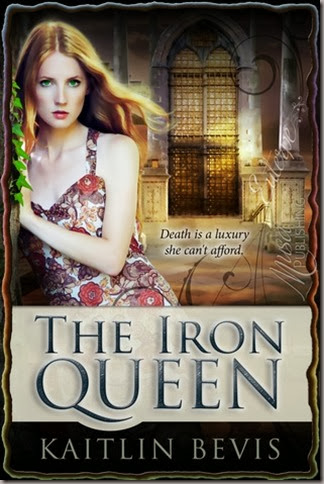 Series- The Daughters of Zeus Book # 3

Life is hell for Persephone. Zeus will stop at nothing to gain access to the living realm and the Underworld, and as the only living god with a right to both, Persephone’s in trouble. Captured and tortured beyond the limits of her resolve, Persephone must find the power to stand against Zeus. But will she be strong enough?

Meanwhile, Hades contemplates desperate measures to rescue his queen. Persephone never thought of herself as dangerous, but there’s a reason gods never marry for love. A being with the power to destroy all of creation shouldn’t place more value in one individual than the rest of the planet. But Hades...Hades would break the world for her.

To save the world and stop both Hades and Zeus, Persephone must make a difficult choice. One that may cost her everything.

Watching my wife chase after a human boy was hell. The heavy rain drenched the thin fabric of her clothes in seconds, plastering them to her body in a way that would be appealing…if he wasn’t going to see her, too. I clenched my jaw. She just doesn’t want him to get hurt. It wasn’t as though I wanted any mortals caught in the crossfire when we faced Zeus either. Persephone was just going to charm the boy into leaving the park.

Tearing my gaze away from her as she scurried up the hill, I searched the parking lot for Aphrodite, or Zeus, or whoever he, she, it may be. I had the layout of Memorial Park memorized, anyway. Who was I kidding? The entire city of Athens, Georgia was embedded in my mind. The precaution was reasonable. Persephone spent most of her time here, and she was a magnet for trouble.

I followed her up the dirt-packed path in my mind’s eye. She’d be rounding the corner now well above the park, oblivious to the way the plants she passed leaned toward her. Persephone was beautiful. Vibrant. Light and vitality pulsed from her that like the first warm gust of a spring breeze promised everything would soon be new and alive again, that winter would thaw into life. Everything was drawn to her. Unfortunately.

My thoughts returned to the human boy she was following. I scowled. Rain fell, pinging against the transparent shield that kept me out of sight while I sat dry atop a metal picnic table. My fingers worried a spot of rust. I tried not to think too hard about whatever else might have touched the shining surface.

This realm was disgusting. Insects swarmed the park, and birds flew through the air, dropping waste indiscriminately onto the world below. I couldn’t wait to return to the Underworld. The surface had its charms, but I had no desire to stay for long.

Persephone’s voice rang through my mind, and I tossed up a mental wall. It wasn’t just good manners preventing me from listening in. This boy had been in her thoughts every night. I’d seen the way he looked at her like she was something to be consumed, the way he touched her like her body was his for the taking, the way her heart raced when she felt his breath upon her neck. I clenched my jaw and studied the parking lot like it might change shape any moment.

She’d probably think less of me if I ripped him apart.

Not that her opinion was all that stopped me. It wasn’t my habit to go around killing mortal children, and not just because I’d have to deal with them in the Underworld. I liked humans. Just not when they groped my wife.

My heart thudded at an uncomfortable speed, filling my body with adrenaline. I couldn’t seem to catch my breath. My hands gripped the edge of the picnic table, and I leaned forward, muscles tensed. That was strange. I had no reason to be this anxious. He was just a kid, and Persephone was Persephone; she had no idea what effect she had. I couldn’t really fault him for being interested, and I had encouraged her to see other people. A spectacularly stupid move on my part. Not only was it condescending as hell to tell Persephone what she should and shouldn’t feel toward me, but I’d managed to push her into the arms of another man. It had taken all of two seconds for me to realize I really didn’t want her to be with other men.

Apparently on top of all my other charming flaws I’m over-possessive. Who knew?

I took a deep breath to force myself to calm down, but it didn’t seem to work. What was the matter with me? Channeling Persephone’s power away every night had given me a very unwanted front row seat to her developing relationship with Joel. I’d seen every kiss, everything, and not felt this before. It hadn’t been pleasant, but—

Cold dread filled the pit of my stomach, and I frowned. This didn’t even feel like rage. My heart was still beating a mile a minute, like it might burst free from my chest at the slightest provocation. I felt strange, no…terrified.

My thoughts flew to Persephone, crashing through the mental wall. Her abject terror flooded my thoughts with such paralyzing force that for a second I lost the ability to move or breathe. All that existed was her fear. The boy spoke in a harsh voice, grip tight on her arm. I rose from the picnic table, ready to relieve him of that limb, when his words filtered through her thoughts.

I blinked. How would he know my name?

A red sports car squealed into the parking lot, and I swore. Hate to interrupt, I directed the thought to Persephone. The boy locked gazes with Persephone and seemed to look through her to me.

I knew those eyes. Images and thought fragments flashed from Persephone’s mind to catch me up, but I already knew everything I needed to.

Persephone, run! I tore through the parking lot to reach the path.

Hades, it’s Joel! He’s Zeus! The whole story passed through my mind accompanied by waves of fear and guilt. Persephone gripping Joel’s arm to teleport but nothing happening, followed by her realization that Joel wasn’t from this realm. Her shock and horror when his glamour melted away. Why wasn’t she running?

Get out of there, now! I couldn’t keep the panic out of my thoughts. If Zeus hurt her…

Our plan, she protested.

She wouldn’t. Only a fool would risk going through with our plan now. We’d intended to trap Zeus by having him stand on an entrance to the Underworld so we could bring some of my realm up and around him. A little slice of Tartarus. It had worked to imprison some of the Titans before, and it could work with him. But not like this. Not with her alone and hopelessly overpowered.

But this was Persephone. The girl who fled the safety of the Underworld to confront Boreas with nothing but righteous indignation on her side. It was foolish of me to expect her to do anything else.

I swore and scrambled up the hill. Just teleport. Leave!

I can get him to the entrance. Hades, this is our best chance.Her determination pounded through me coupled with her desperate need for this to be over. She wouldn’t run. If I couldn’t reach her in time… A bright light seared my vision as I rounded the corner. She screamed, intense pain flashing through her and reverberating to me. I stumbled, blinded by her white-hot agony. Another flash. Pain flared through her, exploding within my mind in a cacophony of anguish. My vision cleared for a split second, and I saw the ground rush toward me. Then everything went black.

The final battle have come Persephone finds herself in the hands of her demented father, Zeus. He wants her power to take the underworld.

Racing to find his wife Hades struggles to unite the children of Zeus to destroy him once and for all. Worse is that he doesn’t have a connection with her anymore, their bond broken by Zeus.

The race is hard, brutal and deadly. She has no choice but to fight back and destroy her father.

Wow this round was epic! Persephone had to endure endless torment and torture from Zeus as he tries to get her powers. But with all her trails Persephone have gowned into a fierce warrior, and Iron Queen. She stands tall and endure it to give the others a chance to destroy him.

On earth Hades and Demeter is gathering all of Zeus Children to kill him. This time around Hades isn’t taking anyone’s crap. I loved this book! Hades was figting everything to find his wife. But Kaitlin make sure to pull on some heart strings and have you clutching the book as more and more is revealed. Finally at the end I could breathe again. If you haven’t started to read this series, you need to start now. It is a must read to all. Yes, 5 Stars all the way. 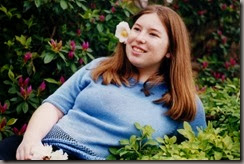 Kaitlin Bevis spent her childhood curled up with a book, and a pen. If the ending didn't agree with her, she rewrote it. She's always wanted to be a writer, and spent high school and college learning everything she could so that one day she could achieve that goal. She graduated college with my BFA in English with a concentration in Creative Writing, and is pursuing her masters at the University of Georgia.

Her young adult series "Daughters of Zeus" is available wherever ebooks are sold. She also writes for truuconfessions.com and Athens Parent Magazine.