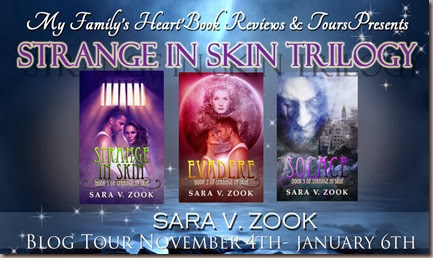 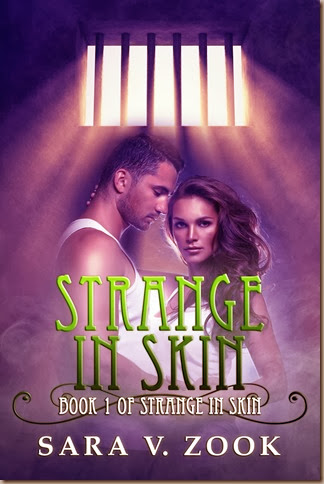 From the moment Anna James meets the strange prisoner Emry Logan, she becomes instantly obsessed and will stop at nothing to try to get another interaction with him. But going against her family and church aren’t without consequence. She is deemed a traitor as she quickly realizes that there’s more to Emry’s past than just murder. He has a special ability that is far from human that he only shares with her. Feeling this magical connection, Anna has to free her beautiful inmate so that they can be together finally, but someone else knows about Emry’s secret and wants Anna to stop digging for answers as she finds herself in the midst of a modern day witch hunt. The life of an innocent pastor’s kid suddenly is turned upside down in a war between good and evil as Anna begins to wonder which people in her life are on the side of good, and is she one of them.

Anna James’ sheltered life is turned upside down the moment she meets Emry Logan in prison. She can’t stop thinking about how nice he was to her and his stunning yet sad blue eyes. Then he writes her a letter asking her to save him which prompts Anna to sneak into the jail as a visitor to see him.

Buck Brady is a local policeman who also has a crush on Anna. Knowing this, she goes on a date with Buck to try to get some answers about the prison as well as Emry. During the date, Buck slips that Emry Logan is incarcerated on a charge of murdering his best friend. On the ride home, Buck’s car gets a flat tire. They walk to Mrs. Anderson’s house nearby where Anna catches her father, the pastor, uncomfortably close to Mrs. Anderson and seemingly in an affair with the strange woman.

Feeling like her secure home life is becoming a lie, Anna finds another letter sent to her from Emry. Returning the prison, Emry tells her about his home life and that he once was married to the wrong woman.

Hanging out with Buck again results in his attempt to kiss Anna, and her disapproval by punching him in the eye. The phone rings at Buck’s house. Anna’s mother is having heart trouble and has been admitted to the hospital. Once there, Anna is disturbed even more to see that Mrs. Anderson has shown up at the hospital and asks to speak to her father privately.

With more home turmoil as Anna’s aunt, Carlin, arrives to help take care of Anna’s mother, Anna tries to stay out of the house as much as possible. She sees Emry’s ex-wife in a grocery store and ends up following her to her house just to get a glimpse of another woman who had stolen the prisoner’s heart.

Obsession taking over her mind, Anna dresses as a lawyer to get a face-to-face visit with Emry. He tells her how he doesn’t remember his best friend dying and tries to tell her that something strange happens to him every once in a while beyond his control. Then they lock hands and Anna realizes she’s not in Seneca, Ohio anymore.

Emry Logan has transported Anna somewhere else, another world named Evadere. They are on a gorgeous beach and alone together where they get the chance to talk about each other’s lives. As quickly as it happened, Anna is jerked back to Earth, her lawyer disguise found out by Buck Brady.

Anna is interrogated by Buck and her father who are very angry with her having been there, putting herself in the position of danger. Instead of going home, Anna decides to go to a bar, not her usual setting, where she finds Buck Brady and his friends. Buck mocks her and Emry. Mrs. Anderson is the one who comes in and puts an end to it. She has some sort of power over the policemen.

Trying to investigate further into Emry’s life, Anna visits his adopted mother’s house, a filthy, old woman with dementia who slips that not only is Emry adopted, but Anna as well.

Anna still avoids home and goes to Mrs. Anderson’s house where she becomes hidden in the woods in the middle of a snowstorm. A group of local men, well known in the community, gather around as Mrs. Anderson conducts some sort of ceremony with a bonfire as Emry’s name along with a Lucas Banesberry is announced during the chant.

Anna digs further into who Lucas Banesberry is as she drives to speak with his family. She finds out a story of a little girl named Cassie who found Lucas and the family took him in and adopted him as one of their own. However, one day while playing with Lucas, Cassie mysteriously disappeared and was never found again. Lucas was arrested, put in prison and on his day of release, assassinated the moment he stepped out of the courthouse. Anna finds that Mrs. Anderson, also known by the last name Hanley, was involved with helping Lucas get locked up.

Confronting her family about her adoption, Anna becomes depressed. She alienates herself from everyone until she attempts to forget Emry Logan altogether. She tries to get her sheltered life back, returning to a normal routine at her mother’s antique shop.

While attending her father’s service one Sunday morning at church, Anna sees her father speaking with Lauren, Mrs. Anderson’s son. They leave in a hurry, and Anna attempts to follow them. She decides to go to Mrs. Anderson’s house and breaks in to investigate. She finds Emry’s birth certificate and an old polaroid of him as a child. She questions why Mrs. Anderson has these items. Lauren catches her in the house and forcefully throws her down the basement stairs where she becomes injured and trapped.

Mrs. Anderson’s other son, a doctor, repairs Anna’s ankle. Her father comes to see her and decides to leave her there. It’s actually Carlin who comes to her rescue to get her out of Mrs. Anderson’s basement and take her to the courthouse where they’ll be announcing Emry’s verdict later that day.

As she’s getting cleaned up in Carlin’s hotel room, Carlin confesses to Anna that she is actually Anna’s real mother.

They go to the courthouse together. Everyone stares as they enter. Emry is declared innocent. He introduces Anna to his attorney, Ben Hanley. The last name strikes Anna’s memory, and she becomes convinced that Mrs. Anderson is related to Emry’s attorney and that he’s in danger. If he leaves the courthouse, he may be assassinated in the same manner Lucas Banesberry was.

After failed attempts to warn Emry, Anna sees a woman pull out a knife and go toward Emry. Anna grabs Buck’s gun and shoots the woman dead before she is able to harm Emry.

The last scene is Emry and Anna walking on the beaches of Evadere together. A man approaches them and speaks to them. They realize that Evadere is not empty, but that there is life living there also. 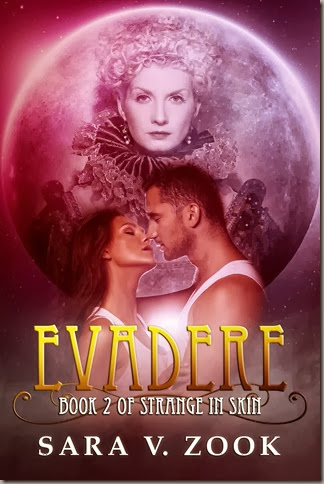 When Anna becomes separated from Emry, she has no other choice but to explore the foreign world of Evadere on her own. She soon discovers that it is tainted from a stirring turmoil among the people.

Evadere has been a place of respite and escape from the difficulties of Earth for Anna and Emry, but alone on Evadere, Anna is pulled into the stirrings of an uprising between the Scaves and the ones who force them to live as scavengers. Anna is determined not to let the fear and attempts on her life stop her from finding her way back to Emry.

But Anna is shocked when she discovers who Emry really is, the forces of evil supporting him and how the temptations in paradise have been misleading them both.

It will take all the strength and determination Anna and Emry possess to survive Evadere, even as the killing starts ... 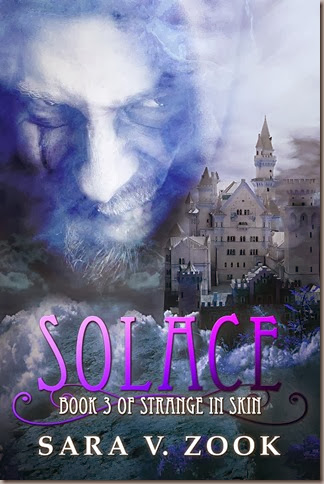 Emry and Anna's love has always been forbidden. They've been hunted, seen those around them murdered and still don't know who to blame or who to trust. In a world where Anna is considered just a human, can peace be achieved between those inhabiting Evadere and those cast out and left for dead? They have to find out who is after them before it's too late, before one of the lives lost is their own, but are Emry's powers strong enough to save the one he loves? As their wedding day approaches, so does a war, and no one sees it coming. 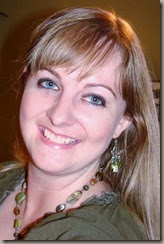 Sara wrote her first book at age six.  Of course, it was only a few pages, handwritten by a 6-year-old and was about kitty cats.  As a child, some days she would be out venturing in the woods with her older brother and cousins, but sometimes would stay inside and create stories, write them down in a notebook and then pretend to publish them by typing them up on her mother's old typewriter.  "I know, what a weird child I was."  From then on out, Sara didn't want to be anything but a writer.  When others would ask her classmates what they wanted to be when they grew up, some would say the usual things, singers, veterinarians, astronauts, but not Sara.  Sara would say writer, and then she'd get a strange stare.  Writer?  What child says they want to be a writer?
Sara graduated from United High School in 2000, a small school out in the country where everyone knew each other from kindergarten up and could tell you every little detail about each other and still can.  "It was a nice area to grow up, and I love going back."
In 2004, Sara graduated from the University of Pittsburgh at Johnstown with a bachelor's in, you guessed it, creative writing.  She had such a blast in college, met some of the greatest people that Sara still remains in close contact with along with her husband, Brad.  They were married and had two children back to back, so while Sara was in "mommy land," her writing was put on the back-burner.

Sara started writing again in the summer of 2010, and after three months, 'Strange in Skin' became the product of her imagination.  Sara had so much fun writing it, she couldn't stop.  She would work all day and then stay up late at night typing up a few more chapters.  She didn't want it to end, so Sara decided she would have to write more books to follow it.  The main characters, Anna James and Emry Logan, were people Sara could relate to, that she loved to relate to.  There's nothing quite like a sappy love story that's so good it sucks you in.  You want them to be together.  They have to be together and you can't stop reading until they are together.  That with a little paranormal twist, and voila, a book is born.
Then Sara and Brad became proud parents once again. Sara is still in "mommy land" but also Strange in Skin fantasy land.  The mix of both raising children and writing makes for some pretty entertaining days.  Sara could write a million stories on her kids alone, especially the things that come out of their mouths that you're either so shocked they said or are so funny that you can't stop laughing.