Book Blast: At His Service by @Suzanne_Rock 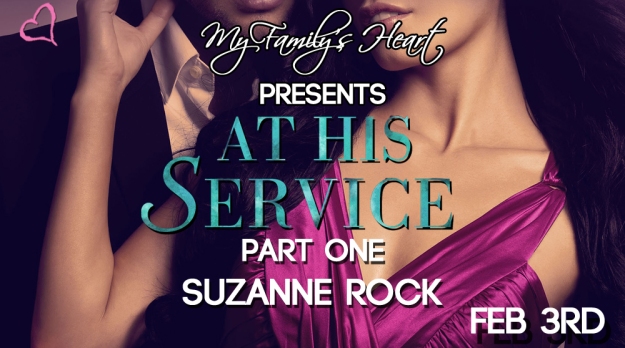 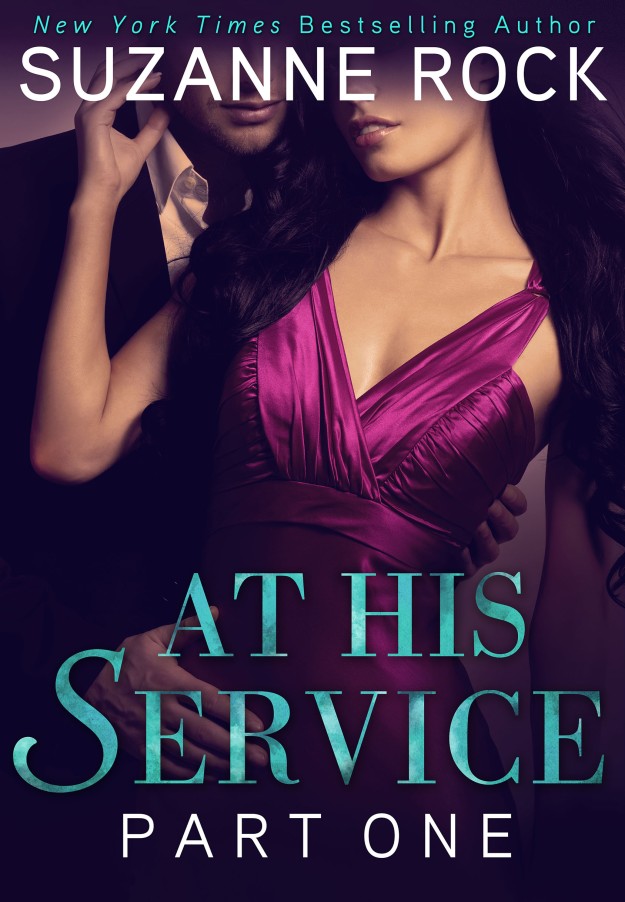 Leo Perconti's life is spinning out of control. As head of his family’s hotel conglomerate, it’s his job to save his family from bankruptcy. At the center of his turmoil is Karin Norell, a quiet, alluring housekeeping manager who compliments his dominating personality and lets him feel in control once more.

As Karin explores her passion her feelings for Leo deepen. Unfortunately, Karin and Leo come from different worlds, and when the two worlds collide, the cost can be devastating. As the service staff at The Palazzo rise up against the Perconti family, both Leo and Karin are faced with losing what each of them holds most dear. Together they must learn that true power comes from vulnerability and trust that can only happen when you let your insecurities go.

Read all four parts of this sensational e-series—and look for the full volume of At His Service in June 2015 from St. Martin’s Paperbacks.

“Damn,” Leo muttered and downed the rest of his glass. “Political connections.” He shook his head and turned toward the bar. “They’re all playing him for a fool.”

Oh shit. Karin had been so caught up in the exchange she’d forgotten to move. How was she going to get across the living area and back to the service elevator without him noticing?

Leo let out a frustrated growl and gripped his tumbler until his knuckles turned white. Tension filled the room, and Karin held her breath.

“Everyone in this family is so self-centered. None of them can see what their selfishness is doing to the company.” He tightened his jaw. “Or to me.”

Karin thought he was going to throw his glass, but he didn’t. Instead, he placed it on the bar and pulled a small pill bottle out of his suit jacket pocket. Karin tried to focus on the writing, but couldn’t make out the words. Leo placed the bottle on the bar next to the ice bucket and pinched the bridge of his nose.

Dismissing the bottle, he let out a long breath as he refilled his drink and made his way toward the bathroom. Toward her.

Shit, shit, shit. Karin glanced around the bathroom. There was nowhere to hide. She clutched the cell phone to her chest and squeezed behind the door. Leo breezed past her into the room and turned on the hot water in the large tub. Steam rolled up from the marble basin, filling the small space. Karin held her breath as Leo undid the buttons of his suit coat and shrugged it onto the floor.

He’s undressing. Karin tried to force her muscles to move, but they refused to listen. She watched as Leo placed his glass of scotch on the floor and then peeled off his layers of clothing, one by one.

For once, Karin didn’t mind the mess. Wes was right, the Perconti brothers were sinfully handsome, and the oldest brother was the best looking of the lot. His tan stretched up his muscular arms, around his perfectly formed shoulders, and down his lean, angular back. Even his firm, tight ass was a golden color, putting delicious thoughts of Leo sunbathing nude in her mind.

She could easily picture his sleek body stretching out on some Italian beach, soaking up the sun. Karin wondered what it would feel like to press up against such a flawless physique and feel those solid hips between her legs.

She dropped her gaze down his torso as he turned toward the marble tub. Dark hair dotted his chest and lower abdomen, drawing her attention to his long, thick cock. Karin’s heartbeat drummed in her ears as he stepped into the bath. Something fluttered inside her as she imagined crawling in alongside him and running soap along his athletic frame.

Oh God, she needed to focus. It had been far too long since she’d had sex, even longer since she’d had great sex. Looking at the grace and muscular beauty of Leo Perconti’s body, she knew that a night with him would go a long way toward alleviating all of the stress that had been building up inside of her.

A dull ache formed between her thighs as she imagined straddling his hips and taking his hard cock deep inside her channel. She reached down her torso and pressed her hand against her mound and imagined his muscular body pressing up against hers. Embarrassment at her boldness heated her cheeks.

She bit back a groan of disappointment as Leo slid under the warm bathwater. His back was once again facing her and she knew that if she wanted to save her job, then she had to get out of there, fast.

Enough daydreaming. It was time to go. After one long, wistful glance at Leo, she slipped out from behind the door and edged out into the hallway.

Karin froze as the thick Italian accent rose up from the tub.

Karin turned back to the bathroom, unsure of what to do. She judged the distance from her spot to the elevator and wondered if she should make a run for it. Her escape depended on Wes having sent the elevator back up for her. If she had to wait for the doors to open, then she’d be caught. If Leo found cleaning staff in his room, she could get in trouble. Could she trust Wes to send the elevator back for her?

“I know Marco sent you.”

Leo chuckled. “There’s no need to be coy with me. I know all about my brother’s ‘connections.’ If the man spent as much effort fixing up this hotel as he did bedding socialites, we wouldn’t be in this mess.” He raised his glass to his lips. “So tell me, are you the pushy one, or the one who was willing to please?”

“I’m sorry, I …” Did Leo think she was one of the socialite friends Marco had offered him earlier? She scrunched her nose in disgust. She wasn’t an empty-headed socialite. And yet, there was something rather appealing about the idea of pleasing him.

“I—no.” She glanced back at Leo’s long, lean form as it lounged in the tub. Wes’s words floated through her mind. You need some sex, girlfriend. Loosen up. “Not a guy.”

“I thought as much. You don’t sound like a man. Come here and let me see if my brother’s friends are as beautiful as he claims.”

Leo Perconti was brazen. She should feel offended, but that voice did things to her body that made her want more. Karin wanted to obey his command and see where things led. Besides, Leo didn’t ever have to know her real identity. It was the perfect opportunity for a glorious night of passion without consequence.

No, there was one consequence, a huge one. Leo was her boss’s boss. If he found out that she’d tried to deceive him, then he’d take it out on Marco. Not only would she be fired, but Marco could and probably would make the entire staff suffer for her indiscretion.

But then again, wasn’t she in charge of making sure Leo had a pleasant stay? If the night went well and he was in a better mood around his brother, then she would have done her job. It wasn’t like they’d be constantly running into each other. The staff was supposed to stay out of sight as much as possible. If by chance they should see each other again, she could always play ignorant. No one would have to know what had happened in this hotel room except her.

Karin looked from the hallway to the bathroom and back again. All she had to do was accept the night for what it was—pure physical bliss. No strings attached. If she could get away with this … it would be one hell of a night.

Resolved, Karin pocketed Wes’s cell phone and straightened her skirt. She paused over the hem as a new revelation hit her. Shit, my uniform. Leo would mark her as an employee as soon as he saw her.

Perhaps it could be part of the game. She could tell Leo that she’d needed the uniform to get past the paparazzi downstairs undetected. All she had to do was come across confident of her abilities.

Confidence. Ever since she had caught her former boss fucking a politician in his office, Karin’s confidence had remained hidden. She wasn’t sure if she had it in her to pulls omething like this off.

“Are you coming?” Leo asked. “Or am I going to have to come out and get you?”

“No, I’m coming.” She could do this, she just needed to stop overthinking.

Didn’t Wes just accuse her of being too serious? This night was about de-stressing and relaxing.

Karin cleared her throat and adjusted her bra. Her breasts were on the small side of normal, but hopefully they’d be enough to please him. She undid the top few buttons of her blouse, revealing the upper curve of her breasts. After pinching her cheeks, she hid her shaking hands behind her back and concentrated on swaying her hips as she moved closer to the large, marble tub. Here goes nothing.

OTHER BOOKS TO COME OUT IN THIS SERIES

A lifetime New Englander, Suzanne married her college sweetheart and has been with him for over twenty years. Every summer she drags her husband and two daughters to Maine on a quest for the perfect lobster dinner. Every fall she can be found down in Foxboro, Massachusetts cheering on her favorite football team. In between those trips, she’s a chauffeur, a maid, a chef, an event planner, a hairdresser, a wardrobe stylist, a tutor and a sometimes masseuse. To keep her sanity, she often drinks copious amounts of coffee and stares at the blank screen of her laptop, dreaming of great adventures. Sometimes she even writes them down for others to enjoy.

This Blitz was organized & hosted by