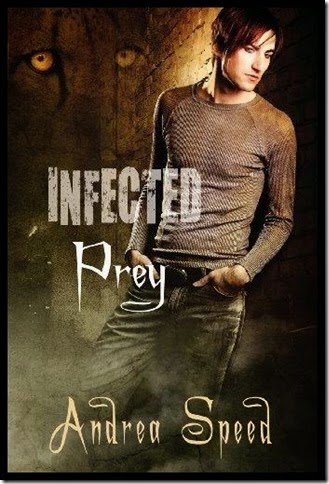 In a world where a werecat virus has changed society, Roan McKichan, a born infected and ex-cop, works as a private detective trying to solve crimes involving other infecteds.

The murder of a former cop draws Roan into an odd case where an unidentifiable species of cat appears to be showing an unusual level of intelligence. He juggles that with trying to find a missing teenage boy, who, unbeknownst to his parents, was “cat” obsessed. And when someone is brutally murdering infecteds, Eli Winters, leader of the Church of the Divine Transformation, hires Roan to find the killer before he closes in on Eli.

Working the crimes will lead Roan through a maze of hate, personal grudges, and mortal danger. With help from his tiger-strain infected partner, Paris Lehane, he does his best to survive in a world that hates and fears their kind… and occasionally worships them.

HE was on his third beer of the evening when he thought he heard a noise in the backyard.

Hank DeSilvo scowled and looked out the window over the kitchen sink full of dirty dishes. He could see nothing but darkness, and maybe a bit of reflected light from the television. This was probably a bad time to remember the back porch light had blown out two days ago, and he’d forgotten to replace it.

Not that it mattered. The only light currently in the house was coming from the television, and as long as he ignored it, he developed enough night vision to make out a shape moving in the back garden. Or was it the wind moving a shrub? Kind of hard to say.

He slammed his can down with an annoyed grunt. It was probably the Hindles’ stupid ass dog again, shitting all over the place and tearing through his garbage. He hated that fucking thing, some ugly Rottweiler mix they insisted was a “friendly” dog, and yet it always had a look in its flat, black eyes that was just this side of rabid. They never leashed the damn thing either, and apparently his yard destruction was “cute.” He was just about out of this fucking place and that damn thing had to make a final appearance. And it was final all right; he was going to make damn sure of that.

He went back to the living room, glancing at the game as he walked past—it was a fucking damn boring game anyway—and got his shotgun from the cabinet. It was illegal as all hell, a sawed-off thirty ought six with the barrels cut so short you could have stowed it under a jacket, but the barrels had been filed down expertly; it wasn’t just the rough work of a desperate amateur but the sign of a pro. Which was why, when they’d searched the drug mule’s truck and he’d found it wedged under the front seat, he hid it in his trunk and didn’t report finding it. It wouldn’t have added that much to the mule’s sentence; he already had enough rock in his glove compartment to put him away for the rest of his pointless life, especially if it was his “third strike” (and it was, no surprise there), and he doubted the guy was so stupid that he’d actually ask why he wasn’t charged with owning an illegally modified weapon. Yeah, he was dumb; you had to be dumb if you were speeding and had a few thousand in rock in the car, as well as being obviously stoned yourself. But asking after that was a special kind of stupid, the kind only politicians and people on reality television ever seemed to crest.

He cracked open the gun and made sure he had some shells loaded in it before snapping it shut again with a sharp flick of his wrist. Man that felt good. This was a real man’s weapon, made him feel a foot taller and made of pure muscle, and he knew why that meth fuckhead was carrying it around with him. A weapon like this was a real god-killer; it made you feel invincible.

It was pure overkill, of course. The Hindles’ dog was fairly big, and yet one shot from this gun would rip it in half clean down the middle, as well as make a boom loud enough to set off every car alarm on the block. But what the fuck did he care? He was an ex-cop; he’d say the dog charged him, and on his property he could shoot the fucking thing if he wanted. He’d swap out the sawed-off for his Remington before they arrived. Ballistics wouldn’t match, but by the time they proved that, he’d be long gone. Good-bye, shit-hole city; hello, tropical paradise. It was just a shame that it took him this long to collect.

He stood at the back door for a moment, cradling the shotgun gently, and let his eyes get adjusted to the dark before going out onto the concrete patio. He had a mini Maglite with him with a red lens over the bulb, so if there was something he needed to see he could twist it on without losing his night vision. Not that he needed to make a direct hit; even if he just winged the dog, he’d probably rip half its face off, maybe a leg.

First step off the patio his foot squelched in something; it felt too liquid to be shit, but the smell that hit him was meaty, redolent of shit and offal and God knew what else. Had that fucking dog already strewn his garbage about? Goddamn it.

Holding the shotgun in one arm, he turned on the flashlight and looked down at what he’d stepped in.

At first it looked like a puddle, which didn’t make sense since it hadn’t rained in a week, and the thought that it was dog piss was dismissed since it was dark, and dog piss wasn’t usually black. Or was that red-black? Swinging the light outwards, he saw greasy, ropey strands that couldn’t have come from his garbage can, and then a big hunk of raw, bloody meat like a lamb shank… only it was too long and thin to be a shank, too dark, and ended in a paw.

It was a Rottweiler leg.

Someone—something—had dismembered the Hindles’ psychotic dog and spread about a third of it all over his backyard. He saw the leg, which was the biggest piece, an assortment of internal organs, loops of intestines laid out like fallen party streamers, and lots of blood. But where was the other two thirds of the dog?

The hair stood up on the back of his neck, and he knew he had to get the fuck inside now. But as he turned, shotgun at the ready and braced against his hip, he saw the flash of white teeth in the dim moonlight, and his brain sent out the impulse to pull the trigger.

He didn’t have time to wonder why it never happened as the teeth ripped open his throat.

Character Bio: Born in suburban Vancouver to a couple of college professors, Paris was the only son, and was gifted with a natural, overwhelming charm and great beauty. So of course he used it to his advantage, and was a bisexual libertine for much of his teens. It all changed in college, when he hooked up with the wrong woman and found himself infected with the tiger virus. He had a bit of a nervous breakdown.

My charm is actually the answer to both questions. It’s my gift, and my curse. Which doesn’t work as well if you can’t see me pulling up my cape dramatically and stalking from the room.

I’m really sorry for being a dick when I was younger. I was kind of insufferable.

If I put my mind to it, I can juggle. Not more than three items, and I have to be in a good mood. Also, if you told anyone about it, I’d have to kill you.

Changing into a tiger and eating someone.

A cure? Or more time. I’d take either.

Seriously taken. I have met the greatest guy in the world.

Fabulous, of course. I am stylish and sexy.

You think I’d be a huge one, and Roan, being an ex-cop, would be the fuddy duddy, but he likes to fight. Roan doesn’t follow rules blindly, and while I like a good, sexy rebellion, I’m not fully committed to it, especially if it gets hard. So I’ll be the spokesmodel of your revolution, but it’ll be Roan doing the heavy lifting.

Being snuggled under the cover with Roan.

I don’t really have one. Possessions are ultimately meaningless. It’s people that matter.

Being as charming as sin, and twice as lovely.

Bigoted bastards. And hypocrites are pretty odious too.

I try not to despite people too much, because all that negative energy gets to you after a while.  But I suppose Louis Gorse. He knows what he did.

That I didn’t meet Roan sooner.

A sense of humor. I know everyone says that, but I mean it. Being hot is also a plus.

Again, a sense of humor is nice. And being hot is still a plus.

Oh, Roan, of course. Once you get to know the guy, it’s hard not to admire him.

Well … I probably wouldn’t be infected.

As I go, so goes the party. 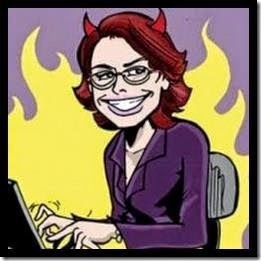 Andrea Speed was born looking for trouble in some hot month without an R in it. While succeeding in finding Trouble, she has also been found by its twin brother, Clean Up, and is now on the run, wanted for the murder of a mop and a really cute, innocent bucket that was only one day away from retirement. (I was framed, I tell you - framed!)

In her spare time, she arms lemurs in preparation for the upcoming war against the Mole Men. Viva la revolution!