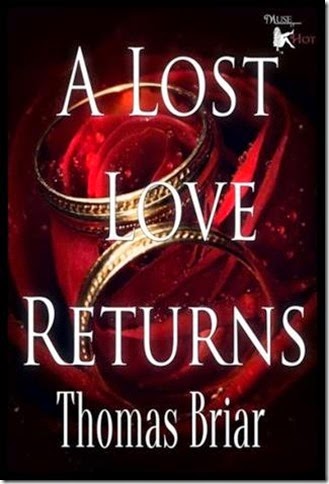 Three years after her boyfriend's mysterious disappearance, Clarissa has finally recovered enough to move on with her life. She's graduated from college, found a good job, and is engaged to someone else now. She is happy once again.

So why has Jake, her long lost first love, suddenly turned back up in Key West, Florida at their favorite sidewalk café? Where had he been and what had he been doing during his absence?

But most important of all, what could he possibly want from her after all this time?

Clarissa looked up from her espresso to suffer a shock of disbelief. She blinked several times, thinking her eyes must be deceiving her. It couldn't be him. It just couldn't be.

Yet, there he sat three tables away from her—the lost love of her life—having returned to Key West and their favorite sidewalk café from…? She honestly couldn’t say because she didn't know where he'd disappeared to or the reason behind his sudden abandonment of her three years ago.

She trembled in the warm morning air as a plethora of emotions assaulted her beleaguered mind in quick succession: anxiety, intrigue, longing, regret, anguish, love, sorrow, and finally…indignation.

With every passing second that she resisted the tremendous urge to get up from her seat and walk over to make her presence known, the more equilibrium she regained. She could not, would not, go to him. At twenty-five years of age, with more life experience than most women her age, she knew all about the virtues of having patience.

To help sustain her resolve, she looked up at the clear blue sky, the other patrons enjoying their morning coffee, a lone car coming down the street, the group of retirees huffing along the sidewalk for exercise, everywhere except at him.

When she couldn't take the suspense any longer, her gaze returned to her former lover. He remained sitting there all alone, head tilted down as he texted on his cellphone. He looked pretty much the same as she remembered.

In fact, he still parted his dark, wavy hair on the left side, although it was now cut short. He was very tan and his clean shaven, angular face still matched his lean muscular body perfectly. The board shorts, T-shirt, and sneakers he wore lent an impression of youthful vitality. Yeah, his early thirties looked really good on him.

In comparison, she hadn't changed much either, although she now colored her curly blond hair a soft light brown. She'd also grown it out to mid-way her back but still kept it cut around her oval face. She thought this hairdo best suited her voluptuous, hourglass figure. And the pants suit with heels she wore today fit her better than the tank tops, cut-off shorts, and flip-flops ever had.

As she continued staring at him and obsessing over his reappearance, she couldn’t help remembering how safe she'd felt within his strong embrace…how lucky she'd believed she had been at finally having met a man to share her whole heart with…how well their bodies had fit together…and lastly, of how much soul-connecting lovemaking they'd indulged in. What had gone so wrong for him to abandon her without an explanation? And why had he suddenly turned up again?

Under her patient gaze, it became inevitable that he would eventually look up and see her. The moment it happened, his blue eyes widened, his face went slack, and then he mouthed her name in silent recognition. She only stared back at his stunned expression, trying her best to hide her own inner turmoil.

He promptly got up and came over. In a deeply masculine voice, he said, "Hello, Clarissa. I was hoping I'd run into you here. May I sit with you?"

She stared up into his pale blue eyes, melting a little on inside. But still, she somehow held onto enough of her composure to say, "I don't know, Jake. You'll probably disappear on me if I turn my back for a second. So maybe you shouldn't."

"I have a very good explanation for my disappearance." He pulled out the patio chair across from her and sat without permission.

"Men always do, don't they?" She'd looked across the street at an elderly couple walking along holding hands. An old scar burst open inside her heart. She'd once envisioned Jake and her growing old together.

"I went away because—"

"Don't care to hear it." She cut him off, wanting to hurt him like he'd hurt her. She kept looking at the old couple while absently twisting her coffee cup around and around. "Besides, I'm getting along just fine without you. In fact, have you heard the news? I'm getting married in three weeks."

"Yeah, I read about it in the paper a few weeks ago."

"So you get the paper delivered to wherever you've been." She smiled at the old woman giggling at something the old man had said. Underneath the terrible pain searing her heart, she added, "And I saw you with a cellphone. You were texting, I believe. So you're obvious up to date with the modern technology of our times."

"I read the local paper online. And yes, I have a cellphone. I get it—you think I should have already contacted you."

"I always thought I'd get back to you and Key West sooner."

"Oh yeah?" She shrugged her shoulders, keeping her gaze on the old couple. "I thought that too, right up until I decided you were either dead, or wasn't ever coming back."

"I almost did die, several times," he stated. Then, in exasperation, "Won't you at least look at me? I can explain what happened."

"Why should I let you? As I remember it, you received a mysterious phone call in the middle of the night, and then you got really agitated before leaving without a word of explanation."

"Not your turn to talk, Jake!" Clarissa cut him off again, still refusing to look at him. "I think it's time we play a little game of who-knows-what. I'll start it off. You can jump in whenever I ask a question."

Character Bio: Clarissa is twenty-five years old, a successful lawyer in Key West, Florida where she grew up. Some might call her beautiful, but she'd rather be known for having a beautiful mind. So you might better keep an eye on her, because she believes cleverness is a virtue. *wink*

Describe your worst and best quality?

It's one and the same--my determination. I never give up when it comes to going after what I want. But it's been known to get me into trouble because it can be both a blessing and a curse.

I’ve got a heart of gold.

What is your biggest secret something that no one knows about?

I'm the cleverest of girls. Yeah, that's probably it.

Becoming a victim of circumstance.

What do you want out of life?

Most of all, I want to reconnect with my former boyfriend, Jake. Once I get him back, everything else will fall into place.

I'm supposed to be getting married in three weeks to a wonderful man. But now Jake has shown back up out of the blue. Decisions…decisions… No worries though. I've already gotten it all figured out where I'll get my happily ever after and no one will get hurt in the process.

It used to be tank tops, cut-off shorts, and flip-flops in college. These days its pant suits and business skirts with heels. Ah, the joys of transitioning into the responsibilities of adulthood…right?

How much of a free-thinker are you?

I'm always thinking outside of the box. And I'm sure I always will.

Official answer: landing a great job after graduating college. Unofficial answer: haven't accomplished it yet. But I'm going to real soon. His name is Jake and he's six feet of lean masculinity, has the most beautiful pale blue eyes that you've ever seen, and a confident demeanor that I find irresistible. He's also the one that got away.

It wouldn't be polite to say. However, I will give you a hint…Jake's mistakenly believes it belongs to him.

What is your most admirable characteristic?

Right this moment I'd say that it's my unwavering resolve to see this stage of my life through to its inevitable happy ending. Yeah, that's probably as good an answer as any.

Hopelessness and helplessness. I've found that both of those awful emotions walk hand in hand. In fact, I think of them as siblings that feed off one another to gain strength.

Which living person or persons do you most despise?

Complainers. Just can't stand listening to them whining about their problems when they could easily take some initiative and fix whatever it is. But just so you don't think I'm too critical of others without just cause, I'll readily admit that I fell into despair after Jake left me. And yes, I moped around for months on end feeling sorry for myself. It didn't bring him back. So I got a new, can-do attitude to survive the breakup.

Letting Jake walk out of my life three years ago. That mistake still haunts me to this day. I should have found a way to stop him, or at the very least, convinced him to take me with him.

That depends on the man. But in the particular man I'm after, it's his confidence. Never met another one so sure of himself and how his emotions will manipulate mine.

Who is your favorite heroine in fiction?

Too many to count. But I like the clever ones best. You know the kind that understands doing nothing to fulfill their romantic aspirations gets them nowhere. Yeah, those are my absolute favorites.

Which living person would you like to change lives with?

I've never wanted anyone else's life. It's much too interesting living out my own.

Answering that would be like a dog chasing its own tail. It never gets you anywhere. I've found the trick is to do everything in your power to enhance what you've already been blessed with.

When he's not writing, he enjoys reading, spending time with his wife, taking long walks, and people watching. Yeah, he's always wondering what makes people do the things they do. He knows it's usually something hidden in plain sight. He just has to figure out what it is, much like the motivations of the characters in his stories.