Book Blast & Interview: Help Me Move On by @angiehemmings04 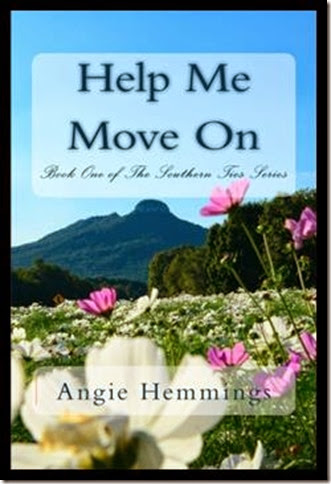 Help Me Move On

Ally Dunn is a small town girl with big dreams planning a wedding that would never happen. Ally’s life revolved around being Eric’s wife…until she watched his best friend Isaiah step off that plane, his arm in a sling and Eric's casket behind him. Her grief consumed her, their last conversation not one filled with love but an argument over her favorite flower. He knew her favorite flower, he was just busy…fighting for his country. Isaiah made a promise to Eric, he would keep Ally safe even if that meant saving her from herself. Isaiah takes Ally away when her grief becomes too much but their return brings about something she never expected.

When Ally meets Colton Walker she knows her life will never be the same. She never planned to move on from Eric, the mere idea of moving on would send her into a panic. How do you move on from the man you loved, the man who shared your dreams, who made your heart feel whole? But Colton doesn’t push her, he doesn’t pressure her, he gives her everything she ever needed and he does it effortlessly.

Falling in love with Colton was like taking her next breath; she didn’t have to think about because it came naturally…only a cloud hangs over Ally. Isaiah trains her in Krav Maga, Eric trained her in gunfire. Colton sees all of this, asking the one question she can’t answer, why? Why would a woman who lives in such a small town need to know such aggressive self-defense? Isaiah vows to keep her safe, going so far as to track her every move…but why?

Surviving Eric’s death almost killed Ally, the hole in her heart never truly healed until Colton. Falling in love with Colton was easy, fighting for her life when everything she thought she knew was wrong…that was a completely different story.

Hey guys, I’m Angie Hemmings the author of Help Me Move On. We’re knee deep into this blog tour and I thought you guys would like a character interview from one of the leading men. When we watch Ally struggling with her grief it’s hard to not want to help her and even Isaiah tries but at the end of the day it’s Colton who helps her do what she never thought possible...move on.

So what better way to get to know this awesome guy than an interview?

Interviewer: You’ve been in charge of the Pilot Mountain Fire Department for how many years now Colton?

Interviewer: What made you decide to become a firefighter?

Colton: There was a fire at my house when I was younger. I was upstairs with my brother and we couldn’t get out. The fire was at our door and that’s when the fireman came. He saved us from burning alive and after that I knew what I wanted to be.

Interviewer: We rarely hear about your brother. How was it he died?
Colton: My brother was a good guy. When he started using meth we tried to help him but sometimes the best intentions fall short.

Interviewer: And you found your brother?

Colton: I came home from school that day and he was laying on the bathroom floor. Days without sleep, food, and too many drugs had finally caught up to him.

Interviewer: Would you say that your experience with your brother made you stronger? Perhaps helped you when it came to Ally and the grief we all watched her struggle with?

Colton: There are stages to grief and we all have to work through them. I don’t think finding my brother made me stronger but I do think it made me smarter. I learned what to look for in people. You have to pay attention to the little things if you want to understand the big picture and in the end I do think that helped me with Ally.
Interviewer: But your dedication to Ally is not one to be denied. From the day Ally came home you were there.

Colton: That was a lucky coincidence more than anything. Nate needed a ride and I was the ride.

Interviewer: As your relationship developed is it true that Ally began to receive flowers? Roses that did not come from you or anyone that she knew for that matter?
Colton: Yes.

Interviewer: Who do you think would send her flowers?

Colton: Someone who wants to send a message.

Interviewer: And that message is what?

Colton: I’ll tell you when I figure it out.

Interviewer: The fire that has been devastating the park has caused a lot of headaches for you. Fighting these fires all the while Ally was attacked in her own home. You left with her that day even though there were a lot of people who needed you to stay. There are many people questioning your dedication to the fire department that you say you love. How do you respond to those that feel you should be removed from your position?

Colton: I did have to leave but even in my absence the department ran just as I knew it would. We’ve trained for the fires that took over the park and we were prepared to fight these fires. In regards to those that feel I should be removed from my position I’m sorry they feel that way but it’s not going to happen. I’m good at my job and keeping this town safe is what I do.

Interviewer: About your absence, is it true that you were in a secluded cabin in the mountains?

Colton: Does it matter where I was?

Interviewer: If the rumors are true then yes. Is Eric Thomas alive? Is it true that he kidnapped Miss. Dunn?

Colton: Rumors have a tendency to be not only false but they cause unwanted trouble.

Interviewer: Could you clarify your relationship with Miss. Dunn?

Colton: Ally is off the market if that’s what you want to know.

Interviewer: How did your relationship begin?

Colton: I’ll say this. I met her on what was one of the hardest days of her life and I knew the moment I touched her that we would be together, I just had to be patient.

Interviewer: How did you feel when she joined the Peace Corps? Moving away to another country with another man? That had to be hard on you.

Colton: It was hard to watch her leave but she needed to go and I understood that. As far as Isaiah is concerned, he was there to protect her and that was it.
Interviewer: You’re not threatened by the fact Ally is close to another man?

Colton: To be threatened would imply that there was a threat. Ally has always looked to Isaiah more like she would a brother. I saw that even the day of the funeral.

Interviewer: All I see is a war veteran and a young impressionable woman who was grieving herself to death. It doesn’t seem unlikely that their bond would turn into more, especially while spending a year away in Uganda.

Colton: I guess it’s a good thing you aren’t me then.

Interviewer: Do you ever feel that you can’t compete with the memory of Eric? Her wedding was planned, the invitations had gone out, everything was planned and then he was gone. We all saw how she struggled, how much she loved him and then you come into the picture. Is it easy to follow in his footsteps?

Colton: I would never try to compete with Eric’s memory. He was Ally’s first love and I want her to have those memories. I want her to have the happy memories of their time together but I’m not walking in Eric’s footsteps and I’m definitely not competing with his memory.
Interviewer: You’re not?

Colton: No. Eric was her first love, he wasn’t the love of her life.

Colton: I’m the love of her life. It’s a fact and it’s not something to be challenged.

Interviewer: Is there wedding bells in your future Colton?

Interviewer: Now that you’re home what are your plans?

Colton: Spend time with Ally and plan my next mudbog.

And that ladies is Colton Walker.

I hope you guys enjoy Help Me Move On and the characters I’ve grown to love. I love the cool confidence we find in Colton and I love the fact he’s not threatened by Isaiah. Most men would be but with Colton it’s like he just knows. He knows that he’s going to get Ally it’s just a matter of time and he’s willing to wait for her to be ready which makes me love him all the more. To me there’s nothing better than a man who is sexy and confident yet he’s not an asshole. There’s a fine line between being confident and being conceded...Colton is the furthest thing from conceded all the while we see his past and you want to hug the man.

What would you say are your favorite features to an Alpha Male?

Angie Hemmings is a self-proclaimed romance addict. Her love for romance began at an early age but after years of reading romance novels she found herself wanting more which led to her first novel. She's originally from Mount Airy, a small town in the foothills of the Blue Ridge Mountains and she loves the art behind creating a new story. Getting lost in the romance, the struggle between her characters is what makes Angie Hemmings continue her work and writing is what she loves.