Book blast, Giveaway & Interview: Sing For Me by @authorgracie 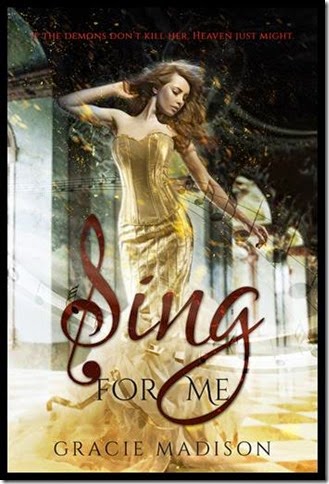 Madeline Noel fled war-torn Heaven to hide within the mortal world, but the blessing that could protect her from evil is the holy realm’s forbidden power.

As a talented soprano for the Eden Theatre Company, Madeline hides among prima donnas and tone-deaf flutists. Her perfect voice may entertain audiences, but a careless laugh may shatter glass, and her greatest scream can kill. To control her unrestrained voice, the angels forbid Madeline from embracing the emotions that strengthen her song. Anger. Fear.

The demon-hunter Damascus vows to defend Madeline from Hell’s relentless evil, but he cannot protect her from her own feelings. Though they deny their dangerous attraction, her guardian becomes her greatest temptation.

Surrendering to desire may awaken the gift suppressed within Madeline’s soul, and neither Heaven nor Hell will allow such absolute power to exist.

She flicked the light to her bedroom and dropped her towel in the hamper.

Her hand merely muffled the screeched yelp. Madeline fell backward, smacking against the closet. She tripped and clattered into the hamper. Damascus apologized, but her gasp shattered the perfume container on her vanity.

Madeline yanked the towel from the laundry. The wet scrap of material wove over her body, and she clutched the fraying edges.

Damascus’s silence stole any sound she might have uttered.

His muscles bound, tight and tensed, more prepared for war than the glimpse of her bared skin. The gold in his eyes burned molten. Madeline shifted, her bare toes gripping the carpet to prevent her from toppling over once more.

She shivered. It wasn’t the wet hair that whispered the goose bumps along her spine. Damascus saw far more than the thin strip of cloth hid. His gaze warmed her curves and tickled the swell of her breasts. Her nipples hardened. She prayed he hadn’t noticed.

The memory of the soap in the shower tortured the twisting in her lower belly. For a single, blissful, blasphemous moment, she imagined it had been Damascus’s hand washing her.

His every movement strengthened with need. The wild, uninhibited, dangerous desire would claim them both. Madeline clamored backward, the apology shrill and muffled by her hand.

She hadn’t needed to speak, drop the towel, or offer any secrets. The heat smoldering low escaped in a sigh. The soft puff promised more than she intended. She breathed an invitation.

Damascus shuddered. He blinked, hard, and rubbed his head.

“I apologize.” Damascus forced his words. “I… I didn’t mean to invade your privacy.”

Madeline tugged the towel lower over her thighs. “You didn’t know.”

“Don’t worry about it. Here.” She hobbled toward the robe lying over her bed.

Damascus’s motions stiffened. He retrieved the robe as Madeline lunged for the fuzzy pink arm. Her toes banged against the bedpost, and the surge of pain toppled her into Damascus’s waiting arms.

He smelled of the Realm, of warmth and radiance, citrus and holy incense.

The towel shifted, and his fingers brushed over her bare back. His calloused hands heated, as if he wielded his sword. The heat lashed her—a punishment seared within a delicious reward. The towel tumbled, and she pushed against him to hide what nearly exposed.

His embrace was everything as she imagined, the heat, the intensity of his grip, the fluttering within her stomach and her body upon his. His hands bound a supreme authority over her. He pressed her skin with possessive fingertips. He handled her as if she were delicate and precious.

The shock of it all drove her to silence.

He protected her, but he never held her.

Watched over her, but never touched her.

Saved her from demons, but never reassured her.

He never mourned with her when a Choir was killed.

Every moment hidden far from the Realm passed in painful isolation, and he was the lone simple comfort of home. The sweet, dangerous touch protected her more than his sword or his distant promises. The heat settled the dissonance capturing her mind.

The Realm forbid their touch. A hug cried sacrilege.

Madeline closed her eyes and rested her head on his shoulder.

Always! Ever since I was little!

Hmmm…I think I felt like had “made it” when I signed with my agent, but then it all *clicked* when I self-published and made that first sale.

For traditional, we’re still working on that. I have two books on submission waiting for homes, and the others I’ve self-published.

For a little longer! I graduated in 2009 with a degree in English…and I found a job as a bookkeeper. I’ve been working as a faux-accountant for about five years, though recently I’ve had enough momentum with my writing career that it looks like I can leave the office gig behind me and become a career author.

Sing For Me – If the demons stalking the theater don’t kill Madeline first, Heaven just might.

Usually only about fifty days, though I’m hoping to trim that to about a month for a 90k book.

I’ve always loved paranormal romance—I have tons of ideas for witches, vampires, werewolves, everything creepy/sexy/supernatural!  Sing For Me’s trilogy will be finished by the end of the summer, and then we’ve got a five-book series planned with a coven of feisty witches and then maybe something really dark, gothic, and sensual. So excited!

Paranormal Romance all the way!

Natalie, the director’s assistant in Sing For Me, is just so real to me. I really put a lot of myself in her—from her determination, her creativity, and her tendency to not assert herself as strongly as she needs to (though she will learn how over the series). She’s strong, even if she doesn’t realize it, and she’s devoted to her friends…and the angel she falls for.

This makes me sound crazy—I love listening to music when I write…but I normally only listen to one song. For the entire duration of the novel. It’s more like background noise that just helps me concentrate. For Sing For Me, I was listening to Guns N’ Roses Don’t Cry. Love that song!

Oh, God no. I try to avoid reviews at all costs. Goodreads terrifies me. I try to stay as far away as possible, hehe.

I wanted to ensure the angels had that biblical feel since the story itself isn’t actually inspirational or religious. So I picked Biblical cities for their names—Damascus, Shiloh, Tyre, Magdala, etc. It worked out really well, and it does give the angels a bit of an archaic quality.

I know the character completely before I start writing. I’m a compulsive plotter. I have to know everything that’ll happen in the book. Nothing is a mystery.

Confession: I haven’t purchased a paperback in years, and I don’t think I’ve ever bought a hardback. ;)

The Riddle Master of Hed and Alphabet of Thorn by Patricia A McKillip. Everything she writes is just absolutely beautiful. 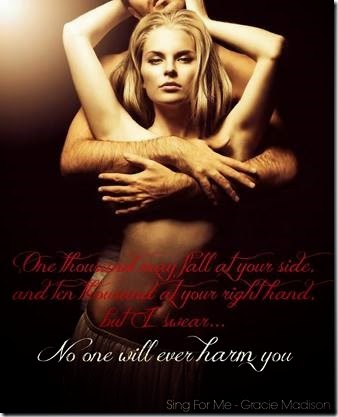 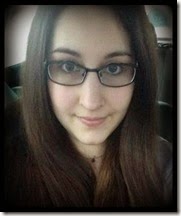 Gracie Madison would spend every day, all day writing…if it were socially acceptable. Ever since she was a little girl scribbling with a crayon, Gracie’s dedicated herself to her books and all the supernatural and paranormal, creepy and beautiful stories and characters born within the pages. Now Gracie is committed to finally sharing those books with the world. When the laptop is pried from her hands, Gracie is probably working her day job, rooting on the Steelers, or out with her husband searching for Pittsburgh’s best sushi. 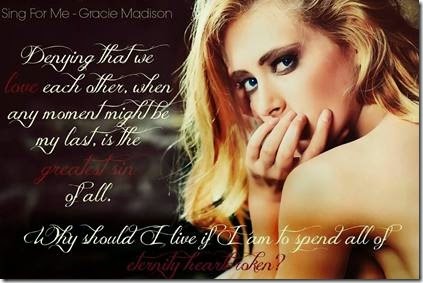