Author Interview with Julia Debski, author of The Hazel Tree

Today on the blog we have author Julia Debski fro an interview. Julia is the author of The Hazel Tree, today’s book blast. We would like to thank Julia for stopping by and sharing with us. 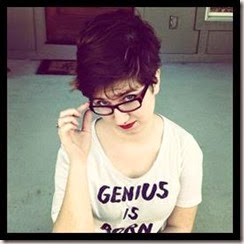 Julia Debski was born in Warsaw, Poland in 1996. Her family moved around a lot during her childhood before finally settling down in Chattanooga, Tennessee. It wasn't until the 8th grade that she found her passion for writing. It was thanks to a particularly inspiring English teacher and a story that needed to be told. So she began to write, and she never stopped.

Four years later she found herself with nearly a dozen started novels and short stories. As junior in high school she was introduced to Greg Wilkey, a self-published independent author of four novels. He soon became a mentor to her as she worked to write and self-publish her own novel. After two years of hard work, and a nearly a year of mentorship The Hazel Tree was published in October 2013.

I first considered myself a writer in the 8th grade, when I began writing my first novel. Before then, I never really took it seriously.

I work at Starbucks just over 30 hours a week. I’ve been working there since February, after basically pestering the manager on a weekly basis for months. It is actually the same Starbucks where I wrote and edited most of The Hazel Tree. It is an incredibly difficult and tiring job, but I really do love it. The people I work with are great, and it is a fun sort of chaos.

The Hazel Tree: it’s the elements of darkness and the struggle for freedom taken from the original fable and ancient mythology - it’s badass.

I am self-published, though I hope one day to be traditionally published.

It took me about a year and a half to write The Hazel Tree. I had the idea in November 2011, began writing it in December and finished in October 2013, but I took a “vacation” for about 3 months in the middle there. Oh! And I also wrote an additional chapter and added it to the novel this past February, which took about two weeks.

I’m working on a collection of short stories focusing on the different types of extraordinary relationships between humans in ordinary situations, and how it correlates to their environment. I didn’t start writing them with that concept in mind, but that seems to be the reoccurring theme with them! I also just started writing my new novel Along Shiloh. I’ll have more details in a few months, but in the meantime you can check out the Pinterest board for it here. (http://www.pinterest.com/julponey/along-shiloh-novel/)

In the future, I would like to try writing horror. I’ve read Steven King and some other lesser known authors who were very ‘hardcore’ horror - and I don’t think I could write that. My favorite is Jen Archer Wood’s Point Pleasant. It’s about the Mothman. (Note: don’t look it up at nighttime.) I loved her style of writing which was suspenseful and scary, but not too much. I’d like to write like her.

At the moment- Fantasy/Supernatural, Young Adult, Suspense, and Romance.

Despite the main characters of Ivy and Matthias, I think Naples is one of my favorite. He is so insane and sadistic, with a wicked sense of humor. Maybe it is just because I am in his head and know how life that I sympathize with him, in a way. He’s just such a fun character to write!

I’ve been writing on and off during my entire life, usually just to record my stories of make believe. It was never anything serious until

I do most of my writing at Starbucks now because my creativity thrives best around the sound of people and music mixed together. I also occasionally write at restaurants and dinner parties. (I once wrote in a pub for an hour. It was so much fun.) When I first sit down, it takes on average fifteen minutes of having to force myself before I get into a rhythm. I spend at least an hour writing, with usually a Passion Iced Tea or a hot Awake tea. I’m most productive when I write with Greg Wilkey, usually clocking about two thousand words in a couple hours. When writing by myself, I write about half of that.

I try to, yes. If it looks like something particularly hateful without any constructive criticism, I try and stay away from it though as I don’t like such senseless negativity. (And there have been a few!)

I began writing it under the title Cinderella Wolf, simply because it was a simple sum-up of two aspects of the book. (Not super creative, anyway.) The Hazel Tree came later, about the time I started to rewrite it, in January 2013.

I really love both paperbacks and hardbacks. Hardbacks feel more solid and I love holding it when I read, but they are often times bigger and harder to travel with, not to mention more expensive. I love either one, especially when the covers have texture to them, like silk and smooth and matte at the same time.

If you would like to find out more about this amazing author, check out the book blat below.