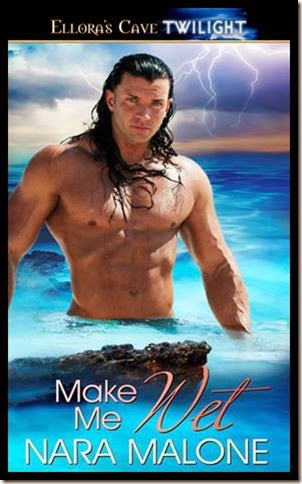 Make Me Wet
Passions Portal
Book 2
Nara Malone
Genre: Paranormal
Publisher: Ellora’s Cave
ISBN: 9781419948081
ASIN: B00GGMWAGI
Number of pages: 77
Word Count: 23,500
Cover Artist: Syneca
Ellora’s Cave ARe Amazon BN
Book Description:
Seven tears cast upon the water summon the selkie, summon seal across the ocean, summon man from beast—liquid keys to break the curse. Freed one night every seven years, Ronin is doomed to repeat that cycle into eternity. Unless he can find a woman powerful enough to resist a selkie’s irresistible pheromones and sex magick.
Maille believes she lost reality between Maine and New Mexico. Between where she is now and where she should be. She believes in facts, not magick. But facts can’t explain how she wound up naked on a beach with the sexiest man she’s ever laid eyes on. Or how she knows in her bones that losing herself in the passion Ronin offers is a path to disaster.
It’s going to be a long, hot, wet night. Caught between sex magick and a sexy selkie, disaster is inevitable for Maille. To break the enchantment she has to rely on the oldest magick of all—the power of love-drenched hearts.
Book Trailer: http://www.youtube.com/watch?v=yO2moGX-IhU

Copyright © NARA MALONE, 2013
All Rights Reserved, Ellora's Cave Publishing, Inc.
A piercing cry rose above the thunder of surf. Human? A seal could sound so human it was hard to tell the difference. Whichever, Maille recognized it as a wail of mortal distress. She couldn’t say how she understood that, no more than she could say how she wound up on the beach. One fact she was certain of—she couldn’t ignore it.
Without thought for consequences she plunged into the surf, diving under swells, power-stroking through roiling water.
Once past the breakers Maille paused, treading water as she turned in circles, searching in the inky swells for the curve of a human head. Impossible with the waves breaking moonlight into sequined facets and the rise and fall of swells tall as houses. She’d never find him. She needed him to cry out once more.
“Come on. Give me a hint.”
An irregular shape, not seal-like or wavelike, caught her attention. As she paddled closer, she made out a man waving, heard his hoarse cry before his head disappeared below a wave. He resurfaced choking.
She dove under the water, swimming straight for where she’d seen him last. She resurfaced as he went under again, but she was close enough now to reach his long hair, swirling like dark kelp in the water. She grabbed a handful.
It was surprisingly easy to pull him along, as if he had managed to overcome his instinctive terror and submit to her rescue. He might not have been so submissive had he realized, as she did now, that they weren’t making progress.
Riptide. Crap.
Maille fought down a sudden kick of panic in her chest, struggling to swim parallel to the shore, caught by swells that tossed them dangerously close to jagged rocks. She had to concentrate her energy on swimming north until they were beyond the rip where she was free to swim shoreward.
When her feet finally found ground, a wave slammed her, flinging them both onto the sand. Depositing them in a tangle of limbs. Maille on top.
A small wave washed over them, and the sensation was that of a liquid blanket settling around her shoulders and then melting away. Panting, draped over his body, Maille was too spent to lift her head from a pillow of seaweed.
Another wave swept up, warm liquid fingers caressing her thighs.
She needed to move him higher up the beach, away from the rising tide, see to his needs. With a groan she pushed up to hands and knees, still straddling his body.
Damn! She’d hauled in one hell of a wet dream. Jet-black hair fanned out on the sand. His body lean, long and lusciously muscled. She started to lick her lips, caught herself, and forced her tongue back in her mouth. She was supposed to be saving his life, not jumping his bones.
Something was wrong. That realization drowned attraction in a wave of adrenaline.
His chest didn’t seem to be moving. Her breath caught and her heartbeat kicked up to double time. Maille thought there’d been a slight rise and fall of his chest beneath her breasts when they’d first washed ashore. His lips looked blue. But when she put her ear to his chest, the beat of his heart was strong and quick.
She scraped her mind for facts.
Fact—a heart could beat for several minutes after breathing stopped.
Would his lips still be blue?
Fact—in the moonlight everything looked blue.
Fact—his eyelids were at half-mast, and there was a barely perceptible gleam aimed at her. He probably didn’t need to be resuscitated.
Fact—she could discover the state of his respiration in other ways than this slow descent of her head and the pressing of lips to his. He tasted like sin and secrets.
His lips were warm and firm under hers, and they parted in a humid mingling of breath. Goddess, he smelled wonderful. She inhaled the scent of male and mystery laced with magick. Worries over what was real, what wasn’t, where she was, trickled away like so many grains of sand.
Fact…
Fuck a bunch of facts.