Book Blast: Man on the Run by Gail Hamilton 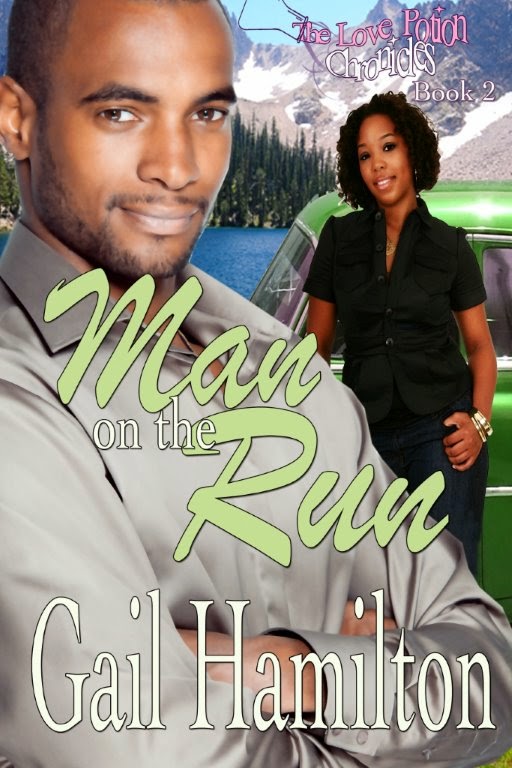 Lydia Marshall needs to round up the last samples of an unpredictable "relationship enhancer" created by her employer, NuGenn Pharmaceuticals. The last batch of the so-called potion is in the hands of a test subject, Damone Reid. But when Lydia finally tracks him down she's in for a shock. He is no longer the shy, awkward programmer she interviewed months before. Suddenly, she finds herself swept up in Damone's potion-fueled quest to live life to the fullest. They go kite flying.  They go whale watching. They go dancing in the moonlight.

Even though Lydia tries to keep things professional the former nerd's enthusiasm--and kisses--are infectious. As the tall, sexy adventurer takes her on a wild ride, Lydia finds herself falling for him. But is it the love potion that is igniting her feelings? And what will Damone do if he finds out her secret mission is to destroy the very thing that is changing his life? The discovery could destroy their blossoming romance.

Lydia asked to see Damone right away but Mrs. Benson shook her head.
"He's gone.  Packed a bag this morning and told me he was going on a trip to have some fun. Didn't know when he'd be back.  Whistling show tunes, he was, and said he meant to start at some place called Barrel-o-Thrills.  Took off before I could get another word out of him."
Hastily, Lydia thanked Mrs. Benson and rushed out to her car.  A quick search on her cell phone found Barrel-o-Thrills out on the edge of the city. It was a club specializing in bungee jumping. The website announced: Give yourself the thrill of a lifetime.  Your molecules will never be the same.
Lydia remembered the 50-foot railing and tore out of the driveway.  What if Damone came to real harm because of NuGenn!  What if he'd used too much of the potion and it had morphed into a thrill enhancer instead of a relationship enhancer!
Oh, the lawsuit!  Oh, the bad publicity!
By the time Lydia got to Barrel-o-Thrills, parked and paid admission, her heart was pounding.  She raced over to bungee towers just in time to see a long, gangling body flying through the air, arms and legs wind-milling, yelling with delight.  When she finally got to where the crew were slipping the harness from Damone, she could see what his grandmother meant. He was grinning even though, wobbling and whooping, he could barely stand upright.
Could the potion have done this? Lydia wondered again.
Or had he just discovered common recreational drugs?
Moving swiftly and decisively, she rushed over and grabbed Damone by the elbow.
"Let him go.  I'll take care of him from here," she told the crew chief.
Unclipping the last of the harness, the man shrugged and handed Damone over.  Reeling from the wild plunge, Damone staggered straight into Lydia.  Hanging on to stay upright, he blinked at her in disoriented, astonished surprise.
"Volta..." he gasped.
The next second, he flung both his arms around Lydia and started kissing her with a passion that curled her toes and shocked her at the same time.
In fact, Lydia was so shocked that she just stood there while Damone tightened his embrace even more.  His mouth feasted on hers with such total delight, and such complete abandon that the sensation swept away any resistance Lydia tried to muster.  The fellow was kissing her as though he hadn’t kissed a woman in ages--kissing as though he meant to claim every delicious pleasure he had missed living like a hermit in a basement.   Lydia could actually feel the determination rushing through him.

Gail Hamilton has been creating novels since the great romance boom of the eighties, writing for Harlequin and other publishers. She has been a farm hand, English teacher, ad copywriter, and once rode a British Bedford truck across the Sahara and back to see Timbuctu. All of it is fodder for her fiction. She is drawn to action, romance, adventure and characters with a distinctly odd twist. These show up in her many romance novels and her fast-moving historical novel, The Tomorrow Country.
After trying urban life in Europe and Toronto, Gail returned to live on the family farm where she grew up. In this rural corner hugging the north shore of Lake Ontario, Gail digs into the rich, raucous local history. She cherishes a secret passion for animated movies and loves snapping photos of nature all around her, reading the constant changes like a newspaper every morning. What better place to hatch brand new tales for everyone’s enjoyment.
Visit Gail’s website at www.gailhamiltonwriter.com.
Posted by authorkarenswart at 8:32 AM