Book Blast & Giveaway: A Demon in Love by @holleytrent 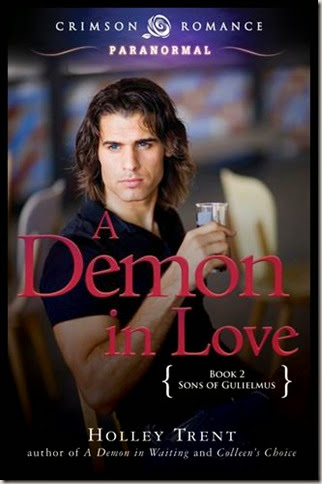 A Demon in Love

Charles Edison has spent most of his 123 years courting women for Hell. As a faithful son of the demon Gulielmus, he’s never known true affection for women. Which is funny, seeing as how he’s descended from a love god on his mother’s side. Now that he sees his brother falling head over heels, Charles wants the same for himself. He wants to belong to someone.

The Fates conspire to right old wrongs, and Charles learns the woman destined for him is one he shouldn’t want. Marion Wilder’s family has been on the supernatural Most Wanted List for twenty-five years because they were responsible for the demise of a demon. Gulielmus would kill her if he had the chance.

But Marion’s the only human woman Charles can touch without harming. She’s his one chance at having a normal life and a real family, and he would give up anything to keep her. Even his father’s favor.

She bent to pick up the receipt she’d dropped, and then yelped at the sight of the stranger six feet from her. She blew her fright away on an exhale and put her hand to her heart.

Why did they always frighten her? By now, she should have been used to strange men approaching her. Sometimes they heckled her—the “little girl” truck driver. Occasionally, they tried to sell her things. Dick and weed, mostly. One she didn’t partake in. The other she sure as shit wasn’t going to pay for, even if she were that kind of desperate.

She rolled her eyes and shook her head, hoping he’d catch the drift. Not that they ever did. Bozos.

“Cold night, isn’t it?” he asked. His voice was deep and cultured in the way Shakespearean actors’ voices were. Trained. Odd, seeing as how the only culture this guy had likely rubbed off from the newspapers he slept on. She cocked her head to the side and really studied him. Maybe he was experiencing some sort of delusion and believed he was on the set of a BBC miniseries or something. Maybe a modern retelling of The Taming of the Shrew. She knew which character she’d be cast as, and was already gearing up to play the role if he said something sufficiently stupid. And he would. There was always something wrong with these truck stop guys. Pity, because this one was hot. He had to be around six and a half feet tall, and a nicely proportionate breadth to go with that height. Not bulky, but there were definitely some muscles beneath that jacket. He had to outweigh her by a good hundred pounds.

He fixed a stare on her she couldn’t tell was from blue or gray eyes beneath the pole light, but either way, it was oddly mesmerizing. She couldn’t bring herself to break free of it, although it somehow made her feel exposed.

Why was he looking at her like that—like he knew her? She’d never seen the man before. She certainly would have remembered those startling eyes and all that dark hair. Jesus, she liked a bit of mane on her men. Someone could slap him on the cover of a romance novel. Just wrap him in tartan, hand him a sword, and set up an unobtainable fantasy for a few thousand women.

She pursed her lips, considering him. Nah, she’d read probably a hundred thrift store romance novels in the past year, and this guy was too tan to be a Scotsman and not dark enough to be a sheikh. Greek tycoon, maybe? Oh yeah. Put him on the deck of a yacht wearing some of those little European swim trunks and—

“Isn’t it?” he repeated, and raised one dark eyebrow.

“Huh?” She blinked. Did he want something?

He shifted his weight and shoved his hands into the pockets of his leather jacket, grinning at her. Shit, he could have lit up the entire parking lot with that smile. He was so pretty—now, what did he want with her? Whatever it was, she wasn’t paying for it.

She closed her eyes and drew in a bolstering breath. “It’s cold,” she said blandly and hauled her toolbox up into her truck cab.

“Montana’s a pretty inhospitable place, huh? There’s still a month until winter, but I don’t think the snow cares about timeliness.”

“Mm-hmm.” She patted her pockets in search of her keys. The next thing he’d probably say was that he could make it a lot more hospitable for her, if she had enough cash.

Prostitutes were pretty predictable, and she certainly got propositioned enough, though usually the truck stop hos were a little less—upright.

But, shit, did she really look like the kind of woman who’d pay a man for sex? She wrapped her fingers around the handle, prepared to slam the door.

He moved closer and grabbed the door’s edge before she could pull it. “Hey, why don’t you let me buy you a cup of coffee? You look like you could use a cup.”

She could afford her own coffee, obviously, but no prostitute had ever offered to buy her anything. Must have been a new sales strategy—the hook ’em, then hump ’em.

She just wanted to get back on the road, but he was right. She did need to refill her thermos, fiend that she was. Coffee was her one vice, and she’d forgotten to take the canister into the restaurant with her during dinner. She didn’t want to give the guy the satisfaction, though, no matter how good he looked.

She let her gaze fall on him once again. He looked harmless enough, with his easy stance and hands jammed into the pockets of his coat. His boots were actually quite good quality. Brown leather with some scuffs. Broken in, and wet from snow, but they looked damned expensive. Didn’t seem like hand-me-downs, either. The heels were too good.

There must have been good money in truck stop whoring.

“No, thank you,” she finally managed, and gripped the door handle again after two failed attempts. “I-I need to get back on the road and get this load delivered.”

“Must be lonely,” he said. His grin waned slowly, and this time it was he who looked away, toward a truck entering the lot. He waited until it had circled around to the gas pumps.

“It’s a job,” she said when he looked up again. Damn, those eyes. They were so sad, and for some reason, that made her a little sad, too. 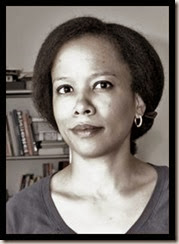 Holley Trent is a Carolina girl gone west. Raised in rural coastal North Carolina, she currently resides on the Colorado Front Range with her family. She writes sassy contemporary and quirky paranormal romances set in her home state.

She’s hard at work writing other stories set in the Sons of Gulielmus world, including one for the mysterious Creole cambion Claude.

See Holley’s complete backlist of paranormal and contemporary romances at her website, http://www.holleytrent.com. When she’s not on deadline, she boldly tweets under the handle @holleytrent.